The Real World Explodes in Change

So has finally prepared himself with a rebuttal lecture about how everyone might want to expose themselves in some way, but it is highly selective. Feelings, bodies, beliefs, experiences, actions. It is more of a matrix of things that people want to expose or hide. Some people, like Bagman, want to throw off all their clothes. Others simply want to take off their hat and hang it on the hatrack, or change their socks. Also, there is selectivity among what other want to see exposed in front of them. Some people will pay admission to see what other’s run screaming from. is prepared for rebuttal and lifts the phone to call Bagman in to continue the debate when…

Lights flash and loud sirens sound throughout the Bagman and brownstone. The real world shuts down the blog with a metallic clang and the voice of the protoplasmic benefactor landlord who actually writes this blog takes over suddenly.

I’m sorry to interrupt this blog, but Monday around , the phone rang in my office. I picked it up and the voice on the other end was the last voice I ever expected to hear. “Dad?” asks my son, Brian. His voice is breaking, scared, emotional.

: You might want to explain to the audience -- which you are probably losing fast -- why your son’s voice was the last voice you expected to hear. 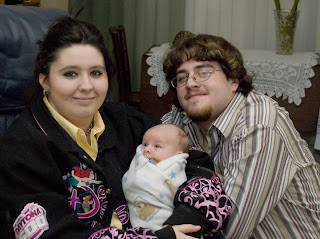 My son’s voice was the last voice I expected to hear because six months ago my wife and I had a huge blow-out with him and his new wife, Melody. It began months before when we first met her and we sitting in a restaurant and they were telling us about her parents and how we were very different from them. Her father’s name was…

BAGMAN: This isn’t the History of the World in 20 Volumes! Get to the point!

BAGMAN: I know you are a long-winded baby boomer, but try it in bullet points for a change!

Okay! Romeo and Juliet. Hatfields and McCoys. Parents try to control newlyweds. Newlyweds revolt. Parents know what’s best. Newlyweds say nasty things. Parents say nasty things. Everyone finally says those things that you always keep inside because know that saying them will be the final trigger pull you can’t call back. I never want to talk to you again! You’ll never see your grandchild! Newlyweds leave the McCoys and go live with the Hatfields. Everyone’s parting words are: “Go F….!”

Then began months of silence. Emotional vacuum. Christmas cards torn up and returned. Smoldering anger. Guilt. Simultaneous terror and determination that we will go to the grave like this.

BAGMAN: Damn it! You’re the only one I know who can be long-winded with bullet points!!

So the phone rings and it is Brian and he and his wife have now had a fight with the Hatfields and are walking in the rain with their month-old baby and need help. The odd thing about parents and children (and maybe everyone else) is that love can always blow away a mushroom cloud in a heartbeat and forgive the unforgivable with single sob on the phone line.

Suddenly my job is an irrelevant blur, my wife and I speed through a steady rain to a truck stop and we all embrace and cry and hold the new grandson who is crying for several other unrelated reasons. Tears, laughter, apologies, forgivings. Bagman is running the extremes of emotions. But is already beginning to cope with an incredible set of totally new logistics.

How do the Montagues get Romeo and Juliet’s clothes, crib, baby stuff, and beloved pets out of the Capulet’s Castle? When did you eat last? How many dogs did Romeo say they had? Where will we put everything! 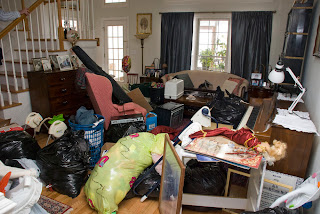 So for the moment Bagman and are on hold and...

BAGMAN/BUTLER: “No we’re not! We’re still here! Making sure you don’t screw up too much in either direction!”

At least, everything has changed. Last week there were two people aging faster than normal, a deaf cocker spaniel and two cats. There was an intensity of silence that only occurs when you know there should be crying but there isn’t even that. Today there are four adults exhausting themselves with a million chores, an infant, a friendly rottweiler with the biggest and most active tongue in caninedom, two frenetic mutts, two cats, and Sally, the deaf cocker who looks around smiling at everything. The furniture and belongings of two households are crammed into one, day and night have merged into one continuous flow, and there is dog poop everywhere.

: Are you finished? Can I make my rebuttal to Bagman now? 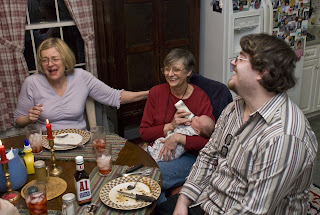 Maybe when things settle down a little bit more. Meanwhile I’m going to stop typing and go hold the baby.