This message brought to you by verbs and nouns

For the third time since I had come home from work, yesterday, Sally wanted to go outside for a walk. Sally is sweet cocker spaniel, over 90 years old in human years, deaf and rheumy eyed. Our neighborhood is quiet but there is a street and cars drive on it and the little manmade pond in back is natural looking enough to fool alligators into living in it from time to time. So Sally now walks, sniffs, and poops at the end of a leash. 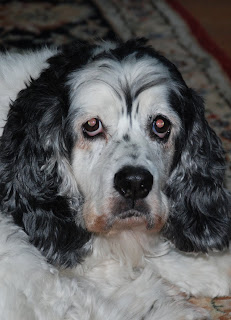 She has learned to milk it for all its worth. Whether she is in an emergency “take me out immediately or I dump on the rug” mode or simply conning me, her routine is the same. She will come over to the couch where I am lying and stare at me. Then she will turn around once in a circle and stare at me again. If that doesn’t work she will go over to where Karen is lying and do the same thing, at which point, Karen will say, “Mark. I think Sally wants to go out.”

And one of my internal voices will start up: “I worked all day too and I walked her the last time and she doesn’t really have to go and she’s just doing this because I finally got to open my book and why am I always the one and blah blah blah.” Thankfully this is always a silent voice - Butler’s I think, although it has the energy of Bagman. Outwardly my larynx only comes up with, “Hrumpf.” I am resigned to the case law established over 17 years that walking Sally is my responsibility.

Here is where a wonderful new understanding of verbs and nouns has made the difference. In The Shack (two thumbs up) the idea was mentioned that God is a verb and not a noun. When I was reading it last week, in between walking Sally, I realized that verbs were warmer and nicer than nouns.

The aha moment came when I thought about responsibility. I hate responsibility. But I love to respond. I’m angry when I think of my responsibility to walk the stupid, old, manipulative dog! But I love responding to my old four-legged friend. When I realize this, my internal voice – this time Bagman’s, I think – my internal monologue and mouth say the same thing, “Come on, Sally, let’s go see what smells are out there.”

The couch will always be there and I don’t know how much longer Sally will be around. Although the way she spins around in little circles and wags her stump of a tail when I go for the leash, I think she still has plenty of excited energy to last for a long time. It makes me smile and be grateful for verbs.
Posted by Bagman and Butler at 5:46 AM