Friday Shootout - I am NOT a collector! I'm NOT!

Reaching the door, I have an uneasy mixture of feelings – guilt, embarrassment, denial (which is not a river in Egypt). Philosophically, I do NOT believe in collecting. “If we collect things, we become prisoners of our own possessions,” I mutter, unaware that I am beginning to talk to myself out loud again.

My soliloquy continues, “Collecting is an obsessive connection to the past that prevents us from living in the present! I do not collect things because I believe in the Zen Buddhist tradition of Carpe Diem.”

BUTLER (who has suddenly appeared behind me, pushes me through the door): “First of all, Carpe Diem is not Zen Buddhism! Carpe Diem is a literary term from English Literature 101. And, secondly, it’s time you finally came to terms with your addiction to collecting!”

BAGMAN (Leaping forward and pushing Butler out of the way): “Mark! Mark! I’m glad you’re here! Tell Butler that he can’t exclude MY collection from this shootout!”

Confused, I look to Butler for assistance.

BUTLER: (whispering): “You know his collection. The one he hid under his bed when he was a teenager.”

This is quickly going from bad to worse. I make a last ditch effort to escape but Butler has barred the door. I don’t know what Butler has planned for me.  But I do know Bagman and I know darned well that we’re not going to display his collection in any G-rated blog, and I tell him so.

BAGMAN (Red with anger): “You are both prudish wusses!” He leaves, slamming the door hard enough to break the molding. Again.

So Butler and I are now alone in the studio and I’m shaking my head and continuing to deny that I have any interest in collecting things. Don’t over-emphasize the past. Live in the present. Don't be tied down with possessions.  That’s my motto.  "I'm free of material things,"  I argue to Butler.  "Show me one thing that I collect.  Just show me!"

BUTLER: “What about your coin collection? You’ve been collecting coins since you were 15.” 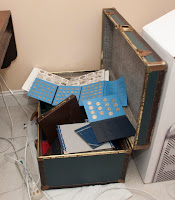 “Numismatics,” I protest. It’s a science, not to mention an investment.”

BUTLER: “Phooey! You have no intention of selling any of them. And how about the old bottle collection?”

“No. Those are Karen’s. She had them when we got married. She loves auctions and antique stores. I just tag along to keep her company.”

BUTLER: “Except YOU were the one who kept buying old advertising signs.” 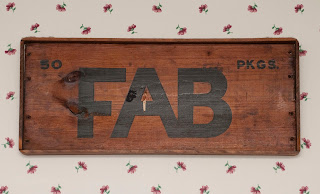 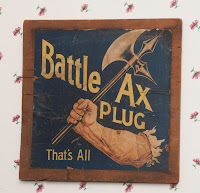 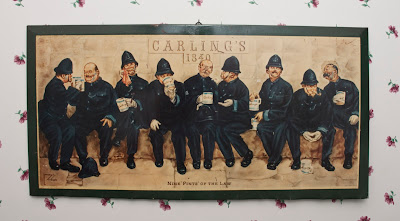 I'm having trouble concentrating on what Butler is saying because I've just realized how ugly our wallpaper is.
BUTLER: “And seashells! 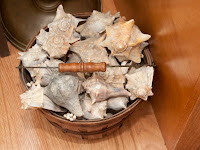 “Hey! We live on the coast! Everybody who goes to the beach picks up seashells.”
BUTLER: “Except not everybody gets up in the middle of a tropical storm and goes to the beach with a flashlight in the rain!”
“But it was also low tide and high waves and and I wanted to get there before the beach got picked over!"

"But I found this,"  I protest sheepishly. 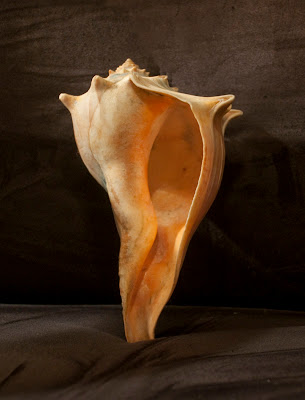 But but now I am beginning to doubt myself.  Beachcombing for seashells at night in gale winds and pouring rain does seem to be just a tad on the obsessive side of collecting.

BUTLER: “And how about toys!” 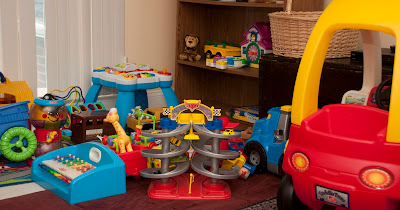 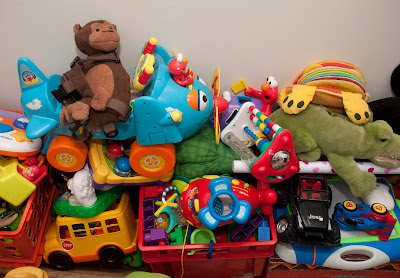 “No, Butler. You’re wrong this time. We have to have toys for the grandchildren!”

BUTLER:  "So why is Captain Jean-Luc Picard in your desk drawer at work!? 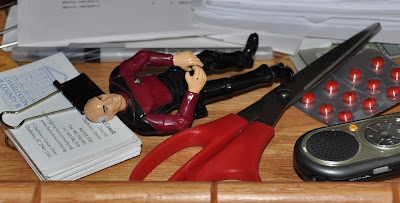 I desperately try to rationalise, "Motivation when things get tough?"
BUTLER:  "Not even close!  And then there's your collection of old picture frames." 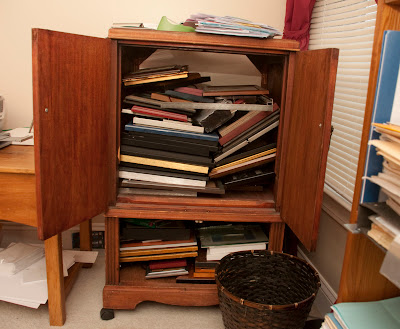 BUTLER:  "You had more room for them before you let the grandchildren have your studio and moved into the spare studio.  And then there is your collection of old negatives..."'﻿ 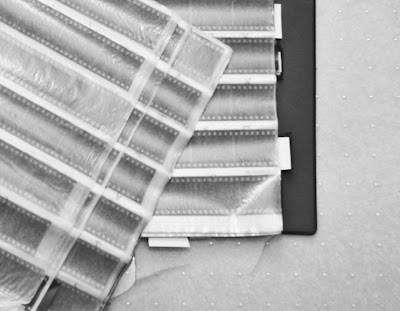 “But I’m a photographer, for gosh sakes!”


“Hey!  If it weren’t for this blog, you and Bagman wouldn’t even exist!” I argue.
BUTLER: “Don’t make this about me! And besides, not every blogger prints up all their blogs and binds them in notebooks! You’re a collector! Admit it! 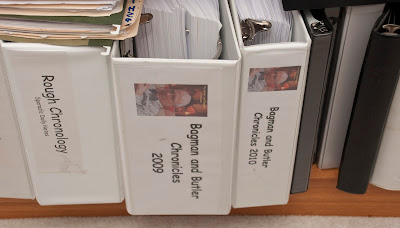 I finally collapse in defeat. Yes, yes…I AM a collector. I admit it! I even collect things that can’t be photographed – like databases that I have kept for years that document all the movies my wife and I have seen together, funny bumper stickers I have spotted on the road, jokes I have heard. Heaven help me! I record all these things in databases!
BUTLER (A little more gently, now that he has broken through my denial) “And don’t forget the dreams.”
Tears and confessions are now pouring out of me. Yes. Yes. I can’t show pictures of them, but I have even kept a database of my dreams for 15 years. I even cross reference them by images, themes and keywords.

BUTLER: “And just recently you’ve started collecting meaningless numbers and putting them in spreadsheets, haven't you?”

“But that's information I need for investing.”

BUTLER: “Good luck with that one, Mark! Just let it all out and you’ll feel better. Admit that you like numbers and statistics all by themselves.  If you can count or measure something, you put it in a spreadsheet and make a graph of it.  Don't you?
“I do! I do!” I bawl, tears of relief flowing freely.  “I admit that I’m powerless over collecting and that my life has become unmanageable!”

BUTLER: “I’m glad you’ve taken the first step. Although I do have one question. I’ve never really been sure about the coat hanger collection.”

I am free to laugh again and I do so with gusto.  "No, my friend.  The coat hangers are not really collections.  They are more like colonies.  Coat hangers are really living alien creatures that reproduce in closets when we are sleeping.  That’s why we find them so tangled up all the time. And every time you open the closet door you notice that there are more and more coat hangers than there were the day before.  I thought everybody knew that.
BUTLER: “Okay. But one last question. Why are they are called coat hangers when mostly you use them to hang pants, shirts and dresses?”
I don’t know the answer to that and I fall silent.  I’m still a little confused but hopeful that I can follow the steps of recovery from my collecting addiction.  Finally, I look up, make eye contact with Butler, and say,
"Thanks for helping me see the truth.  Do you know where there is a Collectors Anonymous meeting I could go to tonight?”