Last week was the 150th anniversary of the start of the Civil War -- the bombardment of Fort Sumter!

Having worked in and around state and local government in Charleston, South Carolina for the past 13 years, I have gained a gut understanding of why the "War of Aggression" began in South Carolina and, more specifically, Charleston.   South Carolina politicians know more about everything than anyone else in the world -- including each other.

There has been a lot of rancor in the editorial pages locally about so much hoopla around Fort Sumter.  Fuel has been added to the fire about whether the South seceded over slavery or the state's right to make its own decisions. Re-enactors mostly argue it was over State's Rights.  I tend to agree.  Of course it was over the State's Right to own slaves!  It would be nice if there is just as much hoopla and celebration over the 150th anniversary of the end of the Civil War!

BAGMAN:  "Can you get off the soapbox and show the re-enactment!"

BUTLER:  "And educate us all about what really happened?"

Certainly.  I was just making some commentary so I didn't feel guilty about not boycotting the Fort Sumter thing.  But re-enactors had brought in cannons from all over the Unites States and they were making big booming noises and I wanted to take pictures of something this week.

So anyhow.  Here is the real story.  Re-enactors don't lie because they like to do everything the way it was done back then.  They sleep in tents on straw mats in between collecting money from tourists.  The die hard re-enactors, they tell me, actually wear woolen underwear under their uniforms.

First of all the Civil War would have started months earlier but the politicians could't come to agreement over what they wanted to call themselves.  Were they going to be a confederacy, a republic, a renegade band, or a utopia.   Many wanted to call themselves a Union but that name was already taken.  Of course that didn't stop the labor movement from using it many years later. 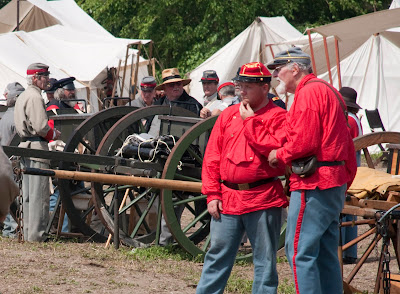 Discussing whether they should shoot at Yankees today or tomorrow and arguing over the best laundry detergent for woolen underpants.  They are also arguing over whether uniforms should be red or grey.
Which brings up one question I've never understood.  If war hadn't been declared yet and the Confederacy wasn't a Confederacy yet -- where did the first uniforms come from?   Did they sew really fast so they would look good?  Or had they been making uniforms for years on the off chance that their might be a war sometime.

But eventually they pitched their artillary battery camps on high bluffs overlooking Charleston Harbor and the historic Fort Sumter -- although it wasn't historic yet.   It is also very difficult to find high bluffs anywhere around here, so any small hill had to suffice. 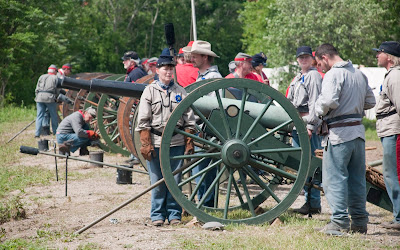 Unlike later battles, the strategy was not rocket science.  This was handy since rockets had not yet become really popular.  They lined their cannons up and from what I could see at the re-enactment they spent a lot of time fiddling around with them and admiring them. 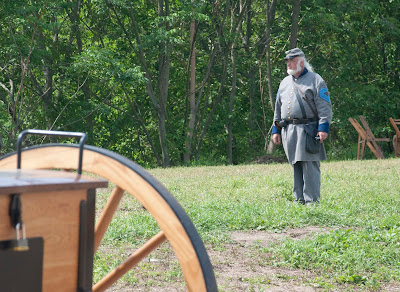 The head guy in charge stood back way from the cannon fiddling in order to keep a broad perspective and appear aloof and special, thinking about strategy and where he might find a better tailor. 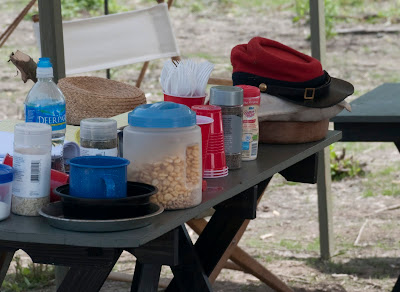 The Confederacy survived not on grits as historians have thought, but on Kellogs Corn Pops and bottled water.  Either that or the re-enactor that lived in this tent was not one of those who had woolen underwear. 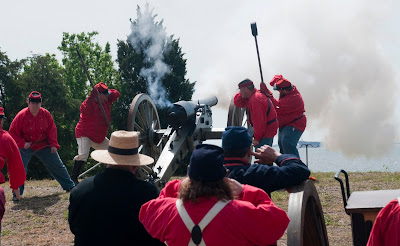 Eventually they fired the cannons.  (Butler wanted me to note that the re-enactors actually fired the first shot at 6:45 in the morning to maintain historical accuracy.  But I did not get up that early.  I also don't own any woolen underwear.)
Another fact is that not a single Union soldier died at Fort Sumter during the bombardment, although one was killed during the surrender when the Confederacy allowed the Union troops to fire a salute and his gun exploded.   The Fort suffered damage but no-one was killed.  This always seemed strange until I attended the re-enactment and noticed two little known facts. 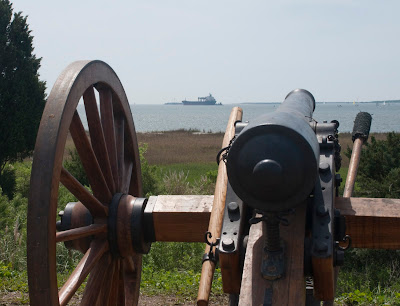 First, despite much fiddling and the broad perspective of the guy in charge, their aim seemed to pull slightly to the right.
Secondly, if you look carefully you will see that the Union Troops had protected Fort Sumter by arranging to have a large container ship, containing cheap plastic toys from China, pull in front of the Fort to shield it from the cannons. 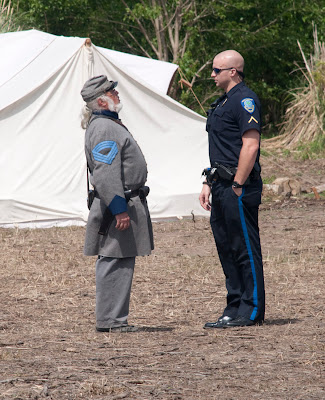 Another little known fact is that, shortly after the bombardment began, the Mount Pleasant Police Department arrived. 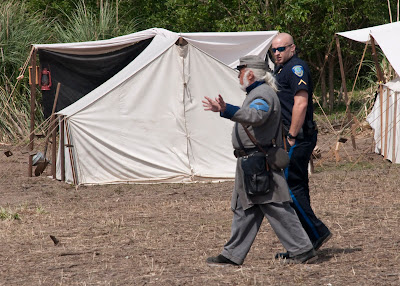 "We're not doing anything, officer.  Just having a little fun." 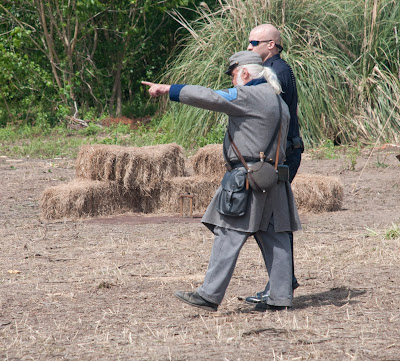 "Besides!  They started it with all that emancipation stuff!"
But after some more political wrangling and debate over the town's noise ordinance... 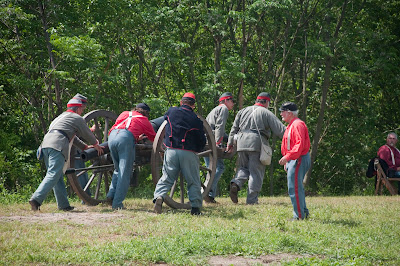 ...the Confederacy moved it's cannons to an area that was zoned for loud noises.
And that is how the Civil War actually began.
(My apologies, in advance -- or maybe after the fact -- to Civil War re-enactors who might feel I am making fun of a very serious subject or to History buffs who may not feel my account is accurate.  But I've been told that re-enactors are very true to history and these were my observations and my own interpretations of what I saw.)
Posted by Bagman and Butler at 5:49 PM