First of all, I got my days mixed up. (But at least I have my post already done for next week.

Secondly, I found myself unable to identify a favorite quotes although my head was full of old maxims -- A penny saved is a penny earned or the early bird gets the worm (although I often wondered if that translated into "the early worm gets eaten by the bird?")....

But Friday is already half over but I'll come in late. Better late than never. Hey! That's a quote!

And trying to find a quote and match a picture with it....anyhow, I did the reverse....found some old pictures that illustrated one aspect of Charleston -- re-enacting the Civil War.

Personally, I think all wars suck. What kind of species tries to annihilate other members of its species because of collective self-righteousness. No matter which side of whatever war you look at, there are "leaders" at the top who are blinded by their own interpretation of truth. Oops! I'm on a soapbox.

But while I'm on the soapbox, I should risk offending my fellow South Carolinians and mention that I'm not really all that fond of Civil War Re-enactments either. But they are very popular in Charleston -- at least among the white folk. All the re-enactors claim loudly in newspaper editorials that they are only honoring history. But somehow I think that at least some of them wish that they could re-enact it with a different outcome. 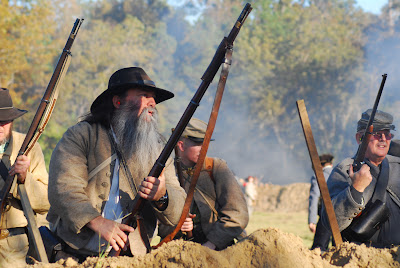 And most of them, I think, just enjoy running around and playing with guns. 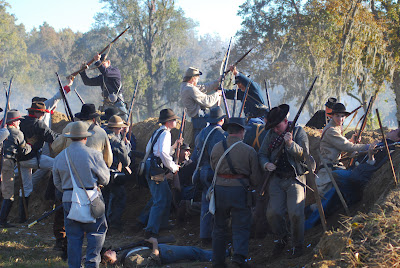 And yet, I've attended a few re-enactments to shoot pictures because they offer lots of unusual photo opportunities. And probably, if I had to look deeper into the darker recesses of my soul, for the same reason that I crane my head to see what I can see when I drive past an automobile accident.

Anyhow - I did find some quotes I like to go along with them:

Give me the money that has been spent in war and I will clothe every man, woman, and child in an attire of which kings and queens will be proud. I will build a schoolhouse in every valley over the whole earth. I will crown every hillside with a place of worship consecrated to peace. ~Charles Sumner


War does not determine who is right - only who is left. ~Bertrand Russell


It'll be a great day when education gets all the money it wants and the Air Force has to hold a bake sale to buy bombers. ~Author unknown, quoted in You Said a Mouthful edited by Ronald D. Fuchs


I dream of giving birth to a child who will ask, "Mother, what was war?" ~Eve Merriam