A quick follow-up on the mother duck who took up roosting in the pinestraw next to our front door. 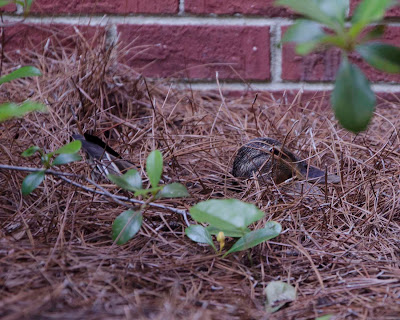 I was prepared for some great mother and duckling shots!  I had checked out the sunlight so that when they hatched, I'd be prepared to get shots when the low angle light was just right in the afternoon.  We had kept the area as safe as possible...

We are also having our roof replaced in hopes that a new roof might possibly be a perk to get someone to buy our house before we have to back out of our deal on the new one we are building.   So we had negotiated with all the roofers who bid on the job, showing them the duck and asking how they would protect it when slinging shingles.   Everyone assured us that the duck would be safe.

...that was when they were bidding for the job and promising anything.

It all came together on Memorial Day.   The roofers has completed the back and were just about to start on the front.   They showed up at 7:30 a.m.   Roofers work long hard sweaty hours.

The ducklings also showed up at 7:30 a.m.   Maybe  they showed up late the day before, but we first saw them in the morning.  A fabulously photogenic flock of fluffy fleathers and a mother duck who seemed much better at handling babies than I am.   She was calm and proud.  I was holding Kay, trying to keep Conner and Noah from charging the nest and basically running around like a chicken with my head cut-off.

Yes, that was a rather fowl metaphor.

BUTLER: "And rather foul as well."

Another voice in my head kept reminding me, "You are carrying a baby and trying to herd two toddlers.  The camera will have to wait.  Besides, the light is terrible.  You will have to use a flash.  Wait until after noon."

And the roofers were also running around confused and upset because they didn't have a clue how they could honor the promise their boss had made to protect the ducklings.

"We can throw the old shingles far enough to avoid hitting the ducks but we can't guarantee that some loose shingles don't slide down the roof -- it has a steep pitch."

"Maybe we can gently place a table over the nest to protect it."

No matter how lovingly gentle the roofers were, the mother duck wasn't going along with the plan.  The roofers might have been sweet caring gentlemen but to her they looked like giant, unkempt ogres with beer bellies, multiple tatoos, reeking of cigarette smoke and sweat -- not an inaccurate image, I should add.  They were roofers, after all.  And they were being polite because we were paying the bill but I suspect they would have been happier to take the shotguns off their gun racks and create lunch.

So mother duck bolted from under the table and settled ten feet away under a bush.

"She'll actually be safe there," the roofers promised.

"Get the camera," said the voice in my head.

So, this time the photographer in me won, and I dragged Conner and Noah inside where they both began screaming because they wanted to pick up the ducklings.  Kay responded by pooping copiously in her diaper and being the nice guy I am, I changed her before giving her to Karen.

The roofers were all smiling and laughing and my first thought was that they had secured dinner.  But then I saw where they were pointing.   Mother duck and nine (count them, nine) ducklings had already decided to accelerate swimming lessons and had waddled four backyards away and were disappearing into the pond.   By the time I got there, they looked like tiny dots and they would make it the bushes on the other side of the pond before I could go back and get my telephoto.

SO NO PICTURES EITHER.

So now it is Tuesday.  Conner and Noah are at daycare.  Karen is at work.  Kay is asleep in her crib which is a major accomplishment that can only be done by babies since the entire house is reverberating like a war zone with the nail guns firing constantly on the roof while Daisy is frantic, running from room to room barking constantly.

Some nature photographer I am...
﻿