I was scanning old photographs this morning and came across this weird poster I made in 2005 in an attack of grotesque humor.

BAGMAN: "NO! NO! Please don't bring up our prostate thing again!!"

BUTLER: "Why not? Does it make you feel like less of a man?"

BUTLER: "And you have a very narrow definition."

BAGMAN: "But it's a really fun definition."

Anyhow, leaving the boys to argue it out, I made the poster below for the grand occasion of the removal of my prostate at the Medical University of South Carolina Hospital by Dr. Tom Keane (whose head is on the football player). It was a kind of primitive thing (the resolution is so poor you may have trouble seeing) that I did before my prostate surgury and slipped it under my gown so Dr. Keane would discover it in the operating room. 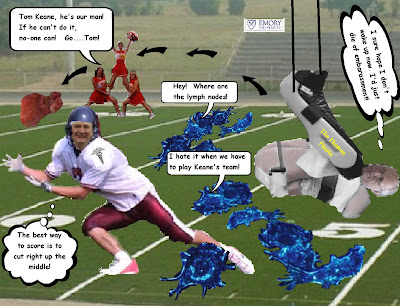 Primitive as it was, I think Tom liked it because he scolded me later for holding up the surgery for ten minutes while they all laughed and had to get their hands steady again. A couple of explanations, I guess. Emory was where Dr. Keane got the Dr. before his name. That red thing that looks like a turkey flying through the air is what a prostate actually looks like, although I did not photograph it. The blue things are lymph nodes and we all know that we don't want the lymph nodes intercepting any cancer cells.

And the wierd contraption that my face is pasted onto is...well, you probably don't really want to know (I'm sure I didn't want to know!)...the way Dr. Keane has invented gain access to the way he does his "procedure." On the plus side, it leaves a smaller cut. On the minus side the cut is located in a less pleasant place.

BUTLER: "And fortunately for me, Mark, and 50% of the world's population, you can't! So take that...nyah nyah nyah."

Take it easy on him, Butler, old man, Bagman's heart was always in the right place...more or less...and he's paid his dues (obviously), so cut him a little slack.