Bagman and Butler get a letter

The atmosphere in the Butler and Bagman Studio is an odd combination of sadness, resentment, and boredom. Butler is working on an absolutely meaningless photograph of a weird pseudo-classic yuppy subdivision in Mount Pleasant where real estate developers have made millions creating a kind of upscale Disneyworld called I'on. 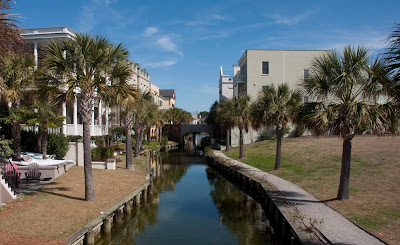 Meanwhile, Bagman is throwing darts at a photograph of Mark that he has hung on the wall.

It is so quiet that they both can clearly hear the rustle of a letter dropping through the mail slot. Butler walks over and picks it up.

BUTLER: "Should I read it to you?"

Another dart flies through the air and imbeds itself in Mark's bald head with a sound that resembles "Thwip."

BUTLER (Reading): "Dear Bagman and Butler. I suppose you guys must be mad at me by now for ignoring you and missing the last two shootouts. I could give you the usual excuses of being too busy. It would be accurate. The grandchildren have been unusually time-consuming and work has been crazy, trying to tie up loose ends prior to my retirement in two weeks..."

BAGMAN: "Bull! He's a lame duck at work! How can he say he's busy when everything has been transferred to his successor already and all he does is stare at the bloody wall!"

BUTLER (Ignoring Bagman and continuing to read): "But the deeper truth is..."

BAGMAN: "Deeper truth my butt! He's lazier than I am!" Thwip twhip thwip.

BUTLER (Starting the sentence over): "But the deeper truth is that I can't figure out what to say. Or think. I know I should be dancing on the table about retiring. At least everybody seems to think so. Congratulations and expressions of envy abound. Yet I think there is also some kind of deeper transition going on. Maybe I have more ego than I think.

BUTLER (Nods in agreement, then continues): "I have been a (finger quotes) Executive Director for so long. Now I look in my closet and see dress shirts, slacks, ties and suits and they are just hanging there with nobody in them. I go to work and there are no messages on my phone, no letters in my inbox. For the next 13 days, work will swirl around me. I feel a little bit like a ghost. It is rather nice to have no stress but it feels weird.

Anyhow, I will be back in a while, Bagman and Butler. I hope you guys are well and I’ll see you soon.”

BUTLER (Folding up the letter and putting it back in the envelope): “Well, at least he’s alive.”

BAGMAN: “Humph.  At  least he realizes his humble act isn't cutting it any more.”

BUTLER:  "You should talk!"
Thwip.