BOTH LATE AND PLAGERISTIC
I pop unexpectedly into the Bagman and Butler studio. Neither of them are impressed and both of them nursing resentments because I’ve been ignoring them.

BAGMAN: “What the frammatz do you want?” (Except he didn’t use the word “frammatz” (which is not actually a word anyhow)).

BUTLER: “I didn’t think that meant anything to you anymore and, besides, it will be Saturday in a few more hours.”

“I know. I know,” I say knowingly. “But I don’t have time to argue. But I think we can get in a small post although it may be cheating since I didn’t actually take the photographs.”

BUTLER: “That really is cheating! If there are any Friday Shootout rules worth enforcing -- using your own photographs is one of them. You should NOT post these! Just go back to your room and keep moping about your retirement identity conflicts.”

"But it’s almost not cheating because, while I didn’t take the pictures, I’m in them. The staff at Charleston Center threw a Retirement Party for me and five other people who were also retiring and it had a St. Patrick’s Day theme!

BAGMAN: “You sure it wasn’t really a St. Patrick’s Day party and your ego just convinced yourself it was all about you?” 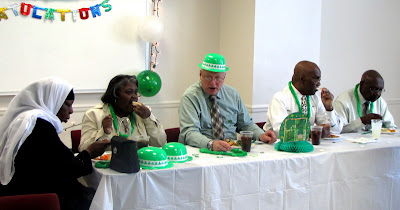 BUTLER: “I only count four other people.”

“The sixth one was late. Don’t be so picky.”

BAGMAN: “If I didn't know better, I'd think you'd been drinking.” 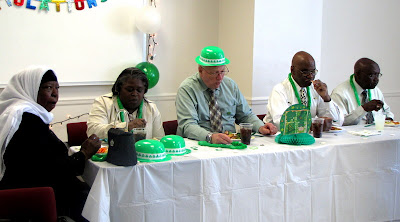 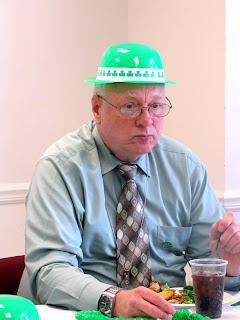 “How about this one?” I say testily. 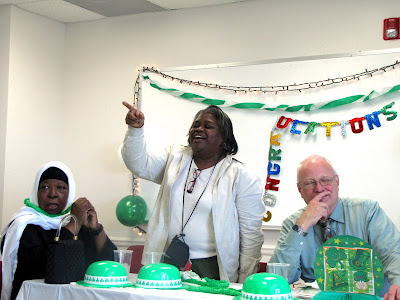 BAGMAN: “Your eyes are closed!  Couldn’t stay awake for your own party, huh?"

BUTLER:  "The Congratulations are not holding up very well."

BAGMAN:  "And he's wiping his nose in his sleep!"

I give up and leave the room to avoid further abuse.   From now on, I will have more empathy with my wife when she sees an unflattering picture of herself that I have taken and tells me to delete it immediately.

Posted by Bagman and Butler at 2:38 AM