The topic for tomorrow's Photo Shootout is "Public Artwork" -- chosen by Barry.  And it threw me into fits of nostalgia.  With Bruce Springfield singing "Glory Days" in the background, I've been sorting through old research notes, faded black and white 8x10's, and manuscript for a never-to-be-published book I worked on in 1973 about Boston Statues.

My grandfather hated Boston Statues.  I've written about him in earlier blogs -- an artist who studied in Europe.   So he was probably comparing them to Michelangelo.  So I always felt a small twinge of disloyalty when became fascinated by them.

I wanted to discover something new about each one.   I even joined the Boston Anthaneum which was a stuffy old private library and gathering spot for old farts about the age I am now.  I really wish I had some candids of the wizened pundits glaring over their reading glasses when the hippie with the camera walked through.   But there were some interesting tidbits in old public records. 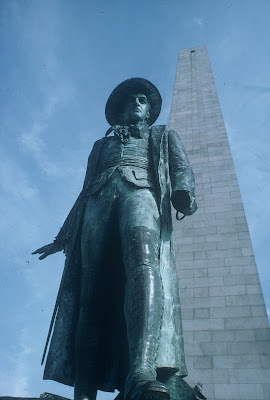 If I’m not mistaken, this was the guy who said, “Don’t shoot until you see the whites of their eyes.” Thousands of tourists see this statue every year... 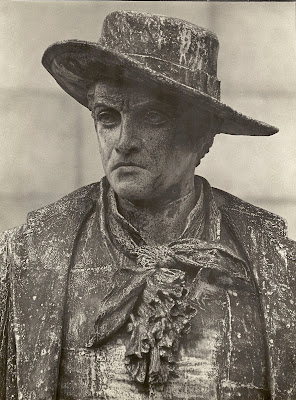 ...but I’ll be that none of them know that this is actually a statue of Andrew Dexter.

BAGMAN: "The heck with Dexter!  I don't even know who Prescott was...and don't really give a flip!"

Well, it is nice to know my old friends have let me back in the workshop and are talking to me.  But anyhow, to continue, William Story...

The sculptor who made the statue!  Let me finish for Pete's sake!

BAGMAN: "Who the heck is Pete?"

Enough!  William Story may not have been Michelangeo in my grandfather's eyes but he was thorough.  Since there were no paintings or images in existence of the American patriot, William Prescott, William Story looked around and found Andrew Dexter who was Prescott's great-grandson and used him as a model so there would, at least, be a family resemblance.

This was just a fun discovery. These massive cast bronze doors has just about been forgotten – tourists never saw them. They had been commissioned by the Salada Tea Company when its headquarters were in the building which, by 1970 had been abandoned by the company and building sold several times. 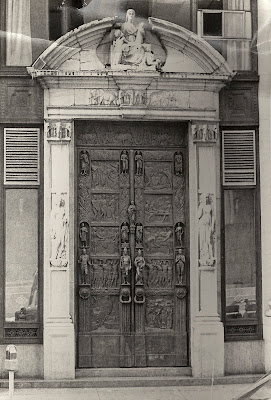 Skyscrapers had been built around that building since the doors had been put there and the sun only touched them for 30 minutes in the morning. I remember setting up my tripod and waiting for the right time. What was really fun was that people would be walking by me, notice the tripod, look over to see what I was shooting and their mouths would drop. I still remember one guy with a briefcase who exclaimed, “My God! Where did that come from!? I walk to work this way every day and never noticed it!” 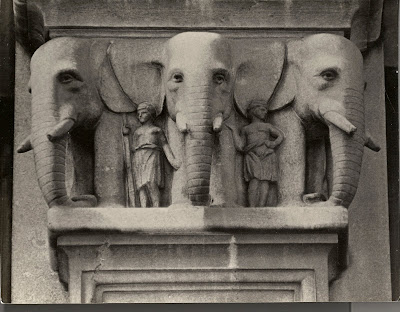 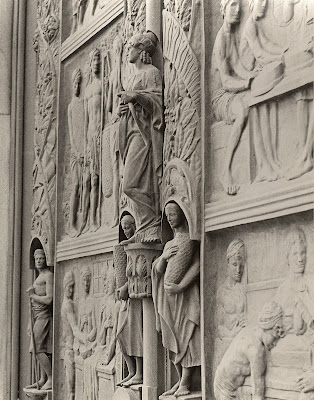 This was a fun discovery of something forgotten in plain sight.  It led to an article in the Boston Sunday Globe magazine which paid me $200, if I remember correctly, which constituted my total earnings as a freelance writer for the year.  Not enough to quit my day job.
DETAILS, DETAILS, DETAILS
Almost always I shied away from the straight statue tourist documentary shots.  I always looked for details and often focused on the bas reliefs around the base of the actual statues.
There is a statue of Benjamin Franklin that is Boston's oldest full-scale bronze sculpture, dedicated in 1856.  The statue, itself, was done by Richard Greenough, but he was taking too long to finish it.  I guess government projects dragged on forever even back then!  So the town fathers hired Thomas Ball to do the bas relief pieces for the base of the statue. 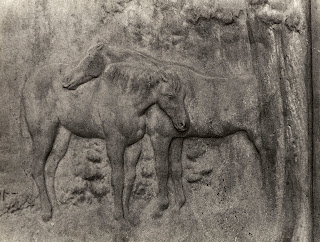 I kind of liked this one which was Ball's creative approach -- horses standing in the rainstorm when Benjamin Franklin was out discovering electricity.
BAGMAN: "Shocking!"
Speaking of Thomas Ball...
BAGMAN: "Please don't tell another story!!  Just show some pictures and go back to bed." 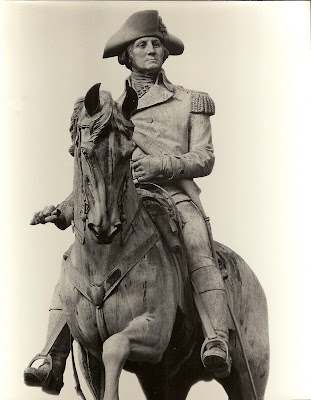 Speaking of Thomas Ball, I know I posted this one yesterday, but I came across some notes that I had forgotten.  This was Ball's first attempt at an equestrian statue.  Franklin's flat horses don't really count.  In fact, when Ball started this in 1958 he had never done a full size statue of any kind.  He did it in plaster instead of clay because he was working in an old unheated barn.  It took him three yeaers and by the time it was ready for casting there was no bronze available because it was all being used to make cannons for the Civil War.   It was also strange because Thomas Ball considered sculpting to be his day job and was really more proud of his opera singing.   Go figure.
Speaking of the Civil War... 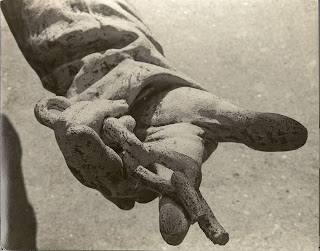 Detail from statue of Lincoln - holding broken chains of slavery
Speaking of the cost of war... 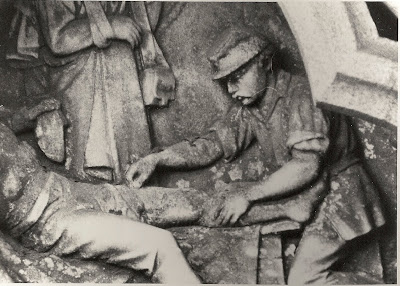 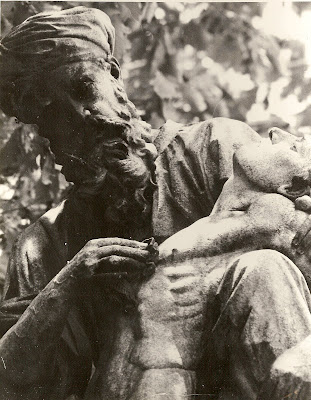 A good thing to memorialize when you think of the alternatives. 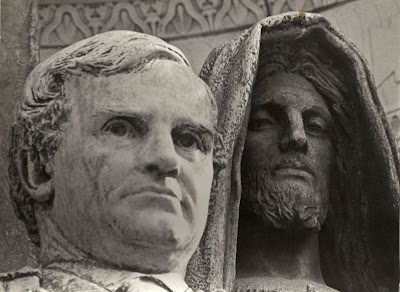 William Jennings Bryant
Answering God's calling is one thing...
Having him follow you around looking over your shoulder is another! 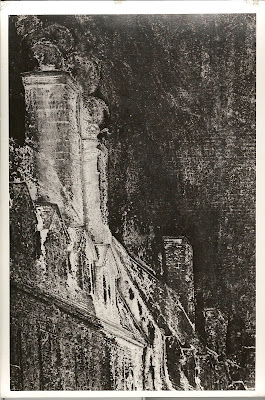 I think this was a detail from the Boston Massacre Monument
LOCATION AND PERSPECTIVE
Sometimes there weren't really interesting stories.
BAGMAN: "No kidding. Sometimes?   Zzzzzzz."
So I just tried to find some new angle or setting. 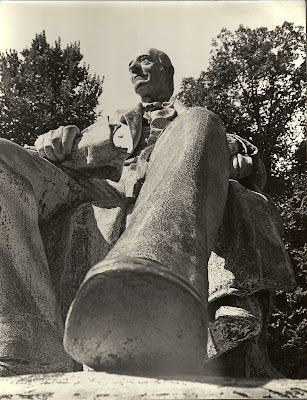 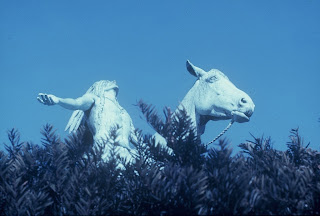 This was one of the few I took in color...and not very good color either. 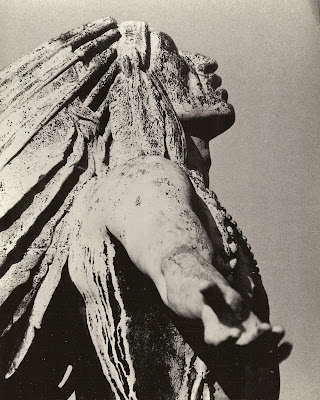 "Honoring the Great Spirit"
In front of the Boston Museum of Fine Art
And now, for the next thirty seven public monuments I'll give detailed minutes from the city council meetings that commissioned them...
BUTLER quietly leans over and pulls the plug on my computer.
Posted by Bagman and Butler at 1:22 AM