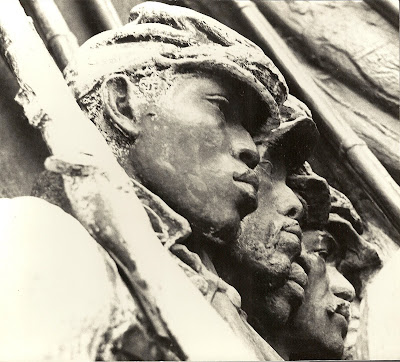 Oh my goodness! Bagman and Butler have locked me out of the workshop because I stopped blogging regularly and now I find out the theme of Friday’s Shoot-out is Public Artwork!!!!   Barry!  You sure got my mind working!

Boy, did that throw me back to the glory days of nostalgia-land!

I’ve always loved shooting statues. Mostly because they hold still for long periods of time and also because they never get angry and chase you down and stomp on your camera.

I have several I want to post on Friday – assuming I can convince Bagman and Butler to give me access to my computer. But I may also have to do a supplemental black and white post on Thursday.

In the early 70’s, right after college, when I was living in Boston, I contracted a major obsession with statues. I spent a year and a half (at least those hours when I was not working or drinking) researching and shooting Boston statues for a book I wanted to publish called, “Dialogues in Stone.” The idea was not just the tourist guide documentary shots – but to find something interesting or unique about each statue. Why they put it there? Who the sculptor was? Any interesting side-bars?

So I rummaged around the shed and pulled out an old cardboard box full of yellowed note paper and poorly stored 8x10’s, some of them stuck together. The sweet smell of mold and memories. 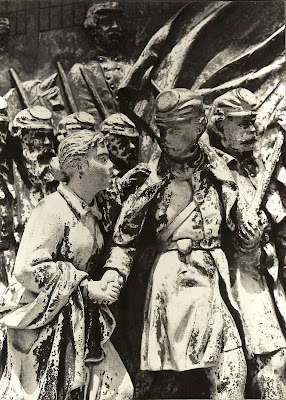 Memories of riding my bicycle with film camera in a backpack through back alleys of Boston trying to discover forgotten statuary. Getting kicked off the State House lawn at midnight when I was trying to take night shots. Sweating in a makeshift darkroom in my one-bedroom apartment with bottles of developer, stop bath, fixer, and a gallon of cheap red wine – which explains some of the focus problems!

I usually shot details instead of the whole sculpture.  In fact, I don't have a clue what some of the actual statues looked like when I see the shots coming out of the old box. 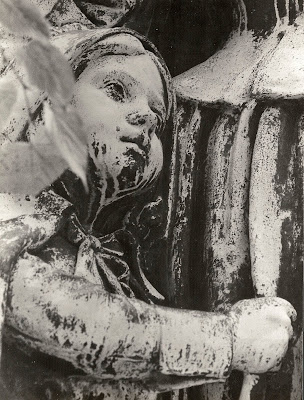 The book never got published although one publisher wanted me to expand it to include all of New England. But there was no advance money and I was having trouble paying rent already. And I did discover a couple of neat little facts that turned into newspaper articles at 2 cents a word which also didn’t pay the rent. But maybe I can share them with in Thursday version of Friday Shootout.
Posted by Bagman and Butler at 6:37 PM