Today I walk into the studio right behind Butler who was a little late because he was pressing his socks.

BAGMAN (looking very confused): "What are you guys doing here?"

BUTLER: (looking suddenly confused): What do you mean what are we doing here?"

BAGMAN: "I didn't think you guys had the stomach for this weeks theme. Ain't it too gross for you?"

BAGMAN: "The Rule of Turds. I can't believe someone came up with such a gross theme!"

"Wait a minute," I reply, jumping into the conversation. "It's the Rule of Thirds"...NOT turds!"

BUTLER: "It's simple. You divide the picture surface by two horizontal lines and two vertical lines forming a grid of six sections."

BAGMAN: "So why isn't it called the Rule of Sixths?"

BUTLER (ignoring him): "Pictures look better if the primary subject areas are oriented on the four places where the six lines converge."

BAGMAN: "So why isn't i called the Rule of Fourths?"

Butler looks at me. I look at Butler. Neither of us has an answer for this. Bagman starts dancing around, doing a little shadow boxing and grinning.

BAGMAN: "And you guys think you are so smart."

"You know," I say to Butler, changing the subject, "My grandfather, who was an artist, used to tell me about the 'Golden Mean'
BUTLER (relieved to escape Bagmand's dilemma and recovering his holier-than-thou posture): "That is a different aesthetic ratio that dates back to Pythagoras and Euclid in which two quantities are in the golden mean or golden ratio if the ratio of the sum of the quantities to the larger quantity is equal to the ratio of the larger quantity to the smaller one."

We all stare at each other for a long time trying to figure out how we are going to make a post from this mathematical morass.

Finally, I break the silence. "You know, when I use the cropping tool in Photoshop, it shows a grid. Maybe that's helpful. And there is also one in the viewfinder of the Nikon."

BUTLER: "So you've been doing this for a long time."

BAGMAN: "You guys figure it out. I'm going to the outhouse to practice my stomach's rule of turds."

So Butler and I try to figure out what to do. Finally we decide to find a couple of average photographs in the archive and see if we can improve them by cropping them according to the Rule of Thirds, Fourths, or Sixths. 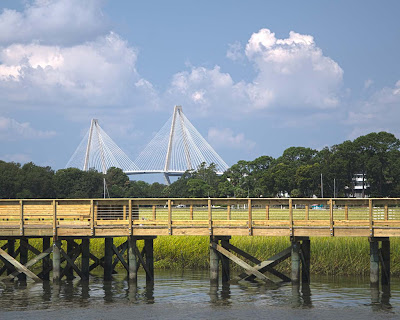 I kind of liked this shot already and it seemed to be kind of thirdish...but I fiddled with it anyway and came up with the shot below, where the center between the two spans is near an intersection point and the walkway runs along the lower horizontal. 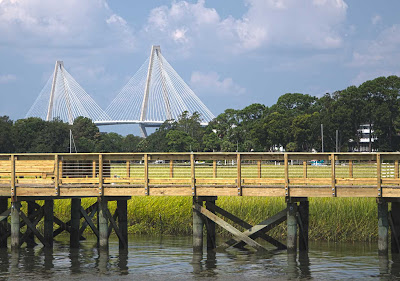 I think I like the second one a bit better as a composition but I was sorry that it cut out the dramatic top of the cloud in the upper right. But when I included the cloud, everything else was off. Maybe I should have framed it better in the camera when I first shot it. Photoshop can't fix everything. I suppose that if I was really ambitious, I could use the clone stamp and move the cloud down but I was running out of time.

Then I pulled out another - 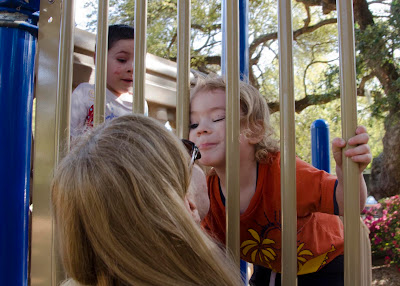 This was in my file of "Snapshots." I usually differentiate between family snapshots and photographs because there are lots of pictures I want to keep for memory value that I don't think are particularly good photos. But I thought I'd see how this might be cropped to be more Thirdish. 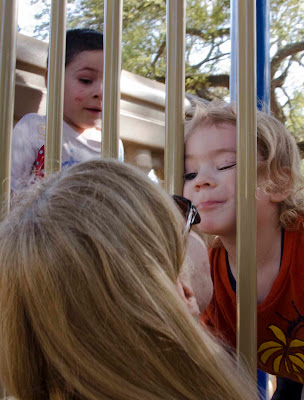 It is still not a picture that will ever hang in a gallery but I think that Thirding it up a bit did improve it somewhat. It also brought more attention to Conner in the background and made me wonder what he was thinking.

Anyhow, that's about it for today. I can't wait to see how other people handled this topic. It was a good learning experience for me.

Posted by Bagman and Butler at 3:00 PM