Having just dropped the kids off after several uninterrupted days of rolling around on the floor, getting jumped on, hugging, building with legos and spending zero time on the computer, I dash into the B&B Studio for the Friday Shootout Blog.  And Friday is already half over.

"So what have you guys come up with?" I ask Butler and Bagman who are lounging around looking fairly bored.

BAGMAN: "Diddly Squat."
BUTLER: "He means that we don't really have anything."

"I know what 'diddly squat' means," I reply.  "But surely out of thousands of photographs, we must have a couple of rainy pictures."

BUTLER:  "In Mark's defense, he is appropriately careful not to get his camera wet."

BAGMAN (rolling his eyes): "Or let sand or dirt get in it, or let it get too hot or too cold.  He treats it like a baby!"

"Except I put the baby in the bathtub regularly and she loves getting wet," I protest.  "And we did find this one..." 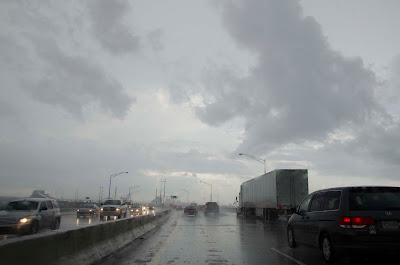 BAGMAN: "Our hero!  Fearless photographer.  Shooting from inside a car."
"The camera is a delicate thing!"  I argue.
BAGMAN:  "Barclay took his Nikon all over Africa in all kinds of weather and mud and hippo filled rivers and..."
"And it came back filled with sand and mud and dents and scratches," I protest.
BUTLER:  "And he got some incredible pictures while you were mostly shooting pieces of furniture and shadows on the livingroom wall..."
BAGMAN:  "Maybe you should just frame the camera itself and hang it on the wall."
I decide that maybe the boys have a point and maybe I need to get out more.  But first I try to squeeze in one more picture. 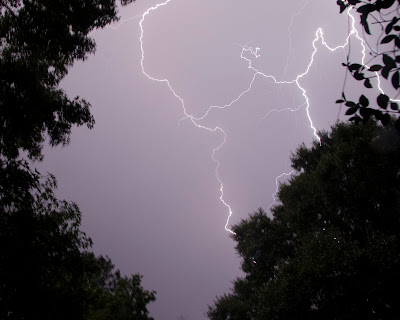 BUTLER: "Not too bad, but you realize that lightening is not actually rain."
BAGMAN:  "Besides you took it from safely inside your back porch."
"But I had the door open," I whine.
BAGMAN: "National Geographic would be proud."