FMTSO - How I Celebrate the Holidays


I was going to avoid this topic because...

BAGMAN (Rudely interrupting me): "Because you're a weenie and you always..."

BUTLER (Politely interrupting Bagman): "Let him finish his first sentence, at least.  He is probably going to make his usual holiday disclaimer about being a grinch.  I know he says it every year but it makes him feel good so give him a break."

Now that my partners have stolen my thunder, I don't know where to start.

Anyhow, I was going to avoid it because I couldn't really identify what special ways I celebrate the holidays.  It varies from year to year.

And I don't have any really good photographs.  I'm expected to take a lot of pictures and every year I file away tons of pictures of people of all ages tearing paper off of boxes.  And holding up the present and smiling appropriately no matter what it was.  It seems fun at the time but with few exceptions... 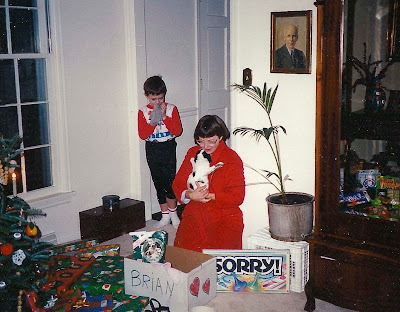 ...like the year Brian got Sally...
...the other 56,748 snapshots have no use except as a cure for insomnia.
And, Butler is right, I was also going to avoid the post because the false impression that I like to give that I'm a grinch.   But the Universe (or as I like to call it, 'God's sense of humor) seems to have turned the tables on me and given me an annual tradition.  And not one that I'm happy about.
I CELEBRATE THE HOLIDAYS BY GOING TO THE EMERGENCY ROOM.
In 2010, I fell off the stepladder while decorating the Christmas tree and broke my arm.
In 2011, I was suddenly attacked by some kind of incredible rash that covered my hands and feet with hundreds of agonizingly itchy welts.
I figured it was just coincidence.  But this year, I was home alone, performing the annual Christmas ritual of hiding presents from curious grandchildren.  In our new house there is a locked entrance to the attic crawl space.  Behind the door is a space that is clear of blown insulation where I've been storing Christmas stuff as well as everything else that I don't have a place for and don't know what to do with but can't throw away. 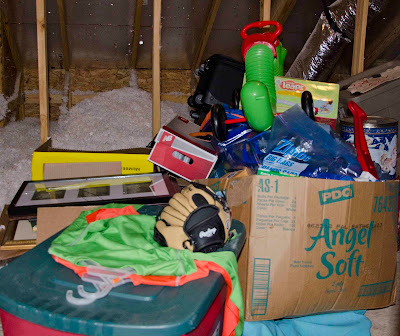 Note how neatly I store things
Also note baseball glove
Two gloves actually, smaller one for Noah tucked behind larger one for Conner.  I point this out because as I put these down, one of the baseballs slipped out and fell off to the right.  So I reached down to get it, stepping to my left so I could reach it and... 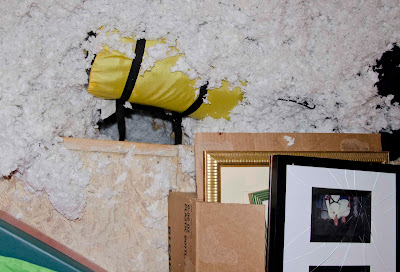 Concealed beneath the blown insulation was the edge of the supportive walk area
Note there is now a hole there just under the yellow thing
which I think is a sleeping bag that somehow got flung into the insulation
by my flailing arms as my foot went through the floor.
LESSON #1:  2 inch plasterboard will not hold 245 pounds of clumsy male flesh. 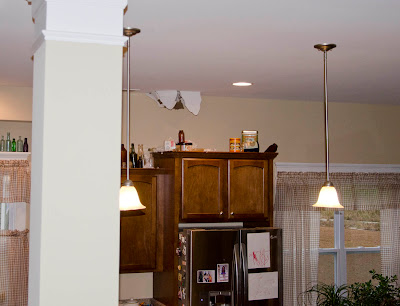 LESSON #2A:  If you are going to fall through a floor/ceiling, it is preferable to land on top of high cabinets rather than going all the way to the floor even if it is where we desplay Karen's collection of old bottles.
LESSON #2B:  If you are going to land on Karen's bottle collection, it is preferable to be wearing shoes (which, thankfully, I was). 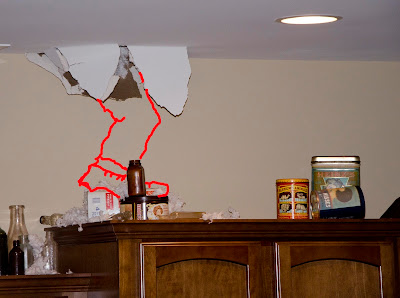 Note that this is not my real leg
LESSON #3  Even with ceilings, the exit wound is larger than the entrance wound.
My first thought, of course, was that Karen was going to kill me!  That ceiling is less than three months old!  I'm in so much hot water!!
Then, with a rush of gratitude, I noticed the soft, warm feeling of blood dribbling down my arm.  Since it was my leg that went through, I couldn't understand what my arm had been doing but there were several superficial scratches on the arm and one really good gash in my left hand.  With a sign of relief, I immediately knew the gash would need stitches.
I was relieved because Karen loves my hand more than she loves the ceiling and the hot water I would be considerably cooler.
So I got to take my third annual Holiday outing to the Emergency Room.  It wasn't that bad and I was able to use a towel to keep from bleeding on the new floors or in my car.  I drove with my right hand while holding the towel-wrapped left one up to reduce the bleeding.  With my hand raised near the window, people I passed all thought I was waving to them.  They smiled and waved.
Postcript:
Only 9 stitches and I'm as good as new.  A contractor friend has repaired the ceiling and we're back to normal.
But I can't wait to see what happens next year.