Surprised by a poem

I woke up this morning from a dream which I remember but dare not repeat in detail.   And lying in bed while my consciousness made the laborious transition to the day, a poem formed...almost in self-defense.  So I guess I need to post it.   Goodness!  Two posts in two days.

Security Guard at the MOMA

Illustrating the very essence of endurance,
and never leaning in a poorly pressed and wooly blue
of maturity, wisdom, and the awesome authority of

(practicing the Zen of forgetfulness)


But yes, I see you over there,
beside of the Pollock, surreptitiously groping.
And I wrestle with cinematic rush,
of putting pedal to metal,
accelerating toward the heart-shaped plush,
waiting for the glowing engine to blow


while throwing brains out the window
like hamburger wrappers flapping in the wind. 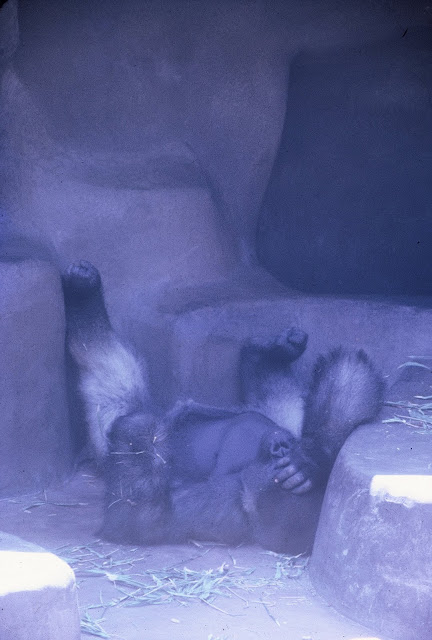 Actually, this morning, I still do.
Posted by Bagman and Butler at 8:04 AM 20 comments:

The art of seduction as practiced by small minds 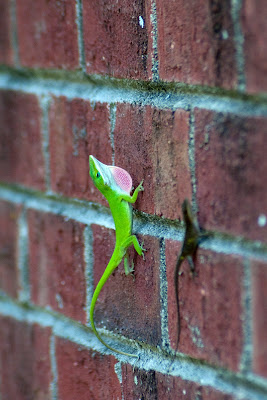 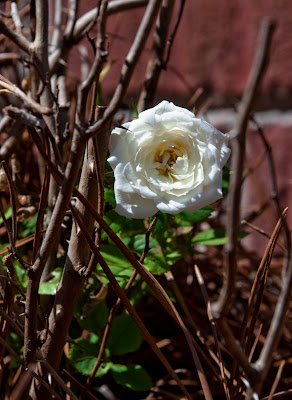 And he gave me a flower too! 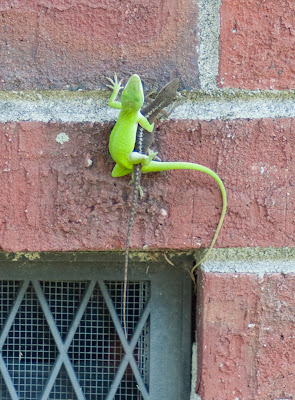 Much as I tried, I couldn't be discourteous enough to not post when the topic was originally chosen by me.  When Ginger mentioned it earlier in the week, I truly did not remember suggesting it.  She probably thought I'd lost my mind.  She might be right.
Of course, "things I like to touch" came from Bagman.  And I'm pretty sure what he had in mind and it probably would have caused him to be banned from Blogspot forever.  Fortunately, it's been so long that he's given up and I can't even remember suggesting it.  And, unfortunately, it was a huge challenge to come up with something.

The challenge was finding the willingness to be brutally honest with myself and show my bloggy friends the hard truth... 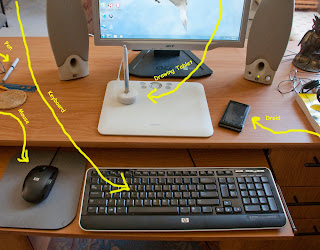 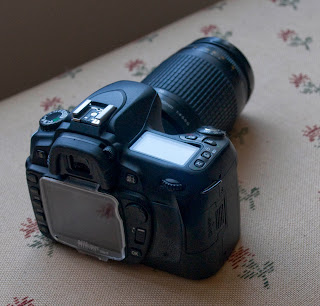 BAGMAN: "Have you turned into a robot?!!  Have you sold your soul to Bill Gates!!"
BUTLER:  "It could be worse, you know.  Bill Gates is a bit of a philanthropist.  He given so much money away that he's no longer the richest man in the world."
BAGMAN:  "That's not the point!  Mark 's gone all mental on us.  What happened to smelling the roses then rolling in them?  He's addicted to thinking!" 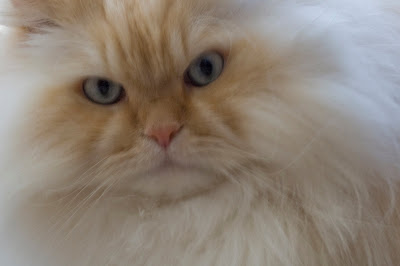 Well, I do like touching the soft fur of Diamond Bill...
BAGMAN:  "A little better..." 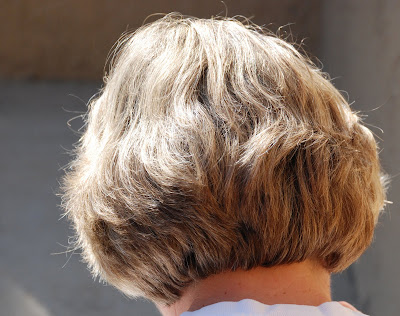 And Karen's hair...it's a bit longer now.
BAGMAN:  "Better..."
And, I like touching myself.
BAGMAN:  "ALL RIGHT!  WE'RE COOKING NOW!!!"
I'm sorry to disappoint Bagman but this is embarassing enough.  I've got a couple of things I discovered as a little kid -- kind of touch illusions.   For instance: 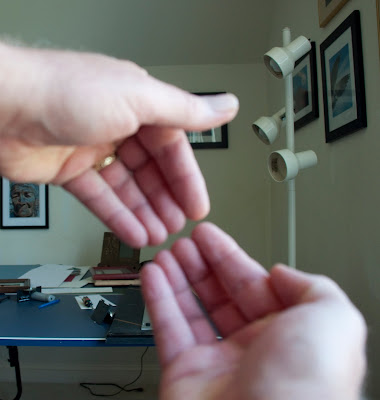 If you get your fingers aligned perfectly straight across on both hands and tap them together, it almost feels like they are not separate fingers, or like there is a rular between them.
BAGMAN:  "It just gets worse and worse!!  Senility must have set in!" 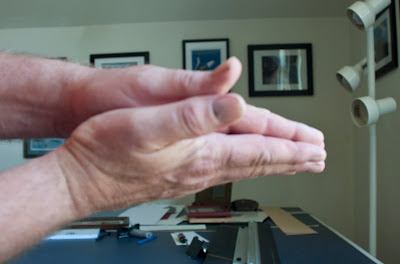 And if you put your palms perfectly flat against each other and rub them back and forth, it also feels kind of weird.
BAGMAN:  "Because it IS kind of weird!"

And this is more of an optical illusion than a touch one, but if you hold your fingers like this in front of your eyes and let your eyes focus on the horizon -- the reverse of crossing them -- it will look like a little hot dog appears between the gap.
There is the crashing sound of a door .   "Where'd Bagman go?"
BUTLER: "What do you think?  He gave up on you.  Although I thought the last one was a bit interesting."
Oh yes, doors. 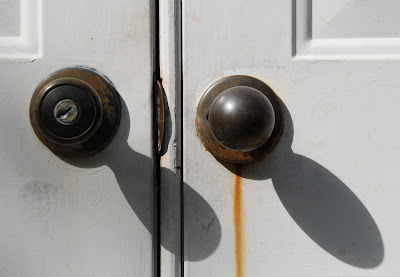 I like touching door knobs because they open doors
and doors always lead from one place
to another. 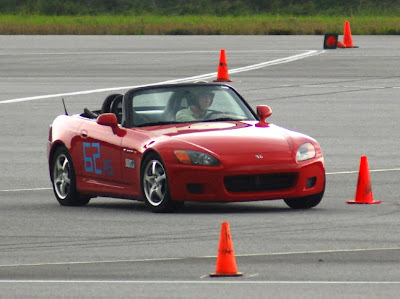 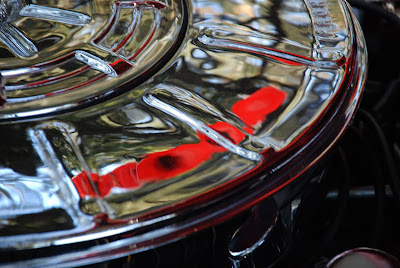 And the heat of a car engine 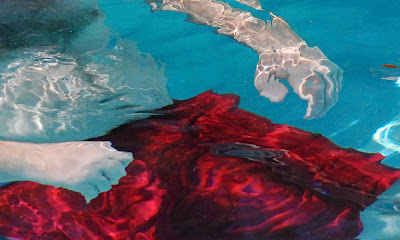 I feel like kind of like Punxsutawny Phil, climbing out of a hole and blinking to see if I have a shadow.

The theme for tomorrow's Friday Hometown Shootout is "Things I like to touch."   I've been really out of touch lately, rolled up into a tight little defensive ball like a punxsutawny hedgehog.

BUTLER: "Punxsutawny Phil isn't a hedgehog.  He's a groundhog."
I almost jump at the sound of his voice.  "Butler?  Is that you?  Where have you been?"

BUTLER: "Just sitting here, keeping the coffee warm and watching you curled like a fetus in your little feeling sorry for yourself world."

Like I need Butler's little critical remarks.  I go back to pondering tomorrow's shootout.  Like I have time to do anything about it.  It's already Thursday.  Like people on the other side of the world where it is Thursday night are already posting.   And why am I starting every sentence with the world "like"?

Things I like to touch?  What kind of a stupid theme is that?   Who on earth suggested that dumb, nonphotogenic topic?

BAGMAN:  "Getting ready to kick you in the butt if you start another sentence with "like!"

I groan.  I have a headache.  Did Bagman, Butler, and I really suggest that topic?  I half remember Ginger writing me earlier in the week to ask if I would say something about it on the Shootout Page. I remember politely refusing because I was too busy or something.  Then, for the last three days, wrestling with myself over whether I could really avoid participating in a shootout topic that I had suggested.

I stretch my mind to get in touch with who I was when Bagman suggested that topic.  Like I must have been feeling particularly bawdy.

WHAM!   Bagman's foot to my posterior sends me halfway across the room.

I turn to glare at him but Butler stands between us and thrusts a camera into my hands.  Okay, okay.  I get  it.  Well it won't be much. And it won't be bawdy.  And I really just want to go back to sleep.  I look at the camera and then up to Butler standing over me and say, "How do you work this thing anyhow?"

BUTLER:  "You're really getting to be a pain in the ass these days."

Is it time for my close-up, Mr. DeMille?

by Conner
So, here I am riding on the Daddy-Whirl 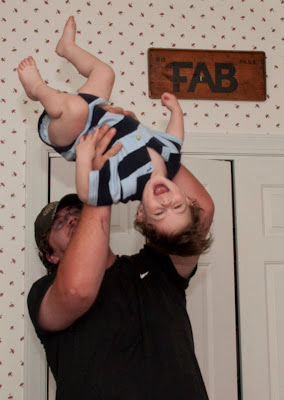 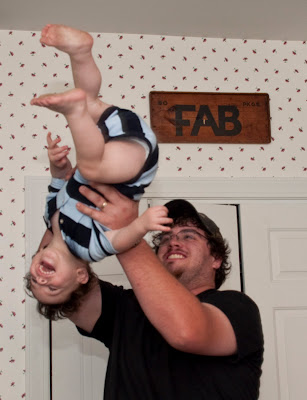 Which is fun but tiring...at least for him.
Because he needs to sit down...but  HEY! 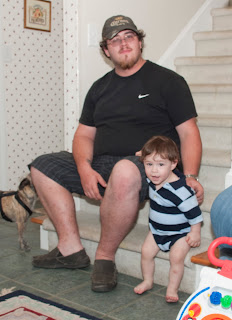 It's the Camera Guy again!!! 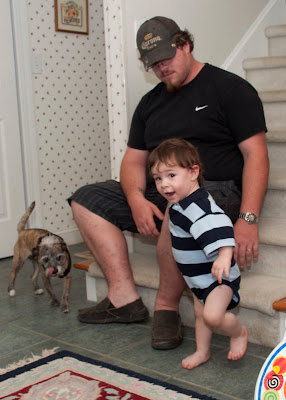 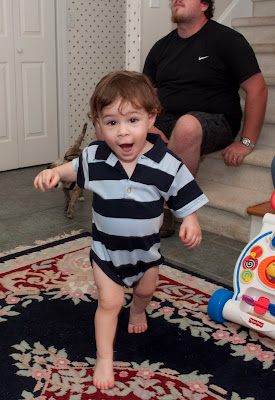 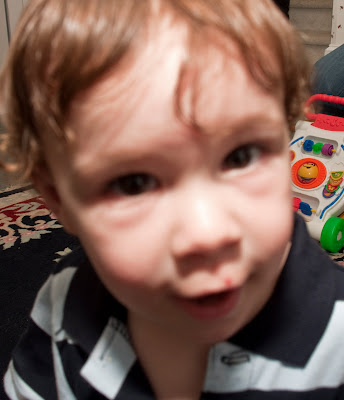 Make sure you get my best side.
How close will that thing focus anyhow?
Posted by Bagman and Butler at 7:27 AM 8 comments: