A longer than usual blog during which Mark finally learns his true vocational calling.

But when I walk into the studio, I'm shocked to find that Bagman and Butler have already started posting! 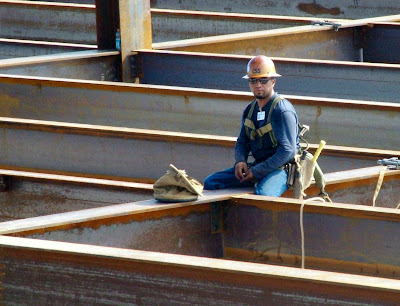 "Hey!  What's the big idea!  How could you start without me?!!"
BUTLER: "If it isn't Grumpy, himself."
BAGMAN:  "I think he saw himself as Dopey."
"At least Snow White kissed Dopey," I explain.  "But don't change the subject.  Why are you posting pictures without consulting me?" 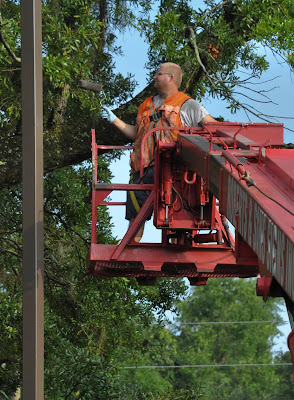 BUTLER:  "No offense, Mark, but you are retired now.  What do you know about work?"
BAGMAN:  "He never knew nothing about work when he was working!"
"I resent that!" I bluster resentfully.  "I had an important job directing an alcohol and drug treatment agency!" 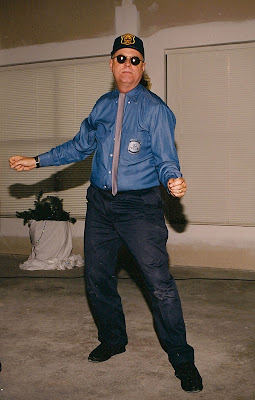 BUTLER: "Yes. It is obvious that you took your job very seriously."
"That's not fair!  That picture was taken at an office Christmas Party," I whine, which is what I do when blustering doesn't work.  "I was working hard at building employee morale!   I worked long, hard hours.  Look at this!"   I manage to post a better picture of myself. 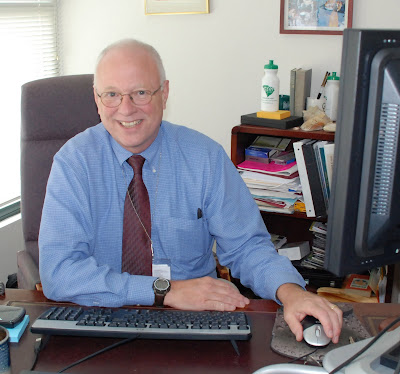 BAGMAN: "You call that work!?   A cushy air conditioned office?  It was 100 degrees yesterday and real workers were putting a new roof on your neighbor's house!" 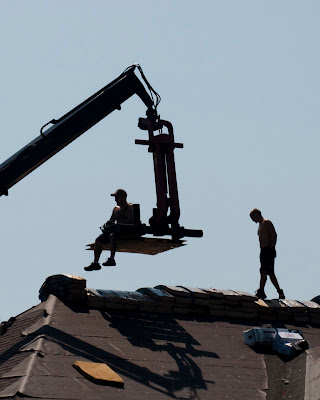 "But I had a position of importance.  I was even in charge of the County's Emeregency Operations Center during hurricanes,"  I rationalize, which is what I do when trying to recover from whining. 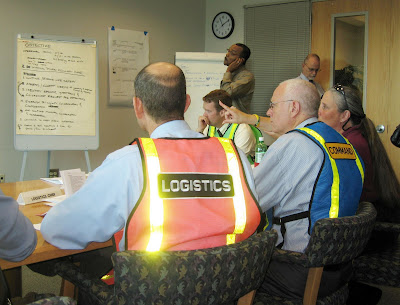 BUTLER:  "You seem to have a rather inflated perception of your self-importance.  Do you really see your job as more important than people who struggle for a living?" 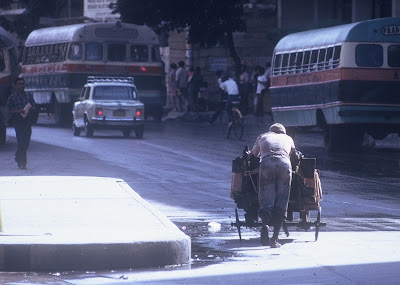 "Well some people thought I was important," I say, reduced to grasping for straws.  "Look!" BUTLER: "Now you are just grasping for straws.  That was just a photo opportunity and besides, the award was being given to the woman.  She's the one who did the work.  They just invited you to be in the picture because they didn't want to offend you."
So I am now reduced to silence.  But I'm not quite defeated yet.  After a few minutes of trying to remember if I ever really did anything during my 35 year career, I come up with an idea!
"Okay," I concede (partially).  "Maybe management doesn't qualify as work.  But I was also very creative.  Look at the picture below!  I used to make very creative Power Point presentations." 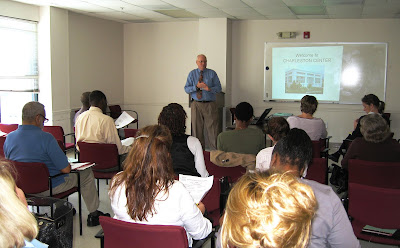 BAGMAN:  "Creative!!! You call that creative?!!   The audience is half-asleep!  Besides, this is what real creative work looks like!"
Suddenly Bagman and Butler are posting pictures faster than I can keep up with them. 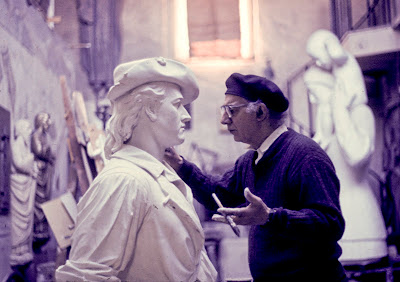 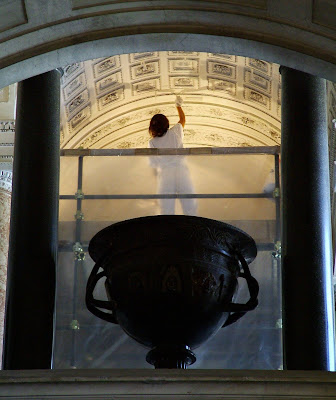 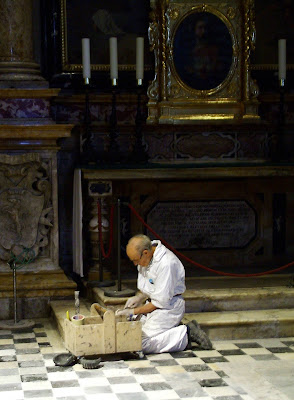 BUTLER:  "Look, Mark. We regret having to burst your bubble.  But even if we agreed that you did a little work during your career, the fact is that you are now retired.  You no longer work."
Angrily, I explode with self-righteousness which is the last resort when whining, blustering, rationalization, etc., have failed.  "My two grandchildren live with me!  I dare you to tell the single mothers of the world that being a stay-at-home mom isn't work!!"
BUTLER:  "You're not a single mom!!  Three other adults live with you!  The kids go to day-care, the adults go to work and your main duty is to walk the dogs while they are gone!!"
"But...but...but...well, I taught Conner to fish!" 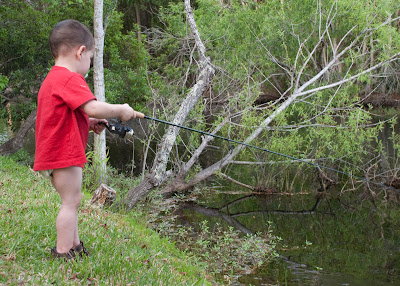 BAGMAN:  "You're not even in that picture."
BUTLER:  "Besides, it was Barclay who taught Conner to fish.  You just go out these days and get the line all tangled up."
BAGMAN: "Besides that..."
BUTLER: "I already said 'besides.'  You can't say 'besides' right after someone else has said it."
BAGMAN: "Go eat worms!  This is what real fishing work looks like anyway." 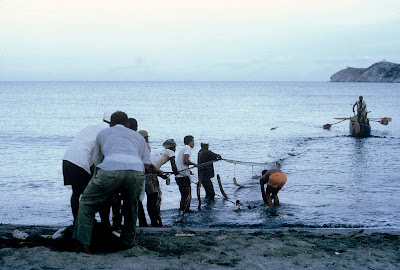 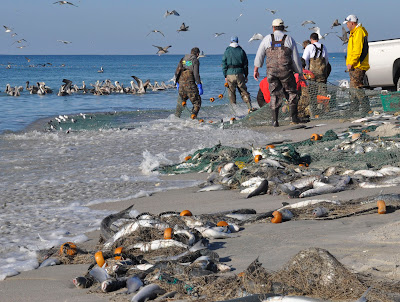 I'm beginning to feel useless.  "I don't have a picture to prove it, but at least I sometimes cook."
BUTLER:  "I think it's called the Microwave. This is what cooking looks like in the world of work." 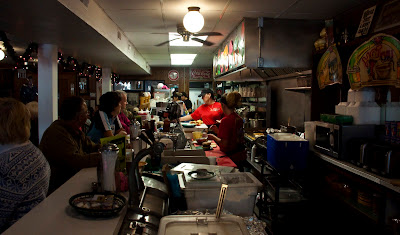 I'm totally defeated and have no further recourse than to throw myself at the mercy of Bagman and Butler.  "Please, guys.  Have mercy.  Are there no photographs that show a purpose to my life?"
BUTLER (smiling compassionately): "Well, I've noticed one area where you succeed in being useful around the house. 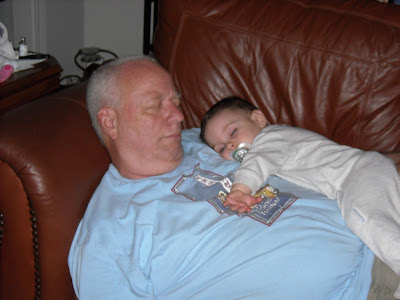 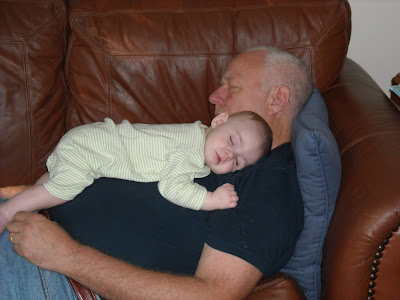 AT LAST!!!
I HAVE FINALLY FOUND MY TRUE CALLING!
BAGMAN:  "I think Sleepy is the dwarf that Mark most resembles."
Posted by Bagman and Butler at 1:04 PM