Friday's What is It Revealed

I’m sorry to have been so long in revealing my “what is it” submission to the Friday Shootout but it has been extremely busy both at home and at work.

BUTLER: “Bagman’s right. You start almost every blog with the same apology.”

Okay, I’ll just reveal the “What is it” shot.  Most of you were close.  Jack got it on the nose.  I was also going to illustrate this blog with a photo of one of those frames when it is open. But the best shot I have is of the baskets in another setting -- 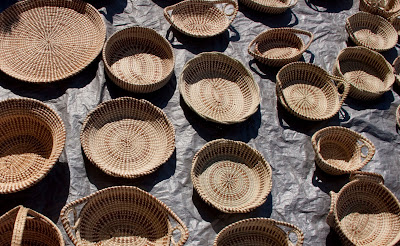 There is no photo value in this shot but I took it in order to possibly use the shapes and textures in some future Photoshop Manipulation.  I have a lot of quick shots like this.  But if you can imagine these basket and fancier ones hanging from every inch of the frames.  The frames, as Jack guessed, are the marketplaces for Sweetgrass Baskets along Route 17 in Mount Pleasant and other places on the Gullah-Geechee Corridor.

In my opinion, this is probably the most important and unique attraction of Mt. Pleasant where I actually live – just over the river from Charleston which is a more recognizable name. In fact, in 2006 Congress passed the “Gulluh/Geechee Cultural Heritage Corridor Act” providing the U.S. National Park Service with $10 million over ten years to preserve these historic sites.

BAGMAN: “Ten million dollars for these pieces of wood!!!”

Well, there are also heritage centers and events and communities where the Gulluh language is still spoken…but the basket weavers are the most obvious. There are about 300 of these stands running from North Carolina to Georgia, but the majority are in Mount Pleasant.

The Gulluh culture is an amazing, enduring, vital and surviving subgroup from the great American disgrace of slavery. Most history books talk about slavery and cotton but on the Carolina coast, the crop was rice. And most of the slaves were shipped over from distinct areas of Africa – primarily Senegal and Angola (the Mende, Kisi, Malinke, and Bantu).

You know, it is sad – I grew up in the North, hundreds of years after slavery, and marched in protests in the 60’s, but I still feel guilty. Which is probably why I have pictures of empty wooden structures and pictures of baskets themselves but none of the women weaving baskets. Or pictures of men on their bicycles riding up Route 17 with large bundles of sweetgrass they have picked.  I need to correct that sometime.

It is just my own embarrassment. The modern day Gulluh community is very open and inviting for people to learn about their culture. And it is a truly unique culture that has even maintained (although it is a struggle to keep the younger generations interested) its own language – a lyrical combination of Elizabethan English and African Languages with Caribbean tonality thrown in for good measure.

It’s a culture that is really unique in the world and it’s literally in my own back yard (the frame stands I shot were literally less than a mile from my house!). I really want to learn more about it. And one of these days I’m sure I will. When I have the time.

BAGMAN: “You’re not going to start complaining again about how busy you are.”

I started to answer him but the phone rang and I was off to something else.
Posted by Bagman and Butler at 4:56 PM