Blast from the past.

Once upon a time in a land far away...

BAGMAN:  "So you've given up on the political punditry???!!!

Yep...I got tired of taking myself so seriously and pretending to be a political science professor.  So, I was looking at old pictures and found this one that was taken sometime in the 1970's in Santa Marta, Colombia. 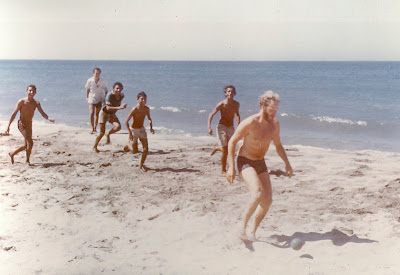 Looking back, I cringe to think of one of the many opportunties missed because of my then active alcoholism.  I had quit my job, bought camera equiptment and flown to Colombia with the intent of hiking through Colombia, Equador, and Peru to end up at Machu Pichu, writing, taking photographs and becoming a National Geographic photographer.  Of course, National Geographic never had a clue as to my intentions although I did go to the National Geographic museum in Washington once.
But my first discovery, unfortunately, was that in Colombia rum was dirt cheap.  So despite a few photographs, mostly I frittered away two months and all my savings drinking rum and fooling around.  Ah well.
I remember this picture.  I was so proud of myself that I had become a great soccer player, able to steal the ball for a breakaway despite the best efforts of 5 other players!  40 years later, looking objectively for the first time at this picture, I can understand why. 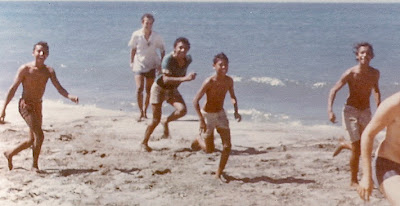 I might have been intent on my run for the goal but everyone else was just smiling, posing, and running to get into the picture.
Another fantasy refuted by photographic evidence.
BAGMAN:  "So now are you going back to a serious discussion of politics?"
Nope.  Boys just want to have fun.
Posted by Bagman and Butler at 7:09 AM