So we're having a quiet Thanksgiving.  The kids and grandkids were doing it this year with Melody's family.  In the spirit of the Holidays, Karen surprisingly decided to invite Bagman and Butler to join us.  I think she felt the need to try and close the distance that has been growing between myself and my odd siblings.
Things were going quite well although Karen was sitting as far away from Bagman as possible and watching like a hawk to make sure he didn't scratch his initials on the polished wood of the formal table we only use a couple of times a year.  I didn't really know what to say and was sitting quietly staring at my plate and listening to Karen and Butler discuss the correct positioning of the silverware.  Bagman was drumming a beat on his plate with his knife and fork, punctuating his tintinnabulation with an occasional belch.
Then he brought up the subject of whether we were going to do a Friday Shootout and what the theme was going to be.


BUTLER:  "I was kind of hoping for an exhibition of cutlery.  But did you know that there are some beautiful formal gardens in Great Britain?"
"That's fascinating," said Karen, leaning closer to Butler (and further away from Bagman who was dipping seconds of mashed potatoes with his bare hand).

I looked up and smiled at Bagman because I hate lawn and garden tools also.  They make me sweat and give me sore muscles.  I said, "I had planned to skip the shootout completely."

But Karen looked at me, smiled, and said, "I think that is a very nice theme.  Why don't you go out and take pictures of them while I get dessert ready."

BAGMAN (Jumping up and spilling his ice tea over his mashed potatoes): "Rake!  You're a rake!  Hide the maidens, Mark's a rake!"


"Does everything have to have a double meaning?" I asked helplessly.
BUTLER: "Many garden implements have sexual connotations from the middle ages because of the natural association between planting and procreation.  For instance, "furrow" and, excuse my use of the word, "fuck" come from the same Latin root.  Ploughing, pitchfork, rake...you  know, Bagman, you might find a reading of Shakespeare very interesting."

BAGMAN: "Humpf.  I'll stick with the Internet, although Nabokov wasn't too bad.  Hey!  Do you know that sweet tea is pretty good on mashed potatoes!"

Karen actually reached over and patted Butler's hand, saying, "I never realized how much you knew about things."


This was getting to be way too much for me, so I  grabbed the camera and went to the shed.  I only took two quick snapshots in the shed because I really do have a distaste for garden tools.  Plus I didn't want to miss dessert. 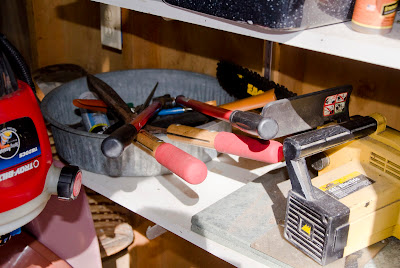 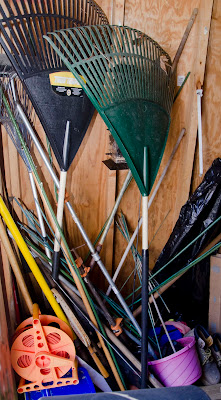 You can tell my attitude toward yard work by the orderly way I return tools to the shed.  The rakes are obvious and the green things are stakes for tomato plants, but I would have had to actually touch these implements to show what some of the handles are connected to - so you will just have to imagine the unseen shovels, hoes, and picks.
BAGMAN (Shouting from inside the house):  "Mark just said 'hoes'!!"
I shake my head, nervously, wondering what Karen must be thinking.  But then I hear her voice cheerfully calling out, "Don't forget to shoot the lawn mower!"
The riding lawn mower we bought a few years ago is the first piece of equipment that doesn't make me sweat and I have to admit that I am grateful not to have to push the old mower all around our lawn.  Then again, I never get to ride on it anyway. 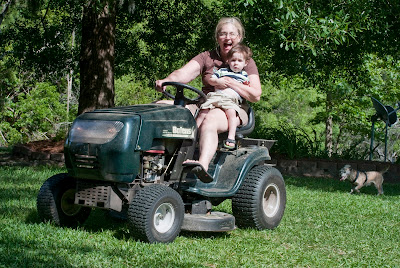 Okay, just give me the shovel so I can dig a big hole and get in it.  On second thought, I don't want to miss Thanksgiving dessert.
I walk back into the diningroom, dessert is being elegantly served by Butler who has given the biggest piece of pumpkin pie to Karen, asking if she would like a little ice cream with it.
Our dog, Daisy is feasting on the copious crumbs that Bagman has dropped on the floor beside his chair.  I figure I'll get the broom as soon as we are done.
Then with a grand flourish, Bagman knocks over another glass.  Trying to catch it, he tips his plate up and showers Daisy with beans, cranberry sauce, turkey, creamed corn, yams.  But he saves his pie.
BAGMAN:  "Hey!  Sweet tea goes good on pumpkin pie too!"
Looking at the mess under his chair, I give up on the broom.  I'll probably have to get the rake out of the shed.
Posted by Bagman and Butler at 4:36 PM