It could be the newest in the infinite selection of "Reality Shows."

Like Cops, the Bachelorette, Amazing Race, The Apprentice, Survivor, Wife Swap, America's Next Top Model, etc., etc., ad nauseum.   I'd call it "Moving with Baby" and bring together a new couple, a brand new baby, some complicating in-laws and have them all welcome the baby home and move on the same day!   Although I'm not sure what we'd do for next week's follow-up show.

If I had videotaped the weekend, I could certainly sell it -- 48 gripping hours of laughs intersperesed with some serious cuss words.  But considering the polite constraints of Blogspot, I can only give you the highlights.

The arrival of Kay from the hospital was something I was able to capture on film.  (The cuss word situations were not photographed since, much of time, unfortunately,  I was doing the cussing).
so here are the snapshots: 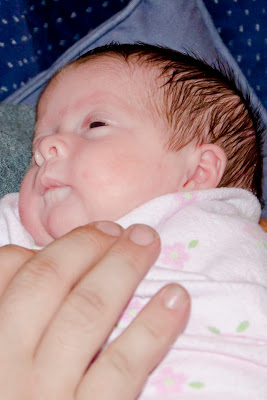 Kay wakes up briefly,
calmly surveys meyhem,
and goes back to sleep,
making me envious. 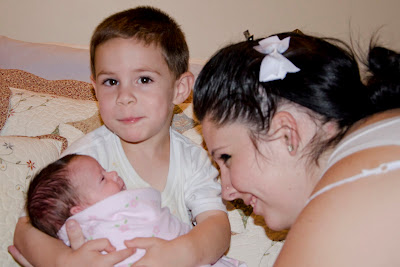 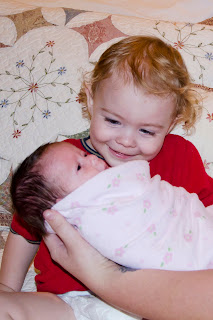 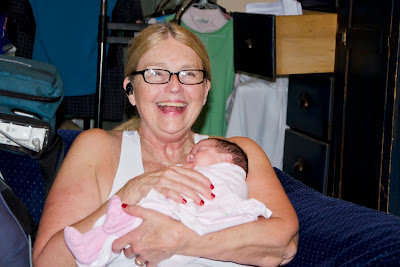 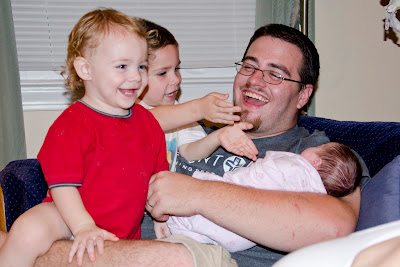 Brothers and Brian are overjoyed... 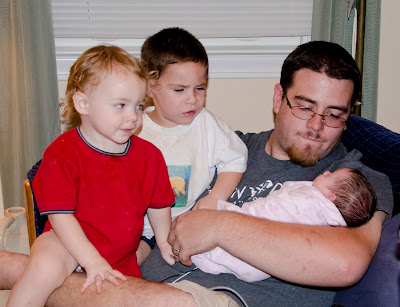 ...then thoughts of sleepless nights
and sharing toys adds a moment of contemplation
MOVING PAINS
Thirty miles, back and forth, back and forth, in our wonderful neighbor's borrowed pick-up truck.  Bottoms fall out of boxes while being carried down the stairs.  Don't scratch the paint.  The recliner MUST be able to fit out the door somehow!  After all we got in, didn't we?  Wind on the Interstate shreds the tarp -- hope it doesn't rain.  Buy a new tarp.
But jumping to the chase to conserve space, the last (almost) thirty mile trek was the climax.  With all the big stuff gone, the boxes and bags of food, clothes, toys, and unidentifiable junk are piled into the pick-up.  By now, Brian and I are brain-dead, body-dead and no longer care about neatness and organization.
And time has become crucial.  Night is falling and Melody, already in Goose Creek with Kay, calls to say she has take the baby to the pharmacy to get something the baby needs.
Sagging boxes and ripping bags are piled three and four high in the pick-up's bed.  Tied down with clothesline, lashed with straps, covered with the new tarp that is bigger than the truck.
Melody is calling Brian's cellphone and we realize that Brian has her wallet and she is stuck in Walmart somewhere with a cart full of stuff and no way to pay for it.  We become frantic...just stuffing anything anywhere.  The truck looks like the introductory scene of The Beverly Hillbillies.
(This is the beginning of some of the cussword stuff.)
I take off in the truck while Brian gets ready to drive his car to Walmart and meet Melody who is becoming increasingly and understandably desperate.
Two miles down the road, my cellphone rings and I get the news that, somehow, we have packed Brian's car keys in one of the two thousand boxes stuffed under the tarp.  (Serious ongoing cussword stuff begins here).
Back in the driveway, night falling with our spirits, armed with flashlights, sweating like pigs and swearing like sailors (to use an odd metaphor -- what is it about sailors that gave them this stereotype?) -- Brian and I untie a million knots, crawl under the tarp, pull out boxes which now collapse their contents pouring out everywhere.  Needle in a haystack?  Try looking for a set of car keys in two thousand boxes stuffed in a pick-up under a tarp while mother and newborn are wandering around a Walmart calling every few minutes to ask, "Have you found it yet?"
A coffee pot comes loose and shatters on the driveway.
The top come off an economy size box of Q-Tips spilling them everywhere.
Brian points out that I am bleeding.  I look at my arm and determine that I am not bleeding enough to threaten my life and, by now, the realization that I am not going to bleed to death is actually somewhat disappointing.
But, of course, we eventually find the keys, thirty minutes after we had given up all hope.  And by midnight, I've returned my neighbors truck, everyone is settled into their respective homes, and I am picking up the last Q-tip from the driveway when my cellphone rings.
"Is there a plastic bag in the garage?"
"There is,"  I say.  There were several small items that could fit in Karen's car that we were going to deliver.
Long pause.   Brian says, "Kay's medicine from the hospital is in the bag.  We need it tonight."
My body droops.  My head drops forward.  There are no cusswords left.   I just stare at the floor.
And notice two more Q-tips.
Posted by Bagman and Butler at 9:20 AM