I've been spending less time lately with Bagman and Butler so I was excited to share with them some of the stuff I've been playing with on Photoshop.


"You can't believe how exciting it is to shoot in .raw," I said not expecting the reaction my statement would get.
BAGMAN (exploding from his chair, dancing around and tearing his clothes off):  "Yes!  Finally!  Yes!  We're going to shoot in the raw!"
BUTLER (eyes wide with panic):  "I don't think that's what Mark meant."
It was too late.  Bagman was already stark naked and had grabbed his camera from the hook.  He always had a huge telephoto on it because he thought the long lens looked macho.  And he always loosened the straps so that the camera hung below his waist.
BUTLER: "That makes you look like an idiot even with clothes on."
BAGMAN:  "Rock musicians do it!  You've seen how they hold their guitars down there!"
I had to admit that I had always noticed that and wondered what was wrong with me.  When I hung my guitar at crotch level, I could never get my left hand far enough around the neck to play bar chords.   Maybe my arms were too short.
It didn't matter.  Bagman was already racing down the hall toward the front door and I was imagining the citations I was about to get from the local police.  Fortunately, with straps that long, his leaping caused the camera to swing out and back violently and he slumped down on the hall rug groaning.
BUTLER: "Thank goodness that's over.  So what were you going to say about raw?  Are we talking sushi here, I hope?"
They are both hopeless.   What I was really going to talk about was how my camera can take digital shots in JPEG or RAW format.  RAW format makes huge files that take in more information that just the picture and Photoshop can do amazing manipulations.  It can increase or decrease the exposure by 1, maybe 2 stops!  And other stuff I don't understand, like reducing luminescence, whatever that is.
Photoshop C5 also has a fancy function called "Automated High Dynamic Range" where you can combine several different exposures of the same shot and it combines them.  If was really competent at this, I would use a tripod and shoot several exposures of the same scene and then combine them manually.   But automated is so much quicker.
BUTLER:  "And lazier."
Anyhow, running out of time before Bagman recovers from the hall rug, I wanted to show a surprising example -- not the greatest shot but mostly to show what's possible.
The first shot, I took at night, two years ago.  I was shooting in raw even though I didn't know why.  I was playing with long exposures and the results were...well...they were learning experiences.  Here is the original shot, straight out of the camera. 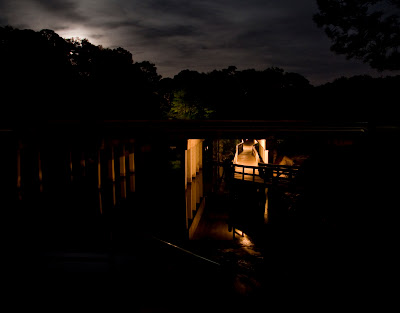 This morning, experimenting, I took the shot and made three copies.  Then I ran one copy in Photoshop and underexposed it even more (as if it needed it).  Then I took the other copy and increased the exposure as much as I could in Photoshop.   Then I combined the three of them in the automatic HDR function and cropped it some.   Not something I would frame but isn't it amazing that this much color could come out of the earlier picture? 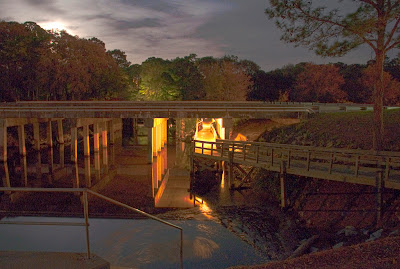 BUTLER:  "Can we go to the sushi place now?"
BAGMAN:  "Do I have to put my clothes back on?
Posted by Bagman and Butler at 5:37 AM