OMG! I'm going to have to pull the plug!!

I'm not sure I can do it!  But the carpet guys men on tomorrow!  (Or later today since this may not post until after midnight).

Did I tell you that we Karen have decided to move so we Karen can be closer to the grandchildren?  So we are suddenly in a non-stop frantic sweat to do everything to the current house that we should have done for ourselves years ago.

And the upstairs needs all new carpets because...well...

we can almost hide the signs of our dogs marking their territory despite the fact that they never paid rent so it wasn't really their territory.   But the grandchildren have been more creative.   Melted lollypops, chocolate ice cream (weren't they suppose to eat that at the table?), and something that looks like they used a welding torch on a green plastic dinosaur and dripped it in the corner.

So tomorow or later today, the carpet men come.

They will do the heavy lifting, they say, to clear rooms of furniture, but we need to get all the small stuf off the shelves.   Not a problem in the rooms where Brian, Melody, Conner, and Noah were living.  But my studio is a disaster.   Boxes of slides, old photos, tools, wires, printer ink cartridges, a thousand frames from when I once had a bigger studio to put them in...

...and, because it was handy, it has also become the storage space for everything else in the house that didn't have a space.  Kids clothes, kids toys hidden for next Christmas, stuff I don't even recoqnize.  I suspect that the Town's Waste Management Department may have started using my room as an extension of the landfill.  Without the smarts of a dog, I guess I forgot to mark my territory.  Too late now.

At least I found a temporary place for the books. 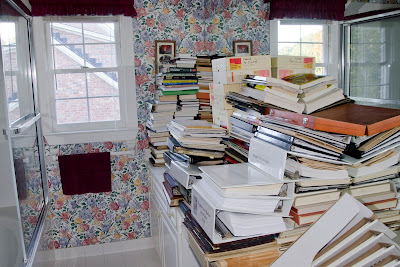 I just noticed the wallpaper in the upstairs bathroom.
(Aftrer 15 years)
It's awful!
Anyhow, I can cope with all of this except for one thing that terrifies me.   Sometime shortly before the dreaded carpet men arrive, I will have to shut down and disconnect my computer including the wireless connections to the internet!
How will I survive the day?!
I did get a reminder of how people lived in prehistoric times from a distant but very cool cousin and I'll break my rule against posting unoriginal stuff one more time: 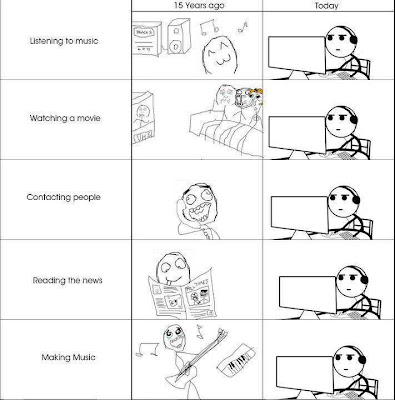 So, with any luck, I'll survive without the computer for a day -- hopefully not two -- and once we've moved all the stuff back onto the new carpets and locked out dogs, cats, and grandchildren, I'll hopefully reconnect and, with any luck, write another blog.
Maybe I'll bring up a bowl of chocolate ice cream.﻿
Posted by Bagman and Butler at 8:14 AM