The New House -First of a series with an uncertain ending

A lot of this makes no sense.  We know it makes no sense, and yet we keep moving further and further into it.  At the end of each non-sensical decision, we look at each other and say, "What are we doing?!!"

So far, I've been documenting attempts to sell our current house so we can downsize and move closer to the grandchildren and Karen's work.  I say "documenting" instead of "blogging" because I sometimes use this blog to journal about things for the future.  Maybe not as entertaining but...

What I haven't mentioned much is what we have been doing to locate a house we can move into after our current one sells.  Assuming that it does.  Big assumption.

And we keep breaking all the rules or guidelines we set for ourselves going into the process.

Assumption #1:  We would look but we would not buy anything until we were sure our house had sold.  We can't afford to own two homes.

Assumption #1 Broken:  We bought a house!   We'd be complete idiots but instead of buying someone else's house, we are having a new one built!  The advantage is that the contract has an out-clause in case we don't sell our house.   At some point in the building process there will be a "Go/No-Go" meeting -- probably in a couple of months.  At that point, if our house has not sold we can walk away without losing our down payment.

Assumption #2:  We will downsize.

Assumption #2 Broken:  The new home is bigger and more than we expected to pay 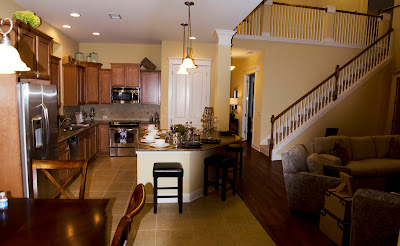 Kitchen in "Model Home"
Assumption #3:  We will be moving nearer the grandchildren and Karen's work.
Assumption #3 Partially Broken:  Well, it is a little closer but not all that much.
What are we doing?!!
Posted by Bagman and Butler at 1:03 AM