I refuse to hang wallpaper and would rather be hanged myself.  A long time ago, I attempted it - in order to make progress with a woman I was pursuing.  I covered her walls with wrinkles and bumps and air pockets and she never talked to me again.

So I was trying to slip backwards out of the kitchen when Karen suggested we remove the wallpaper in the kitchen. 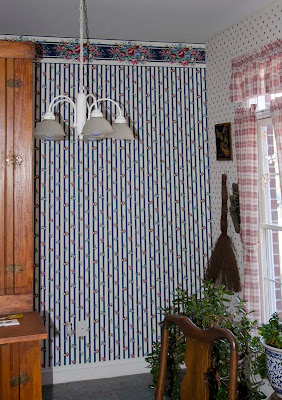 I conceded that it was ugly.  Several potential buyers of our house have come through and commented through the realtors that one of the things they did not like was the wallpaper.  But I'd happily drop the price so they could get it changed.
"But we bought the house with that ugly wallpaper," I said.
"No," Karen reminded me.  "We had to pay someone to hang it after we moved in because you refused to do it."
I started to tell her about my earlier experience but caught myself in time.  I've learned enough not to bring up other women even if it was 25 years before I even met her.  Instead, I said, "You mean that we actually picked that eye-straining monstrosity?"
"Why don't you see if you can get it down.  It might go easy and just peel off."
So the next day, with blind faith that it would just come off the wall in one smooth piece, I moved the furniture out of the way, took a corner and pulled on a corner.  I pulled off a piece that needed a magnifying glass to see.   I began muttering and headed to Lowes for scrapers, sponges, remover solution...
Lowes (and Home Depot) are always filled primarily with men.  I am convinced that each and every one of them is married.
Back in the kitchen, I began muttering more frequently.  After endless hours of work... 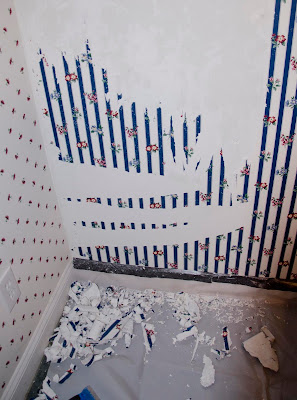 ...I had almost finished the first of 4 sheets.
At first, it seemed to go easier on the equally ugly decorative border at the top of the wall until I realized that the border was on top of the wallpaper so it was actually going to be twice as hard. 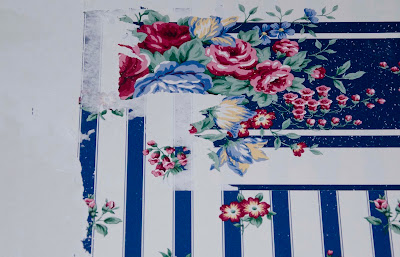 By now I was muttering nonstop.   I was talking to the wallpaper, trying to make deals.  Then I was threatening the wallpaper. Then I was making comments about the wallpaper's mama.
The various "How to remove wallpaper" sites on the Internet all made it seem like a fool could do it.  Although I quickly concluded that only a fool would attempt it in the first place.  The sites also politely suggested patience and being careful with the scraper so you don't damage the wall.
After days of work, I no longer cared.  By then I was muttering about the "How to remove wallpaper" sites' mamas.
So when the paper was finally off, I stepped back, looked up and saw that I had mutilated the wall. 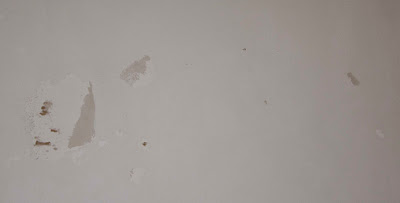 This is just one small section - gouges were everywhere
The fact that by then I felt that the $#&$ing wall deserved everything it got, did not change the fact that I would have to repair it.  Sort of like how we spend billions of dollars shooting up some country we go to war with only to spend billions more to help repair the infrastructure afterwards.
Back to Lowes for painter's putty, putty knives, spackle, etc.   I'm not muttering anymore.  I've grown to hoarse to mutter.
But I have to admit the result does seem to make a difference. 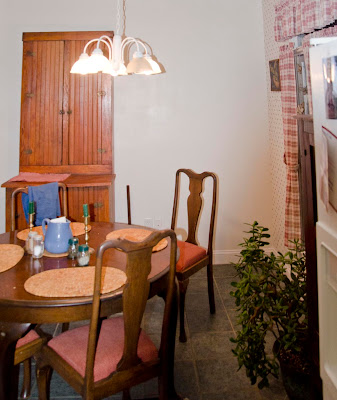 By the time we finish preparing the house to sell, we won't want to move out of it.
Posted by Bagman and Butler at 12:12 PM