Born on a Mountaintop in Tennessee

(Thanks to Kim, whose recent trip to the Alamo reminded me of my roots)

"Born on a mountaintop in Tennessee
Greenest state in the Land of the Free
Raised in the woods so's he knew every tree
Kilt him a b'ar when he was only three.
Davy, Davy Crockett, King of the wild frontier!"

...and one of my ancestors, on my father's side. 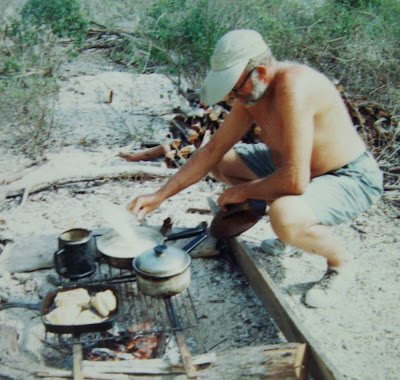 BUTLER: "That's not Davy Crocket.  That's Mark's Dad."
BAGMAN:  "Can it!  Let him tell the story."
BUTLER:  "But that's all it is!  An ego-drenched story."
"However," I interrupt. "For once it is not my ego.  If it is a made-up story, it was made up by someone further back in my lineage and passed down the line."
BAGMAN: "And there is that family resemblance..." 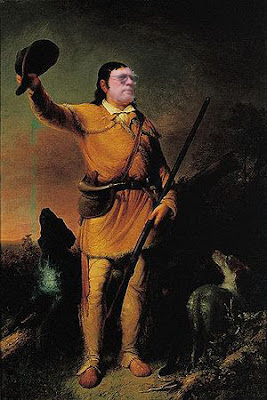 BUTLER (Puffily stomping out the door):  "I'm not going to participate in this fraud."
Anyhow, as the story was passed down to me, probably when I was a young boy enamoured of Fess Parker, one of my great-great grandfathers was very closely related to Davy.  Brother?  Son?  Cousin?  In any case, he bore the Crockett name.
He was also, apparently, one of the ones who graciously passed down the genetic propensity toward alcoholism which became such a great influence in my father's life...and mine.  Since Alcoholics Anonymous did not show up until 100 years later, my ancestor Crockett became a town drunkard, liar, horse thief, and overall ne'er-do-well.
Although Davy became best known for dying at the Alamo, thanks to Walt Disney -- not for the dying part but for the becoming best known part -- his family was much more proud of his election to the U.S. House of Representatives in 1824.
You have to remember that in 1824, being a member of Congress was really something to be proud of in contrast to the present day when being a member of Congress is a step down from circus clown.  My apologies in advance to those hard working member of the clowning profession.
But I digress.  The fact was (unless it was fiction) that my town drunk Crockett ancestor was besmirching the family name.  (I think this is the first time I've ever used the word "besmirch.")
Eventually he ended up facing a noose and the upstanding Crockett family intervened and saved his sorry neck providing he would change his name and never bother the family again.   He changed it to "Seely."
BUTLER (Poking his head back in the door):  "But your name is Cowell!  Aha!!  It's all meaningless jibberish!
"But you forget," I countered, "My dad's name was Seely.  As was mine originally.   When my maternal grandparents adopted me because my mom had died and my dad was at the height of his own ne'er-do-wellness, I took on my mother's maternal name.
Truth or fiction?  Who knows.   Since the story was passed down through a long line alcoholic ne'er-do-wells who have a natural propensity for lying, it's probably as true as the story about Davy Crockett killing a bear when he was three-years-old.
Posted by Bagman and Butler at 4:41 AM