A slightly different approach for me this morning.

I had a dream last night...a couple of related ones actually.  I always dream alot and remember most of them and I have always appreciated, enjoyed, and learned form my time asleep almost as much as my time awake.  Weird, huh?

And while the dream has little relation to the pictures I had chosen for abandonment -- the overall essence of the dream seem to sing to me of abandonment.   Mostly  internal abandonment since I sometimes view all the different charactors in my dreams as elements of my own self.

But since this is a photo shootout, here's a picture. 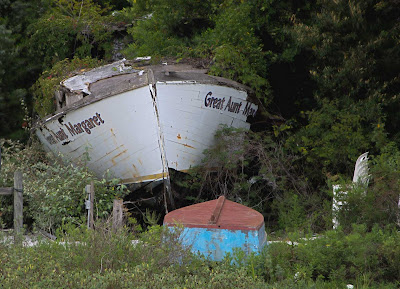 Abandonned fishing boat near the best
seafood restaurant in Mount Pleasant
(locals know it, but it doesn't advertise)
Feel free to skip the dream stuff and look at pictures --- but here is the dream:
It began with a dream fragment -- My three-year-old grandson, Conner and I were near a shallow lagoon and I noticed that we could see the bottom and wade everywhere on it, looking at fascinating fish.  Conner loves looking at fish and we were wandering around.  Near one side, I saw some big fast fish attacking a school of smaller fish and pointed it out to Conner.  Then we noticed that they weren't big fish but underwater leopards.  I looked up and realized we were actually in a kind of pool in a zoo and the zoo had opened and the keepers were letting all the animals out to drink.  Coming to the edge of the pool were tigers, lions, elephants.   I wasn't afraid (I made peace with wild animals in my dreams when I was a teenager and they seldom scare me in dreams) but suggested to Conner that it was time to leave.
Fragment ended. 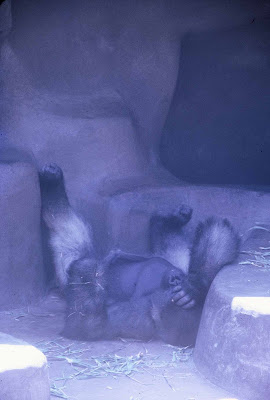 Then the main dream started.  I was sleeping on the outside of a narrow bed with Conner who was sleeping by the window.  (This part is true because that's how we ended up falling asleep last night on the bed in my office...including a toy leopard he had brought to bed with him...dreams love to work with artifacts we give them from the day).   I looked out the window and it was day time.  I was overlooking a huge pool where a man and a woman in wet-suits were playing with humpback whales.  I told you it was a big pool.   The man was riding them on the surface of the water.  The window was about three stories above ground.
Of course, I grabbed my camera.  What else is knew.  Moved Conner over to the edge and started to take pictures.  The man and woman then started throwing balls and the whales (four or five of them now) went crazy trying to beat each other to get the balls.  Somehow the water was now almost gone but it didn't stop the whales' happy frenzy.  They seemed able to run and jump using their flippers and tales just as well out of water.   I was shooting on fast multiple shooting mode...the camera clicking at 9 times per second.  The whales were joined by a large number of chimpanzees and young gorillas.  They were having a ball and the photos were probably going to be incredible.  (Too bad it was a dream!)
Another unrelated picture: 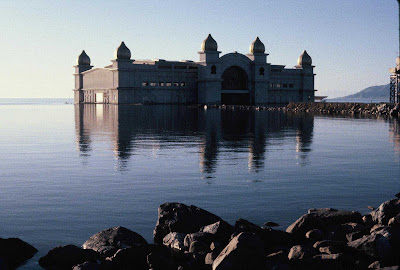 The Salt Lake City Palace Hall -
(abandoned to the rising Salt Lake in 1984)
Then the man threw on of the balls near the window I was looking down from.  The whales and chimps were pretty far away and I thought I'd get some good shots of them running toward me but, instead, around the corner came a huge alpha male silverback gorilla.  He was whale-sized, more like King Kong, except he was all silver and gray and age had taken away his bulk and his muscles were clearly saggy under his thick fur.  His face was drawn.   He touched the ball but was not so eager to play with it and seemed to want to sing a song instead.  Noticing me and Conner, he stood up straight and his face filled the window. 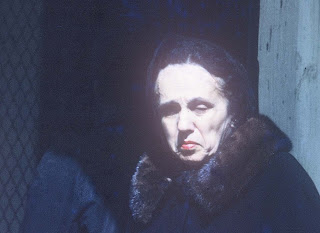 Woman in Montreal
Of course, I kept shooting but, responsibly, moved Conner behind me and we both began retreating in case the gorilla wanted to come into the room.  Which he did.  Conner and I left by a door in the floor -- dropping down to the ground level as the huge sad creature somehow fit through window (it was a dream, logic bends).   He came down, following us as well.   Conner and I moved through the lobby and out the big building's doors and out on the city street. 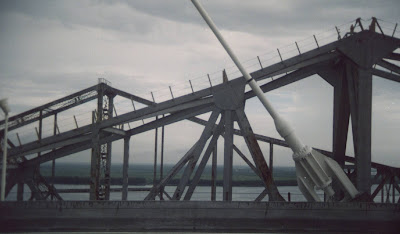 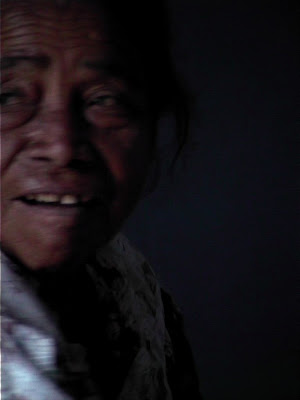 Woman in Oaxaca village where almost
all the men had gone to the U.S.
to pick fruit illegally and send money home.
(2003)
The primate's song made me sad and I wanted to go to comfort him.  I turned to make sure Conner was all right except that, in the dream, Conner had now turned into our dog, Daisy, who was off chasing squirrels.   The gorilla had gone back into the building and when I went to find him, there was only a small plaster statue in the lobby -- a copy of a Greek hero -- knocked off the pedistal and broken.
I tried to get back up into the loft but the trapdoor turned out to be part of a lightfixture and I couldn't figure out how to pull myself up and squeeze through the space.  I pulled out the frame in the ceiling and set off an alarm and the custodian showed up.  He wasn't happy with me and told me I was tresspassing and would not get me a ladder to get back up where the gorilla had gone.   I told him I had left camera equipment in the loft and had a right to retreive it.  He agreed but said that didn't require him to get me a ladder or help me. 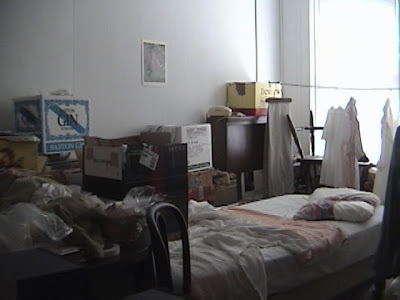 The one-room home of my cousin, David,
who disappeared from the family for 30 years
until I learned where he was and went to visit him
in Atlanta. 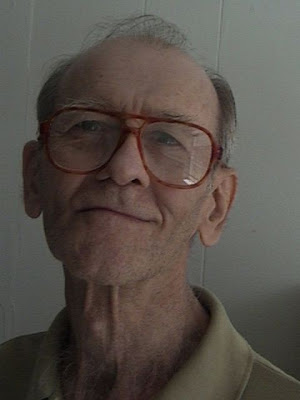 He was sort of glad to see me.
We spent the day together.
But he was clear that he had no desire
(and gave no reason)
to come out of his
self-imposed abandonment
By that time in the dream, I had been joined by the young woman.  (The young woman is someone who is with me in many of my dreams.  She has a family that seems to be of Baltic descent.  Her family accepts and loves me.  She and I love each other although we don't seem to be married and never have sex although we are physically close.   I don't recognize her from anyone I have ever known in waking life.)
She helps me and supports me as I try to figure out a way to climb back into the loft but I am too big to fit and I don't have the strength to lift myself completely up by arm strength alone.   So eventually I give up.   From above me I can sill hear the old gorilla singing, "I can't come out and play anymore." 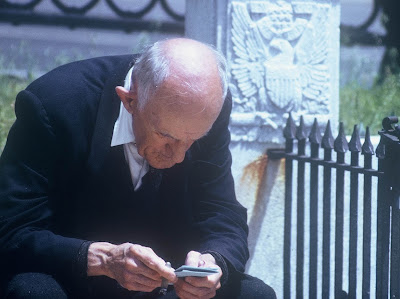 Miami
And that's it.
As I said, it was a different approach from my usual shootouts.  And I feel kind of sad now.  But I guess that's what the theme was about.
Posted by Bagman and Butler at 9:44 AM