The Beauty of Plastic Window Covering

"What you take picture of?!," demanded a short but feisty shopkeeper as she advanced on me from behind a wall of colorful scarves...

Karen and I had gone down to the Charleston Market the day after Christmas.

BAGMAN:  "Why would anyone go shopping the day after Christmas?"
BUTLER:  "Because everything is on sale."

BAGMAN:  "Being on sale don't mean you need it!"

I'll let Bagman and Butler argue the value of post-Christmas shopping by themselves.  For me it's a good outing for both of us because Karen likes the crafts and sales and I like the variety of things to photograph. 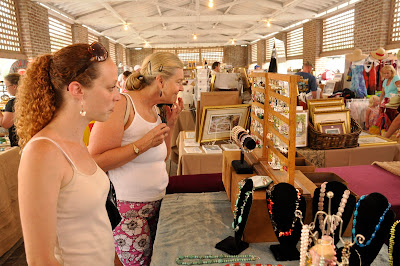 Shopping during my daughter's visit two years ago.
(IMPORTANT:  Note open air windows on either side)
The day after Christmas, it looked like this: 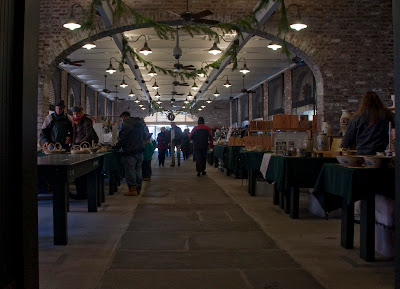 Not so many people when it is freezing cold!
(IMPORTANT: Although you can hardly see them,
the windows are all covered with thick clear plastic)
"You taking picture of me?!!" demands the shopkeeper as she backs me into a corner while I try desparately to pull up the desplay screen on the Nikon to show her that I wasn't paying attention to her at all.  And wondering why she didn't want her picture taken in the first place.
Karen had long since stopped watching me after I had zoned out into my usual photographic weirdness.  But I had noticed the distortions the plastic made of the world outside -- it was like a reality version of Photoshop.
"Why you take picture of me?!" continued the shopkeeper while other shopkeepers began to pay attention.  Finally, I got the picture on the camera's small screen and held them out toward her like a shield.
"No take pictures of you!"  I yelled back, unconsciously adopting her accent which was either Spanish or Cambodian. 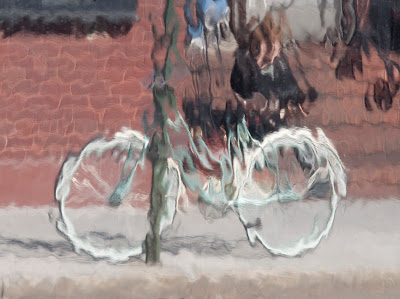 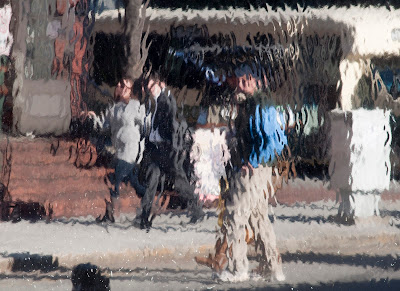 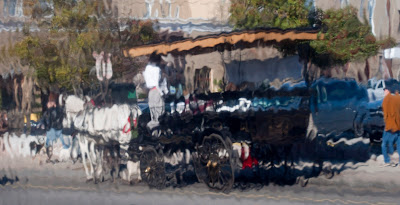 "See,"  I said.  "Beautiful, no?  Impressionistic?"
She stared at me as if I had lost my mind.  But she seemed to be molified that I had not taken a picture of her.  Finally she smiled and asked, "You want buy scarf for lovely wife?"
I briefly considered taking a close up picture of her wide smile but decided to skip it.
Posted by Bagman and Butler at 10:33 AM