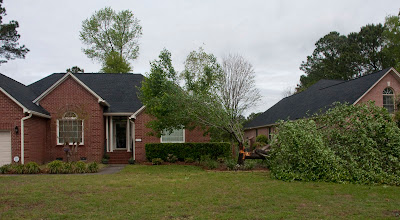 I think I've mentioned this sometime in some earlier post....

BAGMAN:  "After a certain point, you can't remember everything you've said."

BUTLER: "You could go back and look it up."

In any case, I have always loved lightening.  My grandmother told me that my mother was terrified of lightening and didn't want me to have the same fear.   So according to my grandmother, when I was a baby and there were thunderstorms, my mother would take me to the window and tell me how beautiful the sky was when it lit up.

We get lots of afternoon thunderstorms in South Carolina...and I love them.   Sometimes I'll go out and stand in the back yard...unless Karen catches me...just feeling the power.

Over the weekend, a fairly typical thunderstorm blew through early in the morning before dawn.   Counting the seconds between flash and thunder, the nearest strikes several miles away and fading.  Karen, Noah, and I were in the livingroom and she was trying to get his attention to watch the sky light up.  He wasn't much interested.

Then there was a huge simultaneous Flash-Boom that made us all jump (even a lightening lover such as myself).

"That was close!" Karen said.

Oddly, our neighbors, five houses down, never heard it!  They told me they have double insulated windows and slept through the whole thing.  I think they must sleep deeply enough to qualify for the Guiness Book of World Records. 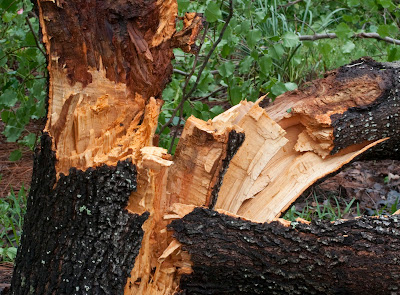 The flash-bang could not have been simultaneous.  I figured it out.  They live about 675 feet away.  At 1,126 feet per second, there must have been a .599 second gap between the flash and the boom from where we were.
Karen reminded me that .599 seconds is still not enough time for me duck if I was wandering about outside.
I'm sorry for the neighbor's tree, but I still love lightening.
Posted by Bagman and Butler at 11:55 PM