Great great great (I'm not really sure how many "greats")Aunt Agnes (left in the photo below) was almost always on the conversation menu whenever my family came together for holidays and such.

The picture below was taken sometime after her much maligned move from Boston society to a small farm in Illinois. 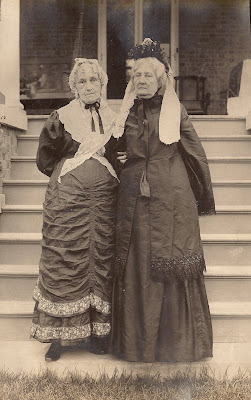 Beside her is Dame Edith Sutcliffe.  It is odd that I don't remember Aunt Agne's last name although she was part of my distant family but I remember Sutcliffe from conversations even though there was no blood relationship with her.
It also seems strange to me, thinking back on it, that in the same moldy smelling first album there is a picture of Dame Sutcliffe's husband, Judge Jacob Sutcliffe, pictured below. 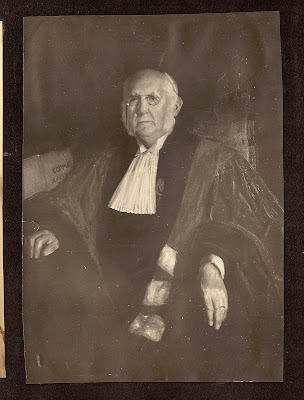 I suspect the person who pasted photos into that album was either proud to have a picture of the great Judge Sutcliffe or perhaps the Judge was taken in by the family, in sympathy, after his wife's westward move.

Arguments around the dinner table often centered on whether she had run out of him or whether he had arranged to have her sent out west because of her political activities on behalf of women.  Looking at thge picture, I see that later in life, he still wore a wedding band.  Whether that had anything to do with his feelings for her or his belief in the legal authority of marriage, I don't know. 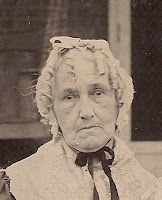 It was also argued but never known for sure how, before the operational, if not legal, failure of his marriage, the Judge and Dame Edith became part of Aunt Agnes's life.  She had been a spinster but very outspoken and it is thought she might have met Edith at a political meeting of women.  Although other peoples in my family have argued that she had something going with the judge.  However, that theory bears no weight because...
shortly after 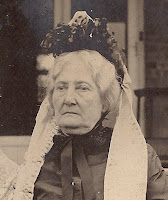 Dame Edith moved to Illinois, Agnes disappeared and neither of the women were ever discussed again for at least a generation.  There was only the picture at the top of this story which was sent back sometime later -- apparently to prove she was happy to those Agnes left behind that. Although they don't really look that happy, do they.
But the photograph provided fodder for much debate for generations to follow.
PS: The Honorable Jacob Sutcliffe apparently was sullied by rumors that his wife had run off with a woman, and lost any opportunities for a political career -- unlike today when scandal seems an essential part of any political career.  The judge took to drinking in his later years and died of gout.
Posted by Bagman and Butler at 7:14 AM