And now from the purely medical point of view

Butler and I have decided that there has been too much humor over my humerus and we feel that at least one blog needs to be medically accurate for the scientists who might read this. Therefore, we have acquired the actual X-Rays and Analysis from the Emergency Room.


Below is the unedited version my broken arm written in actual Medicalese:


For those of you who have never learned Medicalese, this basically means that, despite the fact I was no longer at work but had commuted home and was in the proximity of humor when I tranversed the living room and struck the couch just below my very funny neck. The impact did involve my funny neck (unstated but implied here is that my throat, located in my funny neck, was forced to make loud cries of pain). I'm not sure why they chose to comment on my funny head and glenitals - maybe they enjoy adding sexual comments. At least they think my head and glenitals are anatomic. Or maybe it means that they are not radioactive. Finally, they note that my sense of humor is intact but only at a distance and is rather mild. Strange that they never mention the actual broken bone.

However, they did provide a photograph which Butler and I are able to decipher. 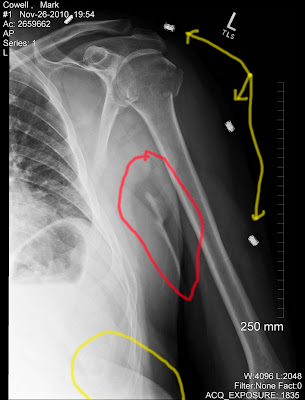 First, please note the yellow arrows. It appears that when I imbedded myself in the couch, several bedbugs took up residence in my body. After pointing this out to the doctor who had missed it entirely, he referred me to a pestcontrolologist for further treatment.

Secondly, the yellow circle at the bottom of the X-Ray indicates why I am having trouble fastening my pants.

The odd parallel lines and triangle circled in red confused both Butler and myself but after extensive Internet Research we discovered that this was an increasingly common physical adaptation to regular use of seatbelts.

However, it is strange that Butler and I have not mentioned the actual broken bone either. Looking more closely, however, you can see the actual image of the couch imprinted on the bone - red arrow pointing to broken bone. Karen calls it a sofa but I prefer couch because it includes the word "ouch." 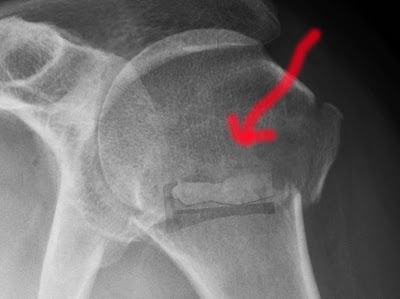 Medical doctors, of course, use the Latin term, "Brokenus Bonus" so they can bill insurance companies for it.

Any questions?
Posted by Bagman and Butler at 12:51 PM