Missing the Friday Shootout and an Old Governor

Well, I missed today's shootout...well, by the time I post this I will have missed yesterday's shootout.  I really didn't have any black and whites anyhow...well, sure, I have lots of old ones but my brain wasn't connecting them with anything.  And I could have cheated and just removed the color from any shot.

And this morning I had to get up early and drive to Myrtle Beach for the monthly meeting of all the South Carolina County Directors of Alcohol and Drug Agencies.  I've only got two more meetings to go to (and 45 work days but who's counting?) until retirement.

I'm going to miss these guys (and gals) -- a great bunch of dedicated, if sometimes odd, characters.  Even if we are still having the same discussions about the same issues that were being discussed 13 years ago when I first showed up in South Carolina.

Okay...From the first year I started my job...determined to change the world, or at least South Carolina, and wondering, at the same time, if I could remember where the restrooms were. 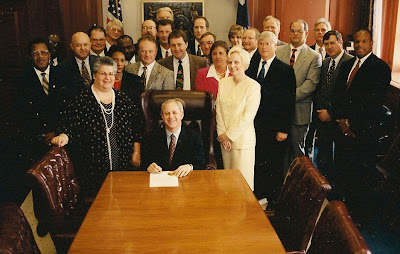 Governor Hodges was elected the year (or was it the year after) I arrived.   At least 1/3 of the people in that photograph have moved on to better things...or at least moved on.  I stood way in the back because I was still a real "newby".

BUTLER:  "There you go with those made up words again!  Why don't you use correct vocabulary?"

Anyhow, this was actually the only group shot we ever had with the Governor -- who appoints the State Director who gives us money.  Less and less each year now.  We were all very competative then, not to mention rather infantile.  We whined about the State Office a lot.   Which is probably why the State Director arranged to have all the County Directors have their pictures taken, smiling with the Governor.  ("I'm cutting your block grant but I got you into a photo-op.  You can thank me later.")

Since then, over a ten-year adolescent period, painfully we learned to work together and matured into a pretty effective group.

I wonder if I'm going to start getting nostalgic about something every day for the next 44 days (but who's counting?).

But I remember the day this photo was taken very well.  I remember what everybody was thinking.  Everybody in the room (except for three people) was thinking the same thing... 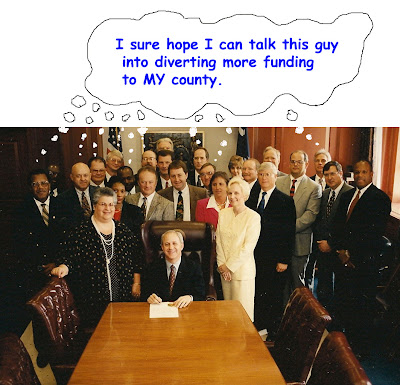 First there was the newly appointed State Director who was thinking... 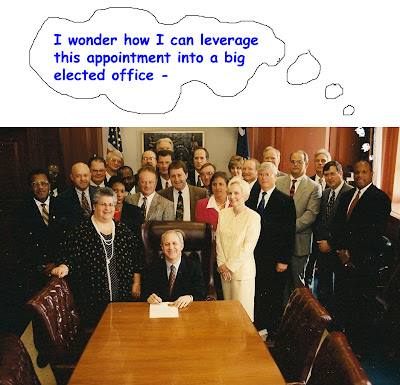 Secondly, there was the Governor himself who was thinking... 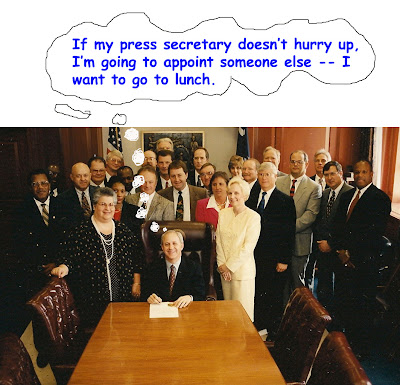 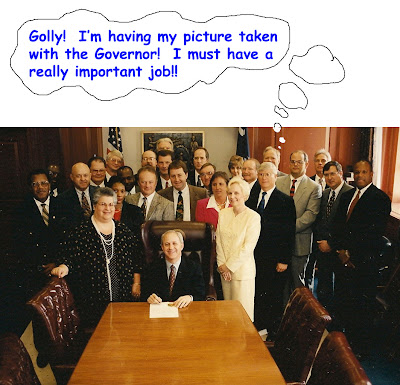 I hope I can show up for next Friday's shoot-out.   One of the things I've realized about having only 44 more days is that I have a huge amount of stuff to get done before I leave.  I really want to tie up as much as possible so I don't leave my successor a whole bunch of unfinished gunk.

At least I have finally figured out where the restrooms are!
Posted by Bagman and Butler at 11:53 PM