Shaving the cactus with Charles Darwin

Okay, so I’m not the world’s most careful man when it comes to shaving in the morning.  I have learned, through years of nicks and rolls of toilet paper stuck in little patches on my chin, not to cut myself.   Most of the time.

But I tend to use too much shaving cream and often splatter it on the mirror or wall or faucet in my haste to get to work on time.   49 more days until retirement – but who’s counting?

This morning, however, the flying glob of shaving cream landed smack dab on the little cactus that decorates the sink. 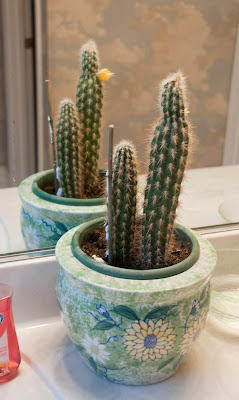 Splatterd shaving cream is usuallty not a problem.  On the mirror, wall, or faucet, I just scoop it off with my hand but this was a sticky wicket.  I am enough of a strategic planner to know that this time,  I’d come away with a hand full of prickers.

I don’t care if it’s a word or not…I know what I mean. So, anyway,  I considered using a paper towel or toilet paper but I surmised that I would just end up with a bigger mess – suds and torn paper stuck on the cactus.

BUTLER: “At least ‘surmised’ is a word.” 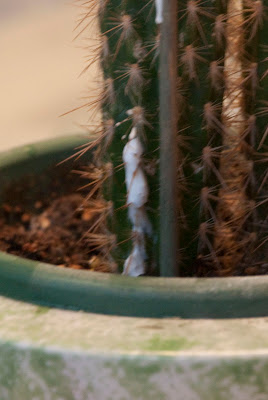 Could I use a towel or wash cloth?  Probably end up with lots of little prickers stuck in the towel which would be an ugly surprise for whoever used it next.

And then I lapsed into the kind of meaningless digressive thought that hits me all the time and leaves me staring into space. Rather embarrassing when it happens during business meetings.  49 more days.

I considered, since there was already shaving cream on the cactus, if I might just shave it. Why don’t cactuses shave?

BUTLER: “Cacti.  The plural of cactus is cacti.”

Well, they probably don’t shave because they never evolved hands. And prickers were useful evolutionarily because it kept them from being eaten. And why do we shave – maybe I’ll grow a beard when I retire. More specifically why do we still have hair growing on our faces but not so much on our bodies? Millions of years ago, early men (which includes early women) were hairy all over. It helped keep them warm.

BUTLER: “What about women? They don’t have hair on their faces. “

BAGMAN (grinning to discover he had suddenly had an original thought): “Because they invented kissing!”

I think about that for a moment. But if they were kissing men, why didn’t the hair disappear on men’s faces over a million years?

Eureka! Because men are so impatient! They are unwilling to wait for a million years of evolution in order to start kissing, so they invented shaving! Always looking for the faster, easier way, we short circuited the smooth skin evolution.

BUTLER: “It must have been painful back in 1 million BC trying to shave with a piece of flint and no shaving cream.”

BAGMAN: “But if it led to kissing…small price to pay!”

At that point, I snapped out of it. I realized I was now late for work and there was still shaving cream on the cactus. I decided to leave it there and no shave the cactus. Maybe a million years from now the cactus will evolve into a cucumber.

Unless it evolves hands and starts shaving in order to kiss other cactuses.