Problem #2:  Now that we have four adults living in the house -- sometimes 5 when Barclay shows up -- the driveway is one of those sliding puzzles where you always need to move one car out of the way to get another car out.  We priced the cost of hiring a fulltime valet but decided we couldn't afford it.  So in the morning, whoever was leaving first, had to tiptoe into other people's rooms to find keys, or wake them up and ask for them to move blocking cars... 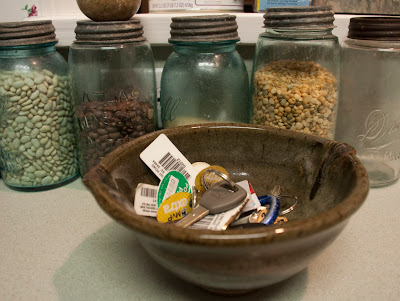 The Kitchen Car Key Bowl!!
It took awhile and a lot of mutual reminding for all of us to remember, but the idea is that when you first come in the house, you drop your keys into the bowl.  That way, all of us have access to any car at any time.
By the way,  I just noticed in the background that I've captured the decoratve antique bean jars that I mentioned a few days ago in a discussion of Hoppin' John.  Notice the the jar on the right is empty?  Proof that I don't make things up.
BUTLER :  Not actually proof, Mark.  You could have easily emptied the beans for the photograph and put them back.  But it was a nice try.  By the way, the bowl looks more like a "bar code" bowl than a "car key" bowl." 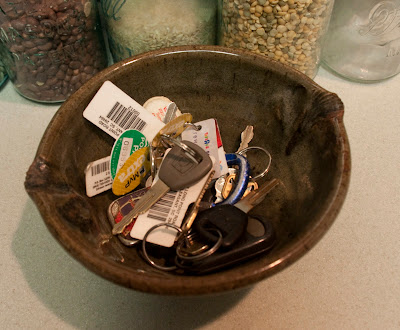 So it does!  And how did it come about over the last decade that every supermarket, drugstore, department store now gives you a piece of plastic?   Marketing.  Phooey.
BAGMAN: "Hey!!  I just got my membership in the Food Lion Club!!!   Look at this cool membership card!"
Did you get the secret decoder ring as well?  When do they have their meetings?
I'm guessing that all the miniature key cards on the keyring above are Melody's.  Brian would have lost the card before he found his keyring.  And Karen keeps her cards in her purse.  In fact, she has a whole separate wallet like thing to keep them in.
And I have refused to keep any card in my wallet that is not absolutely necessary -- and it is still to fat with plastic.  License, credit card (just one), ATM card, library card, and Sams Club Card (because this is one shopping chain that actually makes you show your card before they let you in the door!).
BUTLER:  (Continuing to be his eagle-eyed self):  "Wait a minute. I just blew up the picture and look very carefully and..."
What?
BUTLER:  "Brian's keys aren't in the bowl."
Posted by Bagman and Butler at 8:18 AM