Night Sounds and the Queen of the Birthday Police!

It started around three a.m.    And sleep is already a challenge in our household.


With four adults, two toddlers, two dogs, and two cats...night noise was rampant even before we decided that we needed a comprehensive electronic baby monitoring system so that all sounds anywhere could be amplified and transmitted directly to a small speaker next to our bed.
Therefore, before three a.m. we were just semi-sleeping in between the normal sounds:
1.       The soothing radio in the children's room that has somehow become tuned to a wavelength halfway between an evangelist and a rap station.
2.       The dogs periodically keeping the house safe from anything that appears to move in the yard.  They are tiny dogs so their yelps are not at all threatening unless they are amplified by the baby monitor.  I think they have learned this and always go to a transmitter before barking.
3.       Brian's snoring which does not need amplification.
4.       My snoring which also does not need amplification.
5.       The rich songs of our male Himalayan cat who has a nightly venue of shows in which he does impersonations of great Italian tenors.
6.       Periodic wake-up noises from the two children who startle, then whine for a while -- I think they are trying to get someone to come and change the channel on the radio.  The radio confuses them by instructing them, alternately, to either shake their booty or quit their sinful ways.
7.       Multiple unidentifiable creaks, bangs, moans which may be ghosts, burglars, or warning signs of an impending Earthquake.
But this morning, at three a.m., another sound entered what we laughingly call sleep.  A Chinese gong.
"What was that?" said my wife.
"My Blackberry," I said.  "It does that when I get an email."
"At three a.m.?"
"It's only three a.m here.  This is only one of 24 time zones."
"GONG!!"
So I find my glasses in the dark and check my Blackberry.  God bless technology.  My email is notifying me that Facebook has notified it that someone has wished me "Happy Birthday."
Facebook!   Facebook is taken on the traditional role of the matriarchal family's grandmother.  Facebook makes sure that we are all socially networked.  Facebook makes sure that we always know what everyone else is doing.  People we love, relatives, friends, people we used to know and can't escape from, people we don't know at all.
My insurance company wishes me 'happy birthday,' for Pete's sake.  But then again, they have good reason.  As long as I keep having birthdays, they don't have to give money to my wife.
"GONG!"
It is now four a.m. and I decide I'd better start the day early because I am going to have to write a lot of little emails thanking people for their good wishes.   I will also have 34 more friend requests from people who are friends with people who are friends with someone I once confirmed as a friend...
On  my way to the computer, I stopped by the children's room.  I  leave my Blackberry next to the baby monitor transmitter so everyone in the house will be able to hear the birthday greetings gonging in my direction.
The cat is already sitting at the transmitter taking a break between sets.  "Do you take requests?" I ask.  "Can you do 'Fiddler on the roof?'" 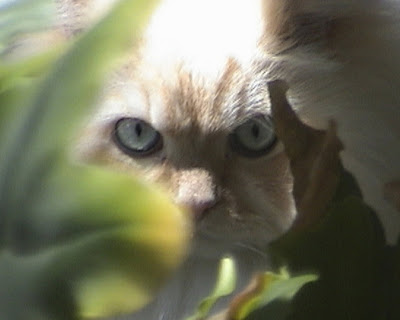 Posted by Bagman and Butler at 8:48 AM