Helping Sally with the Hometown Shootout

Up shortly after 4:00 a.m. this morning to make use of the quiet time in the house before preparations for going to work begins, to read blogs, and to help Sally finalize tomorrow's Hometown Shootout.

Instead, I get lost trying to find a photograph of Sally when Santa first brought her home and finally realizing that the picture I was looking for was still in an unscanned negative...so the puppy shot I wanted is still outside the computer. Oh well. The earliest shot I could find was when she was already 6 or 7 years old. 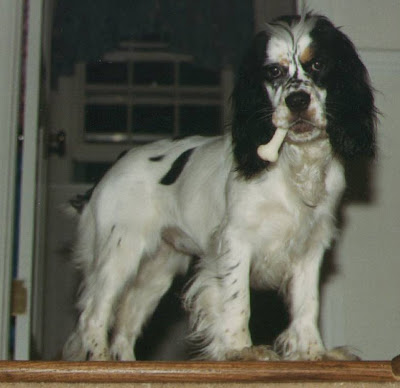 It will have to do. I wrote a task for myself to find and scan the early shots soon.

Back to the task at hand, of getting tomorrow's post ready. If you recall the theme for tomorrow's shoot was "Random"...and I cannot wait to see the beautiful shots you all take. Sally's shots will be pretty random but may not excel in quality because, well, because she is a dog.

I was asked early in the week by one of you to share the process by which I taught her to use a camera. It was not as hard as you might think. She is now a very old dog but is still capable of learning new tricks.

First of all, I had to shorten the camera strap as much as I could so it wouldn't drag on the ground when she walked. I put a hood on the camera anyway because when she stopped to smell things, the front of the camera would still bump on the ground.

The Nikon D-90 that I use is still pretty complicated and although her nails are bit long and sharper than my finger and capable of pushing many of the tiny adjustment buttons on it, she could not turn the adjustment rings because her pads were too dry, the hair on her paws too furry, and her nails to slick to get get a grip on them. Therefore I had to set it on automatic and hope for the best.

The vet recently told us that Sally is not actually going blind but her peripheral vision is very blurry and she cannot see close objects very well. So she agreed to the automatic setting. Her back legs are weak but her front legs are still pretty strong. But actually gripping the camera without opposable thumbs presented another problem. So I attached some velcro strips to the sides of the camera so she could position it with effort. After that, clicking the shutter button was easy for her. But she did have to kind of shoot blind because she could not look through the viewfinder very easily.

Finally, she wanted to be able to use the zoom lens but turning the ring had to be done with both her front paws and with weak back legs she had to sit down to do it and getting back up was a problem for her so mostly she just shot with it set at a wide angle.

Given all that, her photoshoot of her hometown, which is now mostly the house and yard, was probably some of the best photography that I've ever seen from a dog. I hope you will like it.
I also helped edit some of the typos in her commentary. Her spelling is poor. I originally thought it added some of her personality but she is a little proud and a little self-conscious so I agreed to clean it up a little but I did not want to wordsmith it.

I did feel a little bad because in a couple of places she complains about having to be on a leash. And I am sad about that too because for much of her life she ran freely and, a very good dog, always would come immediately when called. But now she is totally deaf and, perhaps a bit absent minded, and will run off...well, kind of slowly trot off...and I have to get in front of her to get her attention wtih hand signals. And afer a few times when she managed to trot out of sight and scared us to death becase we couldn't find her and she couldn't hear us calling...we reluctantly started using a halter and leash.

She has mixed emotions about it because she's not crazy about the collar but she really likes the fact that I am always with her so she can teach me things. She particularly likes it when it is really raining hard. In the past, I would just open the door and urge her out and stand on the steps. But now she gets a kick out of making me go out and get wet. Most cockers like water and she thinks it is a hoot that she has a nice coat of fur and I just get sourpussy and drenched.

In fact, she tried very hard to convince me to let her put some rain pictures in her shoot tomorrow and was irritated on the one day it rained this week that I wouldn't let her take the camera. She didn't care that dragging the Nikon through mudpuddles would damage it. She's a very intelligent dog but has little understanding of economics and monetary value so she thought I was just being obstinate or trying to put limits on her creative ideas.

In any case, I will turn the blog over to her tomorrow. I am sure you all will be as welcoming and kind to her as you have been to me. She is a bit self-conscious since this will be the first time she has ever submitted photographs in a forum that is primarily populated with humans.

Posted by Bagman and Butler at 5:00 AM