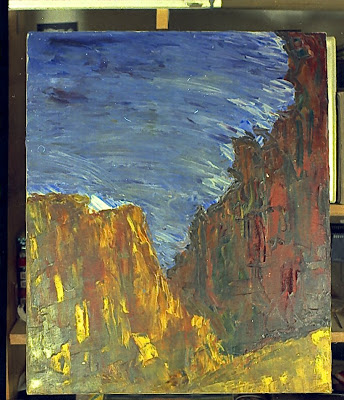 There are times when I take out the camera and walk around in the real world pointing it at things and clicking the little button. Bagman thinks I should do more of this. Butler agrees but thinks I should do it more meditatively because I am relying too much on Photoshop to correct too much that could have been done up front.

Then there are times when I sit in front of the computer screen and slide a myriad of Photoshop sliders to prepare pictures to be blogged or printed. Sometimes I print and frame them.

Then there are times when I pull a random selection of old slides or negatives out of sleeves or envelopes and scan them into digital. I call this “riding the time scanner” because it takes me back. Sometimes I get surprised.

Last night, I was rifling through an old box in the shed and suddenly found some envelopes of negatives that had been lost for years midst unrelated junk at the bottom. Stuff stuffed without thought or care, forgotten but carried from storage shed to storage shed. These negatives had not even been put in sleeves but thrown into envelopes. Some were 35mm some were larger format 2 ¼ square, and some from camera formats I don’t remember even owning. I almost threw them away because they were a mess, stuck together in places, scratched, and some discolored. Some smelled bad and some shared envelopes with mouse droppings. But a few took me back…poor focus, scratched…but riding the time scanner I found myself back in 1972 to a time when I was drawing and painting in oils. 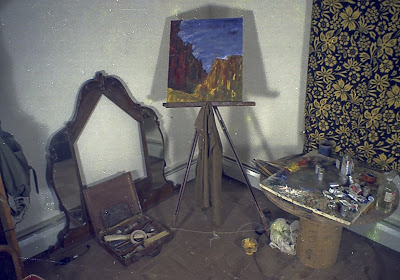 I had forgotten I had ever done that. But there was the easel and my grandfather’s wooden paint box. I don’t mind having thrown away the paintings but wish I had the box back. And I don’t think I’d call them paintings – more like artifacts, fossils from a prehistoric me.

I know it was 1972 because one of the paintings was signed and dated. 1972 was 4 years before I got sober so these fossil images were all done while I was drinking and smoking pot. 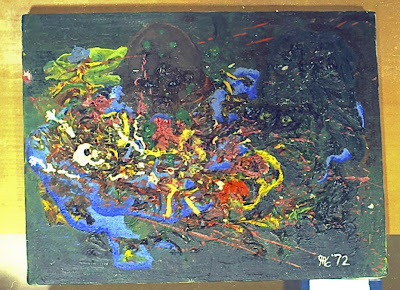 The one above looks like it was more drinking and less pot. 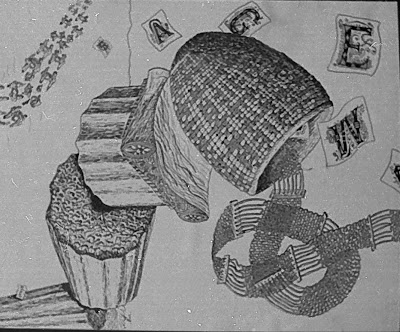 This one was, on the other hand, was probably more pot and less drinking.

And the one below is probably a classic. 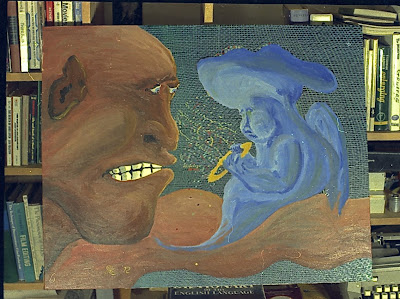 This one really got to me! Because I remember very well painting it during a rough week of guilt-ridden, alcoholic withdrawal, when I was vowing to myself that I'd never drink again. Of course, I went back to drinking within days after finishing it because I had not yet found the secret of A.A. But now, 37 years later, I can see it was the genesis of Bagman and Butler, the two sides of my personality. Bagman is clearly holding the upper hand and not very pleased at Butler's appearance. But Butler is just beginning to mesmerize the brutish Baggie with little angellic spots emmenating from the halo in his hand. There would be 4 more long years before Butler allied himself with A.A. and finally got Bagman to stop drinking. And there would be decades more of other compulsive wars during which innocent people would be caught up in the battleground of divorce and other friends and family would be exiled to escape the internal warfare of delayed maturity until I eventually negotiated the relatively peaceful coexistence that exists today. These guys have come a long long way. Whew.

And the last two, below, I don’t remember doing at all. 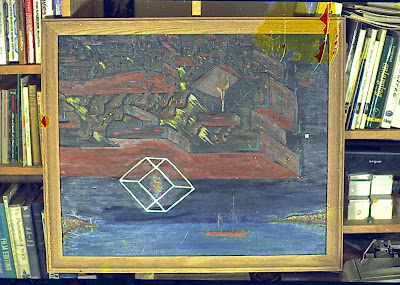 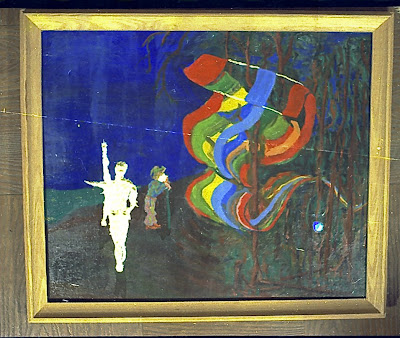 Okay. Well, that was fun. I think. So now, I’ll gratefully return to the present and start shooting some pictures for Friday’s hometown metal shoot-out.

And get my ass to an A.A. meeting.