Coming home, Friday afternoon for a week of vacation, I discovered Karen had been shopping on-line! (The reason I ended that sentence with an exclamation point instead of a period is because Karen has never shopped on-line before). 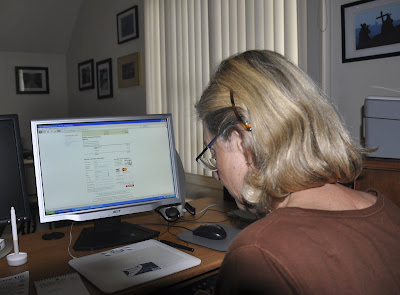 One of her goals over the her summer break from school was to become better with the Internet. But to find her shopping on-line already had me cheering on her success!

Granted, she was not looking for fancy camera equipment or computer games or designer shoes. She had been trying to find a replacement part for our refrigerator. I case I’ve never mentioned my gratitude – her practical nature is the very foundation for the freedom Bagman has to goof off.

“I just wanted you to check out what I found before I actually place the order,” she said. And I was happy to oblige. She had already managed to locate the brand and model-number of the fridge and out of a selection of twenty-thousand different parts, found the odd-shaped little plastic shelf support thingy that had cracked under too much weight of bottled water.

“Go down and look,” she suggested. So I ran downstairs, opened the door, removed milk, grits, bottled water, a tin of batteries (because someone had once told us that batteries last longer if you refrigerate them), mustard, and Cool Whip. I removed the underneath bin of lettuce, cheese, and cucumbers and stared at Part #480. Comparing left and right. Or right and left depending your point of view. Committing them to memory.

Then I put back all the food, closed the door, ran back upstairs and stared at the photograph on the screen. The website let you examine the part from three different angles. By the time we had flipped the virtual part all over the place, I had forgotten what I had tried to commit to visual memory.

I ran downstairs and repeated the process. I ran upstairs and repeated the process. It was like one of those intelligence tests or something I remembered from taking the SAT in high school. Which shape matches the shape in column A if it were flipped 180 degrees. I ran downstairs again! I was beginning to worry about food spoilage with all the opening and closing of the fridge door.

Then Karen had a brilliant idea. “Go take a picture of it!”

So, once again, I emptied everything, took out the bin, and shot the part with the camera. I decided this was the first time in my lifetime of being a photographer that I had ever tried to shove my head and my camera into a refrigerator. Click. 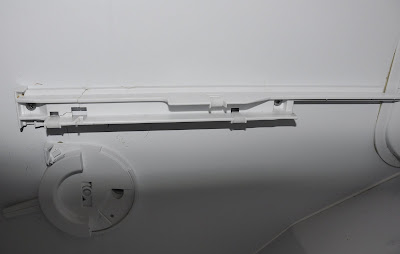 We could order both parts and return one.

We could flip a coin.

We flipped a coin. Wish us luck.

Posted by Bagman and Butler at 6:33 AM