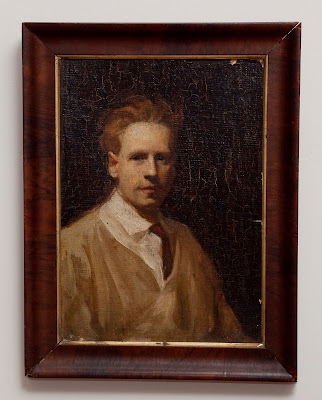 My grandfather (on my mother’s side) was Joseph Goss Cowell but I always called him Grandee. He was born in Peoria, Illinois on December 4th, 1886.  But I’ll try not to get into a dry chronology of his life.  There is a little information on the net.  Not much since he preceded cyberspace.  But if you want a little background. there is a pretty good one on the Trinity Church Website in Wrentham, Massachusetts -- http://www.trinitywrentham.org/joscowell.htm.

He was an artist -- painter, sculptor, woodcarver. Before the Great Depression dropped the bottom out of new church construction, his specialty and love was creating alters. The one I know the best is the Children’s Chapel in Washington’s National Cathedral. I did not take the photograph below and apologize for any copyright infringement – but I don’t have a picture myself and it was what I could find. 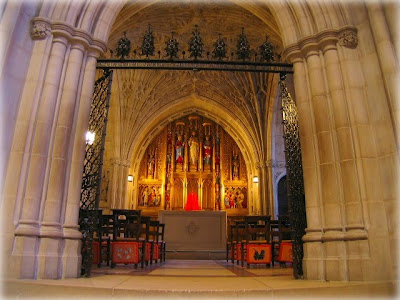 Cathedral artists never signed their work but he used to talk about it. When I visited the Cathdral a few years ago – unfortunately without camera – I was wondering which chapel was his. But even from a distance amid several other chapels in cathedral alcoves, I knew it immediately when I saw it.  I can’t explain how. I guess, having lived with his work all my life, I just recognized it. 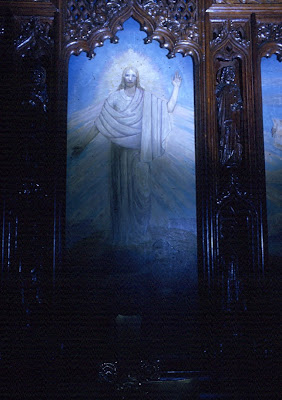 In Boston, he shared a studio with John Singer Sergeant.  For a long time, he had one Sergeant's pallettes, cracked down the middle (which is why, I suppose Sergeant parted with it) hanging in his studio.  Years later, my grandmother, whose memory was beginning to fade at the time, threw it out.

Mostly now, I find myself recognizing parts of his being imbedded in myself.  He was my primary influence due to the fact that Jean, his only daughter and my mother, died when I was 6. 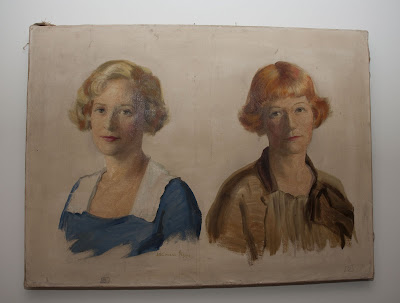 My mother and grandmother

If you click on the painting above and look closely you will see two little pencil drawn hearts in boxes that I drew, as a child on his painting.  My grandmother was upset at first but Grandee said he thought it added alot to the painting.

My Dad (who I’ve talked about in earlier blogs) was an alcoholic, was unable to raise me after my mother's death, so I grew up with Grandee and Gramzee (Helen Cowell, my grandmother who was also a larger than life character for another blog at another time).  All the kids in the neighborhood knew them as Grandee and Gramzee. 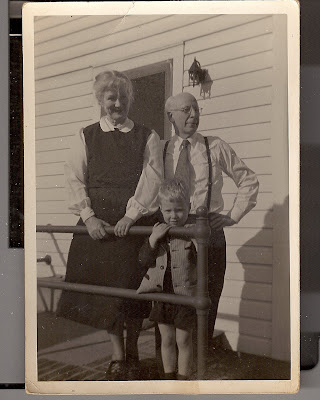 Before his death (1970, I think) he instilled more of himself into my own soul than I was aware at the time.  Butler and also (I fear to say) Bagman are both direct descendents of his. In fact, I’m going to let Bagman, himself, write about Grandee’s wilder side in Part 3 although I may have to censor some of it. And Butler will provide a tour of some of his artwork on Hometown Photo Shootout Friday.  I know the theme is "My Faviorite Things" but his artwork certainly qualifies for me.  Besides, Friday is Grandee's birthday.

And tomorrow I’ll share some of the things he taught me.

It’s odd because growing up, I thought of him as overly strict. But in pictures I can tell that I was usually the target of his overwhelming love. 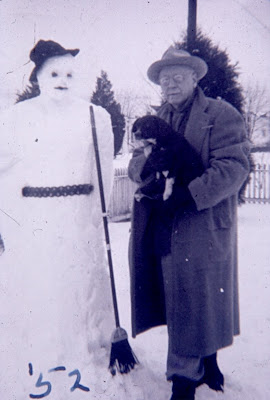 Frosty, Grandee, and my dog Skippy

Always the artist!  Being a kid, I was remember being embarrassed by this snowman at the time because I thought it should look more like a regular snowman.

He gave me my first camera that had adjustable speeds and aperatures. 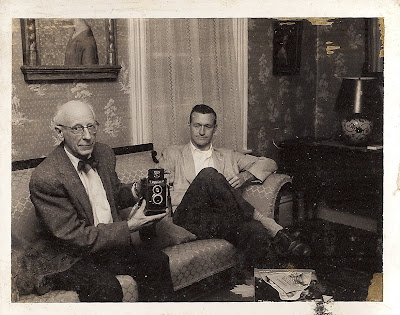 (Another Mark Cowell, my uncle (or cousin) who we called Mickey)

I have another confession to make.  Back then I was grateful for the camera but I blew off some of his suggestions about photography.  After all, great as he was, he was an artist from another era.  Photography was the new art.  What would an old painter and sculpture know about cameras. 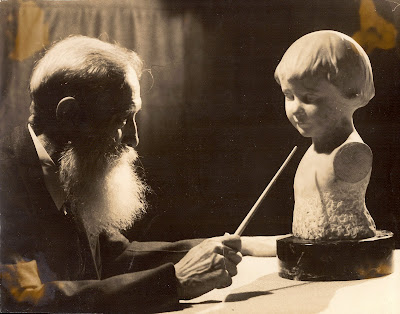 I'd seen the picture above many times.  This is the marble bust of my mother that Butler may mention later.  But it was only a couple of weeks ago that I took it carefully out of an album to scan it and on the back, Grandee had written:  "Taken for photography class."  Duh!  Now I'm thinking big bellows cameras, glass plates.  Of course he developed and printed everything himself.  Heck, he used to make his own paint sometimes. 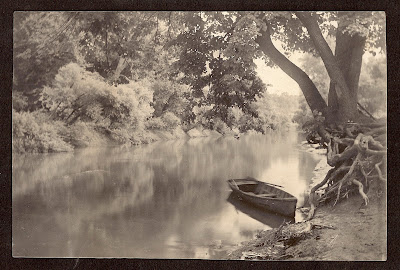 So I went back and found another I had remembered and looked at it.  Sometimes I have to be reminded to look at things.  I'm sure he could have told me alot about photography.

"But now I do Digital and Photoshop," my ego proudly tells me.

But, thinking more, I just play with it really.  Grandee would have mastered the science behind it, the conversion of light to data, to pixels, to dots of ink...ah well.

He believed in studying the bones and muscles behind the flesh.  He said, "How can you draw a body if you don't know what is under the flesh." 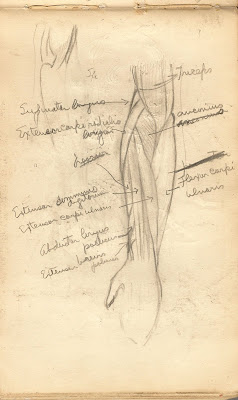 And he had insight into mortality as he did it. I always laugh at the sketch from his notebook below. 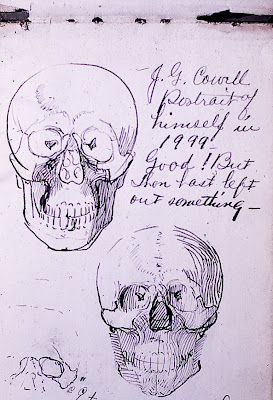 Finally, I remember most the smell of oil paints, linseed oil, wood chips that permeated every place I ever lived.

Over the next three days, I want to cover some of the things I learned from him, some of his art and on Thursday, I really do need to cover his sexual nature...Bagman will help write it.  I considered not talking about that because he was, after all, my grandfather...but like Picasso and many other artists, his passions were part of who he was and I felt a certain honesty would be missing if I didn't mention it.