My Grandfather -- Part 3 of 4 (Mature Audiences Only)

MARK and BUTLER both interrupt violently:  "Hold it!  Hold it!  We're not going to let you just destroy that wonderful man's reputation that easily!"

BAGMAN: But you promised I could write this piece!  And how does the fact that an artist likes women destroy his reputation?  How about Picasso?  He was an artist, dammit!  Go away and let me write it.  You're too close to him.  I know you're scared of showing a photo he took of your grandmother modeling is too much for you. 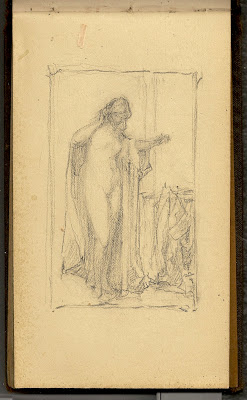 BUT SHE WAS MY GRANDMOTHER!!! 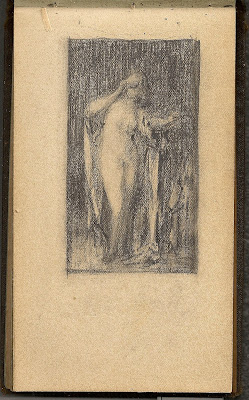 And neither of them would have minded if they were alive today.  You still get hung up between his spirituality and his sensuality.  The question never came up with him.

With GREAT trepidation, I step back to let Bagman tell this part of my grandfather’s story.

YOU'RE NOT GOING TO TELL THAT ONE!

Oh yes!  It's a legend.  From the beginning he was wide open about talking to you about sex! In fact, when you were only in kindergarten and asked some innocent question about babies, he gave you the straight scoop about intercourse and described it detail.  No storks for you! 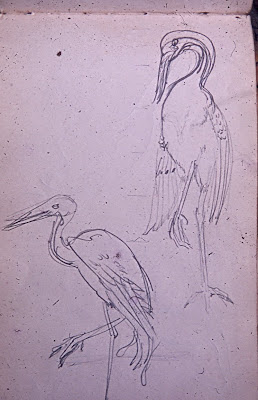 BAGMAN:  Stop changing the subject.  Anyway, the next day your little friends in Kindergarten class were trying to tell you about the stork and, armed with the details, boy, did you set them straight!  Now I wasn't around then and being five or six you had no real concept of a girl’s anatomy and even less concept of semen. So you told your friends that the stork was a lie and that babies are really made when a boy urinates in a girl’s anus.  Yes, you had an advanced vocabulary and those were the words you used. A logical interpretative mistake on your part.  But the next day when your friends returned to school they had notes from their parents to your kindergarten teacher telling her not to allow you to play with them anymore.

He was a master of the human body and painted lots of nudes.  And here come some pictures.   Not another word, Mark!   He was an artist.  He painted nudes.  You can't do a blog about him without showing some. 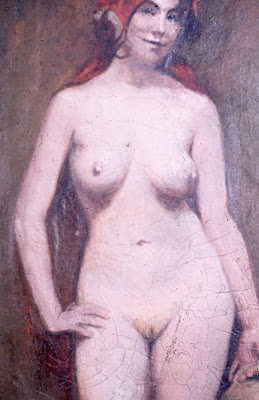 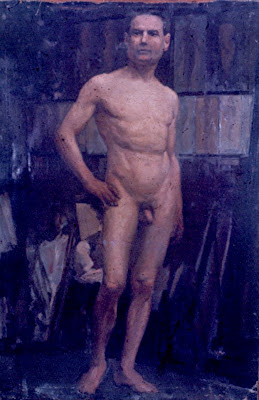 This last one was one of his favorites because of the legendary practical joke he played on everyone.  This one hung in the foyer at the front door of the Wrentham House.  Whenever someone new came for a visit, he wouldn't mention it but sometime later in the evening he would always ask them if they noticed the picture in the foyer. They would admit they did. Then he would ask them, "Do you remember if the man had a mustache?  Nobody knew.  Everybody blushed.

Hanging in the livingroom was his Adam and Eve, the perfect expression of his combined spirituality and sensuality. 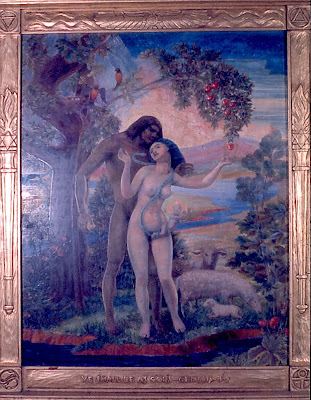 And he loved the Greek myths.  He loved Pan, the satyr. 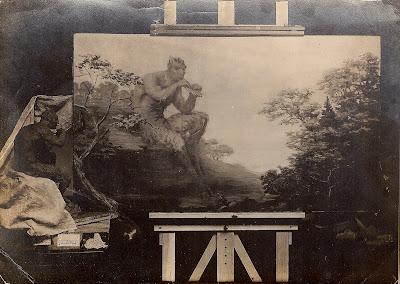 And the myth of Leda and the Swan. 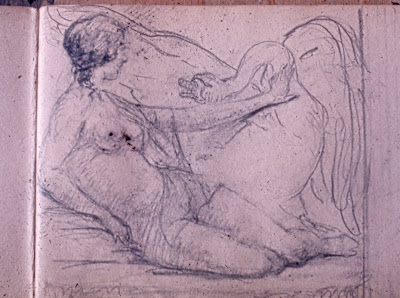 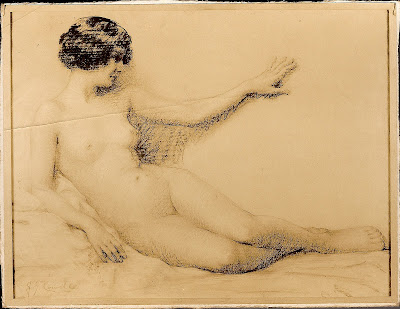 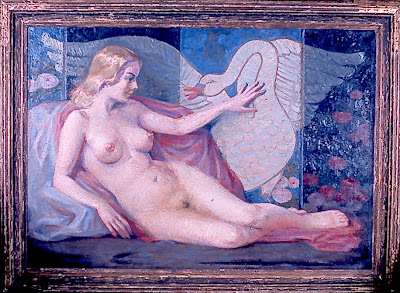 Your grandmother often posed for him. And you might not want to admit it, but she was really built! Take a look at these two old photographs he took of her!

YOU SAID YOU WERE ONLY GOING TO POST THE CLASSIC ONE! 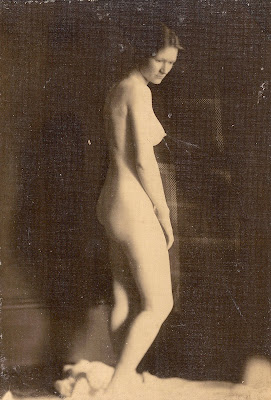 BAGMAN:  And the one below is my favorite!
(Editor’s note: I’ve deleted the second one out of decency and respect because it is too revealing)

BAGMAN:  Don't get too high and morally mighty, Mark.  You kept the photo!

And then there was your mother!  Several of your friends mothers who were high school friends with her used to talk about skinny dipping at the lake.  She would have loved Woodstock. 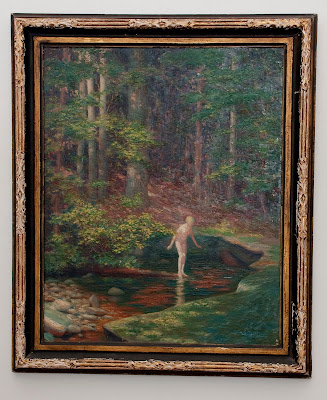 This one is impressionistically modest because

she was his daughter, after all!

Yah yah…anyhow your Dad told you about how he had sent a friend of his, a young Puerto Rican man who wanted to learn to paint, to your grandfather for lessons. The guy arrived at the studio and your grandfather set him at an easel and had a young woman there posing in the nude. Then after awhile, he said he wanted to make some sketches himself and asked the guy to pose too. Also nude. So when the two people were both standing together nude, your grandfather turned and walked out of the studio turning out the light.

(I’m not sure I ever really believed that story.)

Of course you did! It was right up your granddad’s alley. He loved to stir things up. Remember when you were in high school? He was doing portraits on commission, many of attractive young women…

(They were always proper formal portraits!!)

Of course, Mark, you doofus! But while they were posing he had lots of time to talk to them and often got around to suggesting that they should sleep with you…

Don’t lie just because you’re embarrassed! Heck! A couple of them told you about it. In fact one of them thought it a good idea.

Because you were too dumb to read the signals and I hadn't entered your life yet!

(I think I made a mistake in letting you write this segment. It’s not right! This is my grandfather we’re talking about!)

Yes. And he was a great man. But he wasn’t a priest – he was an artist. And he was a product of Paris’s Left Bank in the roaring 1920’s and, believe me, that makes your hippie dippie 1960’s make love not war stuff look like Kiddy-land! He had his share of lovers…

(Don’t say that! He was married to my grandmother!!)

Calm down, Mark! And tell Butler to shut up too because I can hear him screaming from his room! Your grandparents loved each other totally and were committed to each other for over fifty years until his death did them part. You know! You grew up with them and they had one of the best marriages you’ve ever seen. But they both had a very open marriage.  They both traveled alot for art commissions or music tours and neither of them had an ounce of jealousy.  They accepted each other for who they were and it might not have worked for other people but it worked for them.

But I want to tell about the one about when he was in his eighties and...

(No. I think this is a good place to end.  But I do have to admit that he was a very sexy guy in addition to being a great artist.)

BAGMAN:  That's how you ended up with me in your life...lucky you. 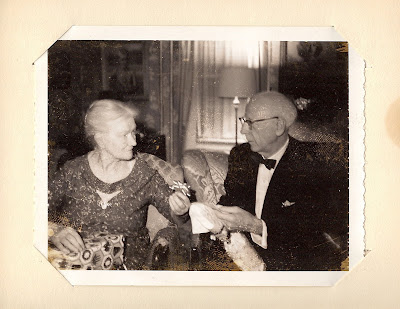 And they really did love each other unconditionally until death did them part.