So anyway, it is about 6:45 a.m.   There's alot going on in my life and I've had to take a day off from work and Brian, who spent the night with us, spent the night coughing constantly -- so I'm running off early to get some cough medicine at Wal-Mart when something catches my eye in the corner of the garage. 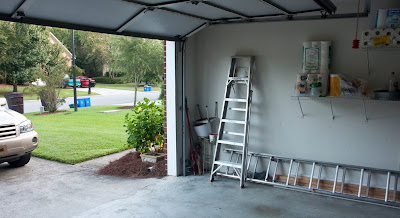 Corner of the garage
I walk over closer to take a look and suddenly say to myself, "Wow.  That looks like a black widow spider!"
The Bagman voice inside me yells for me to get the camera!  I have only seen a couple of black widows in my life and the chance to catch a bit of rare animal life is a big deal.  The Butler voice inside me suggests that I be careful because you really shouldn't fool around too much with these things.
But the actual practical voice in my head says that my son is upstairs coughing his lungs out and the spider it quietly sitting in her web and will still be there later after the sunlight is better and Brian is not coughing so much.
So I drive to Wal-Mart, get the cough medicine, come back, give it to Brian, get my camera, and go back outside...stealthily approaching the poisonous arachnid's lair. 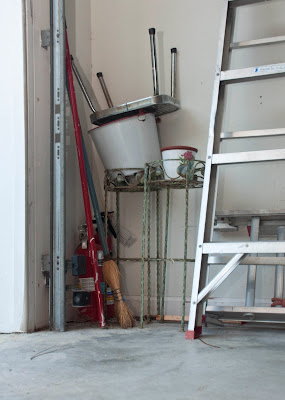 Poisonous arachnid's lair
Wimpyness, which has developed as I have grown older, had convinced me to start with a normal lens rather than poking around with a close-up lens...which I might try next after determining that I wasn't being led into a trap where two hundred steroid enhanced mutant black widows would drop from the ceiling and eat me.   It was just a slow moving black widow, after all.
But where was it? 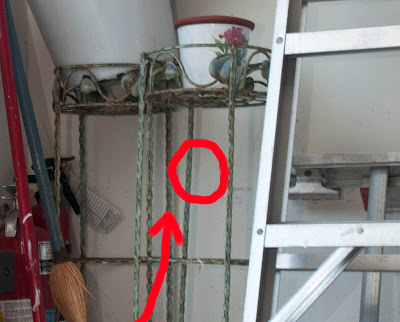 Don't strain your eyes -- it's not here although
this is where it was...
Dang!
Earlier, it had been so motionless and calm and peaceful (and poisonous), I had assumed that a short trip to Wal-Mart wouldn't matter.  Now it was gone.  Once again, I kicked myself for not taking the picture when the picture is there to be taken.   Lost opportunity.  One disappointed photographer.
Then, as I dragged back into the house, another thought struck me.  It had not moved to Miami Beach.  It was somewhere.   It was still somewhere.   I'm guessing that I will wear work gloves the next time I need the step ladder, the broom, the footstool, or the flowerpot.
And, next time, the cough medicine can wait for five minutes while I get the camera.
Posted by Bagman and Butler at 8:29 AM