It was very early in the morning and the sky was just getting light.  I had been hiding in the office, staring across my desk at Bagman and Butler.   Finally Bagman got tired of teasing me by singing "The itsy bitsy spider went up the water spout" song.   He humphed and stood up angrily.


BAGMAN (standing up angrily): “What kind of wimpy nature photographer are you anyway!  Do your photographic duty!  Get out there, take a picture of the stupid bug, then kill it!”

After carefully weighing the consequence between being bitten by a black widow and feeling like a wimp, I got the camera and headed out to the garage. I had concluded that Aragog came out at night (comforting thought) and if I was going to shoot her, this was the best time.

And there she was!

Hiding behind the car, I adjusted the bounce flash and fiddled with camera settings and prepared to move out…

BUTLER: “By the way, Mark, did you ever stop to consider that the egg sack containing up to 200 spider eggs might have hatched in the meantime and that black widows like dark secluded places such as, maybe, the underside of the car you were hiding behind?”

Thankfully, I had not considered that possibility. Therefore, I was able to muster my courage and skulk boldly toward the corner where Aragog sat waiting.

BUTLER: “Impossible! How do you skulk boldly?”

You had to be there! Walking toward a black widow in semi-darkness with a camera can only be done by skulking boldly. In any case, I was soon in range, took careful aim, and the silence was shattered by a massive click. 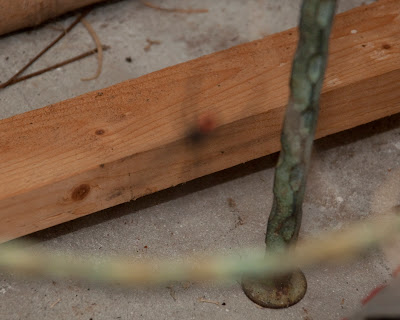 Damn autofocus!  Crisp focus on the board, however.
My Nikon can do almost everything but figure out what, exactly, I’m trying to shoot! Now I panic again because I’m sure the flash has sent Aragog running again.  And I can’t see if she is running away from me or AT ME,  because the flash may not have blinded the spider, but it blinded me. But as I slowly regain night vision, I discover she is just sitting there, grinning and cackling in her teeny tiny witch voice. So I try again. Same result. I try to remember where the autofocus lock button is but I can’t remember and it is too dark to see it.

So I try manual focus. 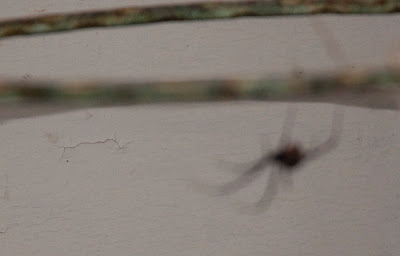 But of course, as I expected, my human ability to focus disappeared long ago. Amazingly, she is still there, so I finally give up and just start blasting away, zooming in and out, praying that the Nikon’s autofocus will finally discover and focus on the spider by random luck.

Flashes and clicks fill the garage by the dawn’s early light.   I'm loudly singing a deranged anthem: "By the strobe light's red glare!  The clicks bursting in air!  Gave proof throught the night that Aragog was still there!"   Until, finally, my wife pokes her head out the door and says, “Have you got rid of that spider yet?”

But later, after deleting 157 perfectly focused shots of the floor boards and wall cracks, the Nikon gives me one shot where it somehow, purely by accident, stayed focused on Aragog. 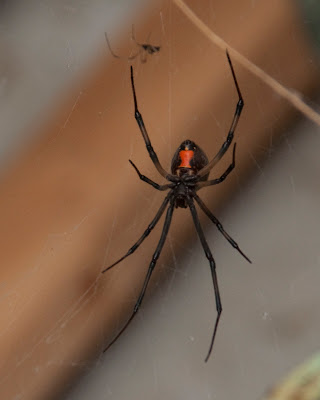 And then I realize why she hadn’t moved. Because love is blind and her next lover moving close to her, bringing flowers and hoping for the moment to be right for consummation. Not that he would live long enough to brag about it to his buddies. But at least he would provide her with another egg sack of 200 more eggs.

Maybe it was time for me to exercise whatever killer instinct I still  retain.

Tomorrow there must be no more Mister Nice Guy.
Posted by Bagman and Butler at 6:09 AM