Subtitle: Why I hate sales.

I have never liked shopping very much.  The worst day, of course -- or what many people consider the best -- is the day after Thanksgiving.  "Black Friday" it is called.  Retailers fight each other to start their biggest financial quarter of the year with big Sales.  They open their doors at 4 a.m. or earlier.  Some have midnight sales.  The first 200 or 100 people in the doors can get incredible bargains.

Two years ago a sales clerk in New York City was trampled to death by bargain hunters.

My wife and have almost always gone to some of these.   One year we almost had a good time.  I usually go to make sure that Karen isn't injured -- or maybe to make sure someone in front of her isn't injured.  Every year, I swear that I will never go to another Black Friday sale.

So what was I doing at 2:00 a.m. crawling out by myself!  It's a long story that started out with me volunteering because she had to travel to see her brother (I'm such a nice guy) and ended up with her not traveling, but having Noah here so Brian and Melody could go and the choice between changing diapers and going to Black Friday, well... (maybe I'm not such a nice guy).

Pulling into the parking lot, I realize that Karen, once again, has read all the sales papers and chosen the absolutely best deal on the planet.  Because everyone on the planet is already there. 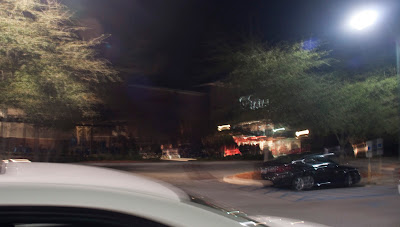 So here is my one and only photo for this week's shoot.  There are already over 150 people there!  I realize that despite being almost two hours early, I'm probably late!   I shoot one shot from the window of the car and jump out to ﻿join the line, hoping that most of these people want to buy one of the other items on special sale.
People have been camping out.  They have little tables and are working on laptops.  They have food.  I want to bring the coffee I brought but do the math -- two cups of coffee, zero Porta-Pottys -- and leave the coffee.
The line continues to grow.  Around me I hear people talking about the great sale on the...uh..."Thing".
My heart begins to sink.   But I make friends with people around me.  I hear way too much information about the marriage of a loud-talking woman several groups behind me.
Time drags in the middle of the night, sitting on a cement sidewalk.
Then the doors finally open.
If you watch this stampede, near the end, you will hear a female sales clerk calling out, "Can we get somebody down here!!"   This was because a fist fight was breaking out over one of the last "Things" available.
They are all welcome to them.  I turned around at the end of the video and left the store.  I was also suppose to get a wool hat for Karen at a savings of $5.00.   I'll pay full price somewhere else.
I'm never doing this again.
Merry Christmas.
Posted by Bagman and Butler at 6:31 AM