"For one thing," said Barclay, "I have been more easily irritated than usual by people who complain about small things."

This is understandable since he is just back from five months in the Sudan, working in refugee camps and going to sleep at night with artillery fire in the distance.

"And the fact that water just comes out of the tap," he added.

BUTLER:  "You might want to mention who Barclay is."

Anyhow, unpacking his stuff from his Land Rover, he pulled out a huge box and said, "You're gonna die."

He didn't mean that literally, of course, but that I would die of envy.   He will be staying with us for a couple of months as he finishes his last months of work with a rotation at MUSC, prepares for his final Boards, and works on a project that the U.N. contracted him for, having to do with analysing satellite GIS data and interfacing it with health and mortality statistics and something to do with DALI (which, I gathered, is not the artist).

And I may not have died of envy but I certainly began suffering major symptoms of envy as he unpacked his computers -- top end Apple, top end Mac laptop, and a 28-inch screen. 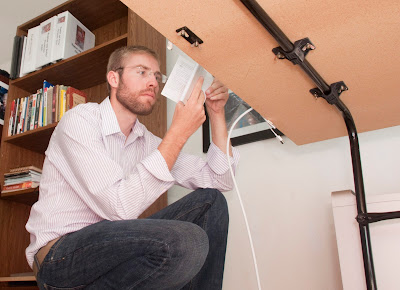 So how do we put this thing together? 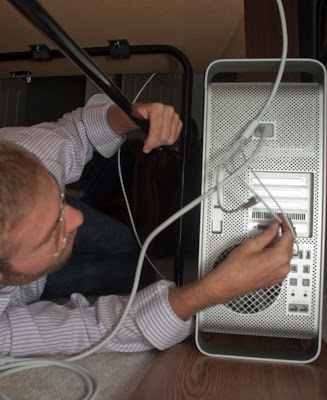 Crawling under the ping pong table to attach wires.
But when the time came to turn on this monster, the screen was blank!   Endless fiddling was followed by a call to Apple's tech staff.  Hours of talk befuddled Apple's experts as well!  Finally an appointment was made to take the stuff back to the Apple store.   As he began to unplug it and rebox it, he noticed the plug to the monitor wasn't all the way in and gave it a slight push.  Bingo.
Nice to know that great minds can forget to plug things in! 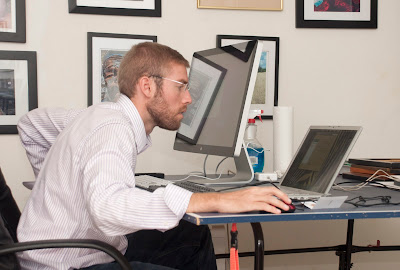 Up and running!  Synching laptop to the monster.
"So how did you run your laptop in the Sudan if there was no electricity?" I asked.
"I wired it to a truck battery."
That probably explains his current difficulty with plugging things into normal outlets.  We went downstairs and marvelled at getting water out of a tap.   "Do you need me to explain how a toilet works?" I asked.
Posted by Bagman and Butler at 7:37 AM