I've been seeing more and more blogger-photographers putting little copyright symbols on pictures they post and it makes me wonder why I don't do it.

And partly because I realize that I've already posted over 1,000 pictures on Blogspot and know that they never go away but get stored in some Google picture place somewhere.  In fact, the other day, I was going use a picture I took on my cellphone as wallpaper on the cellphone and I saw an option that said Blogspot on my phone.  What?  How did that get there?  So I pushed it and suddenly had the option of over a 1000 pictures show up on my cellphone.

And I also read someone's blog several months ago where they were driving through some European city and suddenly saw themselves and their family on a billboard!  It had been lifted by the advertising company from the Internet. 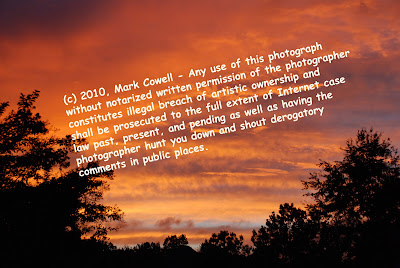 So I designed my own copyright watermark...although I don't think it is actually a watermark.  I probably need to read my Photoshop Book to find out what a watermark actually is.
But I probably won't.
Lazyness, of course.
And also because I don't really much care if someone takes one of my pictures and makes money off it.  I suspect I am in the minority.  But there have been times in my life where I have worked at making a living off writing and photography.  The money was meager.  And mostly it took all the fun out of it.
I appreciate other photographers that do it.  I actually enjoy the creativity some people put into designing a nice copyright thingy for their posts.  But, I think I'll pass for now.
Posted by Bagman and Butler at 1:05 AM