The Fall “Catch a Leaf” Ritual

The old family homestead where I grew up in Wrentham, Massachusetts was called “Maple Farm.” It wasn’t much of a farm but there were a ton of maple trees around the big back yard.
So, around the age of 12 or 13, being the self-absorbed ego-inflated boy that I was…
BUTLER: “Was? You still are! You and Bagman, both.”
BAGMAN: “And you too, Butler! You think your perfectionism isn’t related to ego?”
…anyhow, I decided that pumpkin carving was okay but what the world really needed was a new fun-filled Fall ritual. So I made one up called "Fall Leaf-Catching.”
The idea was simple: At some point in Autumn, you had to go out and catch a leaf that was falling from a tree before it hit the ground. Then you put the leaf somewhere secure where it will never touch the ground. By doing this, you ensured yourself a year of good luck. 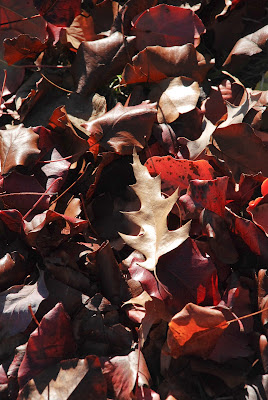 I think I invented this ritual really to give myself an excuse to run around in circles trying to catch windblown, zig-zagging leaves, diving heroically onto the ground at the last moment, impressing grass and mud stains forever into my clothes. I figured that if one leaf brought good luck, a thousand leaves would bring even better luck, so the game could go on all Fall.
I taught this ritual to all my friends so that they could teach it to their friends and it would eventually be known around the world. And mostly because we could all run around in wild circles, crashing into each other, laughing, and creating even greater laundry challenges for our parents.
I don’t think this ritual ever really caught on worldwide, but I continued to do it into adulthood although with progressively less and less running and diving. In college I taught it to a few girlfriends, mostly because it was a cheaper afternoon activity than dinner and a movie.
But the fact is, while it never became as popular pumpkin carving, I still do it in my sixties although it now contains no running at all and mostly relies on the number of leaves falling and the statistical probability that one will eventually hit me. This year, I caught one by complete accident while riding the riding-lawnmower. But I dutifully tucked it away in the corner of the shed.

Another year of good luck ahead of me. Hooray!

And who knows? Now that I’ve put it out there in the blogosphere, perhaps it will catch on.
Posted by Bagman and Butler at 5:25 PM