Barclay is the son of my wife’s best childhood friend. Although I’ve watched him grow up from a small tyke who calls me Uncle Mark, for the past several years I’ve watched him go through Medical School and he has now finished up a Master’s in Public Health in London. He has little interest in the traditional medical career and has a passion for working in third world countries. He has become my number one hero.

And he is going to stay with us for a few months!

So we went up to change the sheets in the guest room.

And decided we should move in a bookcase from my studio.

Which led to the need to clean out one of my bookcases…and the top of the pingpong table I use for matting and framing pictures.

And since it was clean and could be folded up, we decided to get out the carpet cleaner and clean some spots that have periodically been donated by Daisy when we don’t get up early enough to walk her.

And since the carpet cleaner was out, we thought we’d do Barclay’s room…and our bedroom…and the stairs.

And since the furniture was getting moved for the carpet cleaning operations, why not completely re-arrange the furniture throughout the entire house.

The Honey-Do list really is like an atomic bomb where one small atom hits another atom which splits and hits more atoms (I know that Nan will correct me on the real science of it) and Boom!

At one point I went outside, gasping for air, and noticed by the side of the house a shingle. I was trying to hide it and throw it discreetly in the trash bin but Karen saw me. Next weekend I’ll be replacing the roof.

But when I get a moment, I’ll regale you with tales from the adventures of Barclay. 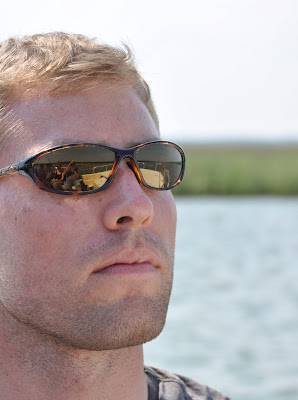 Barclay’s coming! Hooray! And the guest room couldn’t be cleaner! Then again, it could be overkill for Barclay who sometimes spends months sleeping on the ground in Northern Kenya.
Posted by Bagman and Butler at 7:11 PM