I don’t even understand this one myself. My wife says she gave up trying to figure out why I do things years ago.

But and I had just come inside after putting the finishing touches on the bricks and pine straw around the flowerbeds that the dogs tore up. even took a nice reasonable photograph which is reasonably posted below: 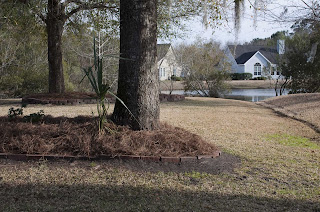 went off to calculate something, I didn’t know where Bagman was, but I was tired and needed a shower, so I turned on the water, took off my dungarees and tossed them toward the clothes hamper. As they floated through the air, they billowed out in an interesting way and suddenly Bagman was erupting in my head. “Throw pants! Throw pants! Bagman wants to throw his pants!”

So I humored him. I put my dungarees back on and got the camera while he took his pajama bottoms off and ran around throwing them then roaring, “Aha!” 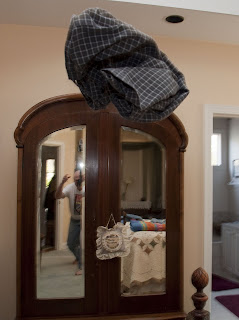 Maybe after spending two days placing bricks in a line, this was a release. Pants landed on Sally, landed on furniture, tipped over lamps. Bagman started screaming about photo manipulations and Photoshop and artistic genius and dropping a whole basket of laundry from the roof during a sunset. 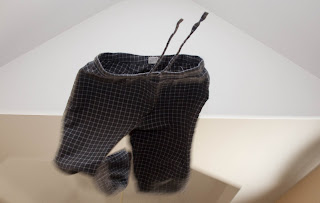 My wife came into the living room at one point, either to compliment me on the yard or because she heard a lamp falling over and wondered what I was doing. 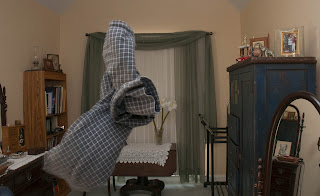 “What are you doing?” she asked.

“I gave up trying to figure out why you do things years ago,” she said, leaving and shaking her head, then looking back to add. “But please be careful with the lamps.” 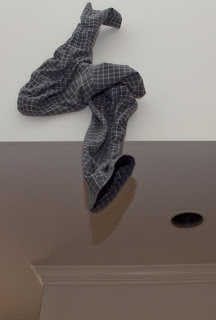 I finally ran out of either digital memory or patience and went to walk Sally and then to spend some time with Karen to try and convince her that I wasn't completely nuts.

Bagman is still thinking there must be some way of turning these pictures into art. But I think I agree with Karen. I can’t figure out why I do some things either.

Posted by Bagman and Butler at 7:28 AM