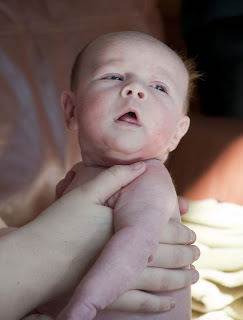 Bagman and emerge from the house to loud cheers from people gathered in the street. Some are waving signs that say, “Congratulations, Grandpa!” Older friends who knew the whole history were doing that half-nodding, half-smiling, squinty-eyed expression of deep love and gratitude. Others in the crowd were laughing at Bagman who was clearly scanning the crowd in search of ogling material.

Bagman pumped his fist and leered. just looked tired. From the spectacle behind him, through the door, the crowd could understand why. Rooms emptied of furniture moved to the new place where the kids and (say it slowly now) grandson would be moving. Floors littered with white fabric squares of every size…wipes, bibs, washcloths, shoulder throw-up protectors, towels, blankets (officially called “blankies”), and other unidentified pieces of cloth, all decorated with cute pastel blue and pink pictures which provided an artistic counterpoint to the yellow and green stains.

The crowd could also see the shreds of weather-stripping that had been torn from the garage doors by the three dogs.

Stepping up to Bagman who was now dancing around like a winning prizefighter, the news reporter asked: “It’s good to see you back again. How has it been in there?” 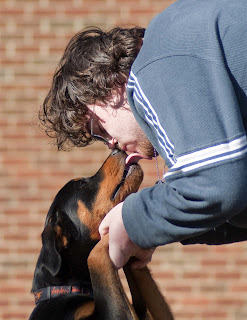 (muttering from behind Bagman): “What a mess. We’ll be cleaning up for weeks. I’m afraid the smell of canine excrement will be in the garage permanently. And we still need to build a fence at the new apartment and get a shower curtain rod and ”

BAGMAN: “And we got them a car! And Brian hugged us!”

: “The air conditioning didn’t work and we need to find out about the brake pad shims and timing belt and…”

BAGMAN: “We managed to muscle their sleeper sofa up the stairs and over the banister…Brian and me! Sweating together! Father and son!”

: “You almost broke the banister.”

BAGMAN: “They are moving in with our sister-in-law!”

: “God bless her! Brian, Melody, 1-month old infant, three dogs. At least they will be paying rent after they get back on their feet.”

just rolled his eyes and turned and went back inside where he began sweeping up pieces of plastic. You could tell that if they were smooth they were suppose to go into the baby’s mouth to feed of pacify him and if they were jagged they had probably come out of the dogs’ mouths. It was important to keep them straight, thought. Another thing to worry about.

Outside, behind him, he heard the crowd suddenly make a loud roar. What was Bagman doing now. didn’t want to know. There was still too much to do. It had been just over a week since the family had returned and really didn’t want to screw it up this time…again.

Posted by Bagman and Butler at 7:17 AM