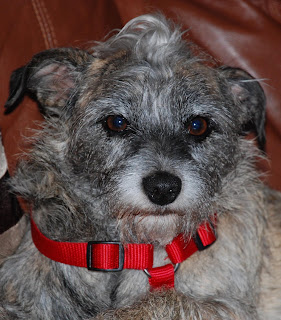 So here’s the deal. The prodigals have just moved to the upstairs apartment in my sister-in-law’s house. Brian is on his third day at a new job and was asked to work late. So the only alternative is for us to bring the dogs to their new home.
BAGMAN: Yippee!! Hooray!! I love dogs!!!
BUTLER: How will they all fit in the car? Will they let us even get near them, let alone pick them up? Will they pee all over the back seat? Did Brian feed them before he left? It will be midnight before we get back, how will we get enough sleep before work tomorrow?

But without a better plan, Karen, the long-suffering and often confused wife of the bipedal protoplasm inhabited by Bagman and Butler, positions herself at the back of the SUV while I bring the canines, one by one from our back yard.

I start with Roxie, the Rottwieller, because she is the biggest and seems to like me the most. She is excited to be doing anything and jumps right into the car although she is a little clumsy because she is simultaneously trying to lick my face from mid-air. While Karen keeps her from destroying the back seat, I run around and get Rosie, the long lean sleek orange something-or-other. Rosie seems convinced that contact with any human besides Brian means certain death. Fortunately, she isn’t a nipper or a growler, but she makes up for it with almost double-jointed squirming expertise. Karen shuts the back and I go to get Daisy who will ride with me in the backseat while Karen drives.
Daisy is a cross between a German Schnauzer and a Virginia Opposum, with multiple personalities, a kind canine version of Bagman and Butler but smaller and uglier. She comes to me quickly, licks my hand and nervously urinates, but when I pick her up she suddenly barks, leaps up, plants her teeth firmly on my forehead then fortunately decides not to actually bite but just gnaw at my skin a little, probably the opossum in her blood.
It is all a blur. Karen is driving without a care in the world. I am in the back seat with Daisy tap-dancing in my lap, her little tongue doing a Jackson Pollack painting on my face while Roxie, whose tongue is like a large washcloth is totally soaking the back of my head and neck. At first I think it is accidental, but after the third time I realize that Daisy is premeditated in the way she licks around my face and then suddenly tries to flick her tongue up my nostril.
BAGMAN: “Go, Daisy, GO!”
By the time we pull into the prodigals’ new house driveway, I’m a defeated, sodden heap in defensive pre-natal position in the back seat. Karen turns around and says, “That wasn’t so bad was it?”
We settle them down, kiss the baby – actually only Karen kisses the baby since I’m far too saliva’ed to be allowed near the baby – and start back home. Karen asks me to drive back since she drove over. Somehow it doesn’t seem quite fair since the car is now quiet and peaceful. But I’m easy so I belt up, start down the road and realize things don’t seem as clear as usual. Only then does it dawn on me that sometime during the 45-minute tongue assault, my glasses disappeared. For all I know they could be in Roxie’s stomach or Daisy might have pushed them
into my sinus cavity.
BAGMAN: “Bwaaa Haaa Haaa!”
BUTLER: “Check under the back seat. The cup holders. Call Melody to check the back yard and driveway. You have a spare in the desk. The optometrist opens at 9:00 a.m. You’ll need a flashlight to check the backyard at home. Are the batteries fresh?”
BAGMAN: “Shut up with the logistics already!”
But I find them pretty quickly back home after deducing with Sherlock Holmes precision that the indentations from Daisy’s teeth near my temple correspond to where my glasses usually sit. They are right where she knocked them off. It is midnight, I’m exhausted, and ready to fall into bed.
“Not before you take a shower,” Karen says, already under the blankets.
Posted by Bagman and Butler at 4:12 PM