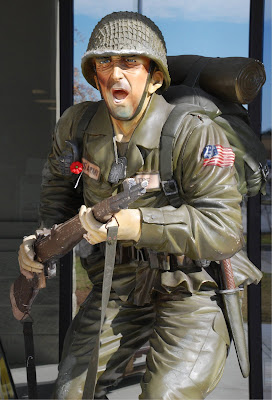 COMMUNIQUE FROM THE FRONT:

We are currently dug in, entrenched in reality, so far way from my bloggy friends that I’ve lost touch. We are taking incoming so frequently that I can’t keep up with what you are all doing on the homefront. I tried to go out on a night patrol last night but was only able to read two blogs before having to retreat back and defend the perimeter from another sneak attack by the Roxie and her troops.

Tactically, Bagman, Butler, and I plan to get out short messages just to make sure you all know we are still alive. Getting very little sleep. Legs tired from walking dogs in moonlight.

Karen (code name “Kilo One”) and my special forces (code name “Bravo Bravo”) have divided forces to implement a troop surge today on two fronts. In addition to Roxie’s use of IED’s (Improvised Excretion Devices), the animals have managed to infiltrate our lines of defense with fleas – intelligence estimates the number in excess of 5,930 battalions. Bravo Bravo dispatched to bomb the house. (Oh, if I could only use real explosives instead of flea poison bombs!!!)

Simultaneously, we have received request for transport and care of Conner overnight. Kilo One will head up that operation after removing canines to a safe location for the day.

So Kilo One has driven off in a car that is rocking back and forth as dogs leap around from window to window. In the house, the temperature is quickly rising toward the upper 90’s with 100% humidity. Air conditioning has been turned off. Windows closed, ceiling fans deoperationalized. Cats have been transported to the closed garage where they are hiding behind the freezer. Sweat pours down my forehead (and face (and chest (and everywhere else))) as I move through now empty silent rooms setting canisters on chairs in the middle of each room.
After putting my work stuff – computer, camera, papers, folders – in the car, trying to shower and dress but sweating just as much after the shower as before it…I start on the second floor, working fast, shaking each canister, pushing and setting the trigger. Loud hissing grows as each room begins to fill with a poison gas.

I begin to hear the tiny screams of millions of fleas.

After setting off the last canister and backing out the door, I remember the smoke detectors! Oh crap!

Holding my breath, I dash inside, avoiding direct spray, grab the first one, duck low and take a breath through my shirt sleeve…run upstairs, unscrew and remove the second one…and run outside gasping. 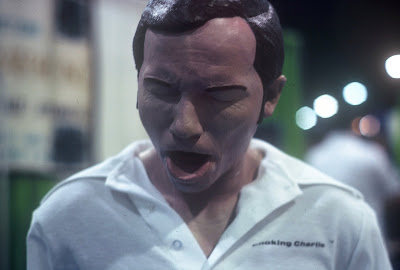 My dress slacks, shirt and tie now carry the smell of flea bomb. It smells like I just poured gasoline all over myself. I think briefly of just going back in the house, putting on some soft music, lying on the floor and crossing my arms over my chest. It passes.

Wait! Did I turn off the fan in the bedroom?!! Oh crap again!!! But instead of running inside again, I’m smart enough to walk around and look in the bedroom window. It’s off, thank God!

Backing the car out of the driveway, I see fleas leaping to their death from the second floor windows. Not that the fall will kill them…they are fleas, after all. But Bravo Bravo company is wily and sprayed the yard last night with more poison to close off escape routes.

Driving to work, I congratulate myself on winning the battle. But the war continues. Tonight after the house is aired out, we return to additional sleep deprivation. Karen will have Conner and the cats in the closed off master bedroom and I will have the dogs and the livingroom couch. I wonder what Karen looks like these days. Maybe I’ll send her a post card.

I wonder if Conner’s diapers would fit Roxie.

I wonder how we’ll get the cats from behind the freezer in the garage.

I wonder how much sleep deprivation it takes before the hallucinations come. I ask the Jolly Green Giant riding beside me in the car but he’s talking about frozen peas. I don’t want to ask him whether that is spelled “pea” or “pee”.

I wonder if anyone has heard from Reggie Girl and how Barry is doing these days.

I wonder if fleas have invented gas masks.

I wonder if I’ll post any more than the four mediocre pictures I have for Friday’s shoot-out on “Things people have in their front yards”.

I wonder if I can photograph a pile of dead fleas.

And I wonder at how, through all of this, my love for Roxie keeps growing. (Last night she slept the entire time next to the couch with my hand on her back…except at 1:30 a.m. and 3:30 a.m. when we took walks).

Finally, I get to work in my nice air conditioned office. My clothes, soaked with sweat and flea bomb stick icily to my body. I say hello to one of my colleagues. He takes one look at my puffy dark eyes and crazed expression and rapidly retreats. From a distance he asks, with political correctness, “Are you wearing cologne?” 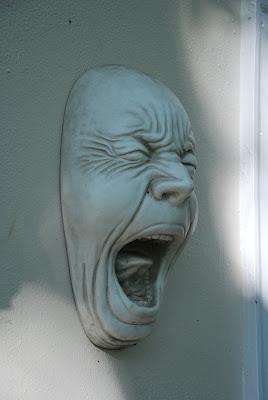